Home » News » With three of family dead, this youth has to rebuild his life 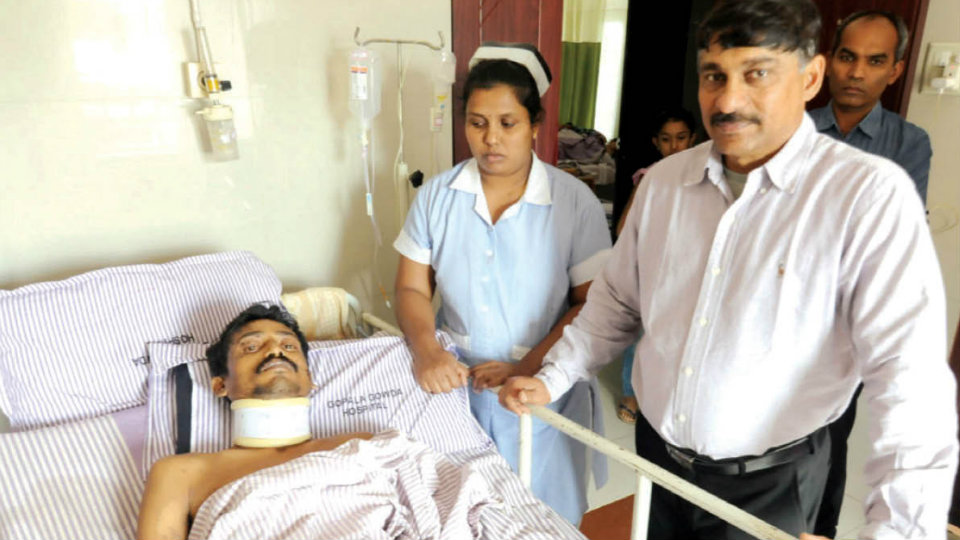 With three of family dead, this youth has to rebuild his life

Mysuru: His home built out of his hard-earned money was washed away right in front of his eyes by floods and landslides. Undeterred and with a presence of mind, he plunged into water to rescue his family members and saved them from drowning. And in the process, he had a providential escape from the jaws of death. Unfortunately, three members of his family are dead now.

This is the story of Yathish, who was admitted to Gopalagowda Shanthaveri Hospital in Mysuru. Doctors who treated him have advised him bed rest.

Yathish and his family lived in Katakeri that is around 6 kilometres from Madikeri. On the night of Aug. 16, the family was under the threat of being washed away by raging flood waters and simultaneous landslips.

Yathish’s father Nanaiah, mother Kaveramma, uncle Appaiah, aunt Kaveramma, their son Pavan and his wife Usha along with their four-year-old child, and brother Jeevan were staying in a joint family with two houses next to each other.

On the fateful night of Aug.16, at around 3 am when the family was fast asleep, there was a loud sound from the hilly area where their house was located. It was pitch dark as powerlines had been snapped due to heavy rain and wind.

Sensing danger, Yathish sprang into action and saved his parents and brother and led them out of the house. He banged at the doors of his uncle’s house and rescued that family too. Moments later, their house was washed away by water that gushed from the mountains.

The family was caught in the strong water current and three members were washed away. Next day, Yathish’s parents were nowhere to be found.

Yathish was thrown away by forceful water and was found in a grievously injured state. An inconsolable Yathish’s sister Beena narrated that three members of the family were dead and Yathish was unaware of this harsh truth.

Yathish had built his house two years back and had taken a bank loan of Rs. 20 lakh. The family had grown ginger around the house and the crop was very good as it is a hilly terrain.

“We had hoped for a bumper crop this year and were planning to repay a major part of the loan. Floods and landslides have washed away the crop and all that is remaining now is mud and slush,” said Beena.

Yathish was unable to speak as he was seriously injured on his throat and his hands and legs were swollen due to the impact.

As he was unable to walk, Yathish had to be literally chair-lifted by his brother Jeevan and some villagers. He was taken to a relief centre at Madikeri and was shifted to K.R.Hospital in Mysuru.

At the K.R. Hospital, Yathish was denied a bed and was made to sleep on the floor where doctors had administered drips.  He was not even given a bed sheet. This upset the already-traumatised family that decided to shift him to Gopalagowda Shanthaveri Hospital.

Seeing the plight of Yathish and his family, the doctors and the hospital management decided not to charge any medical expenses. His treatment cost of Rs. 1.30 lakh was waived off and even the Rs. 30,000 that was deposited at the hospital during admission was returned to the family.

According to orthopaedic Dr. Umesh of the hospital, Yathish was brought to the hospital by Kurubarahalli Manju and Ravi. “At that time, Yathish had lost consciousness and his blood pressure had plummeted. I, Dr. Vinayak, Dr. Raghunath and  Dr. Lakshmikanth treated him in the ICU for three days. His throat muscles were twisted, nose and left hand bones were crushed. We had to do a surgery on Aug. 18 and his condition is better now,” he said.

Dr. Umesh added that after discharge (he was discharged on Aug. 22), Yathish has been advised to seek post-surgery medical intervention at Ashwini Hospital, Madikeri as it is impossible to make trips to Mysuru.