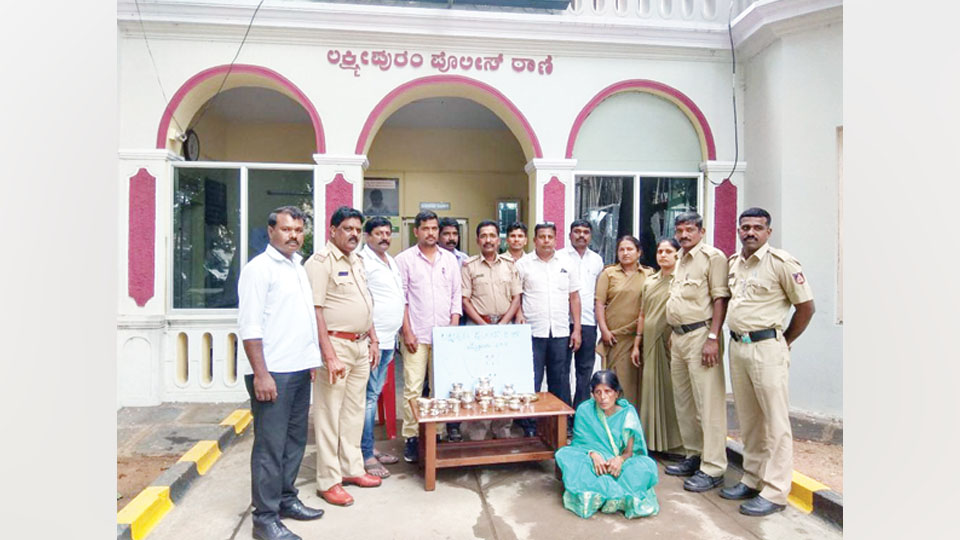 Mysuru: Lakshmipuram Police have arrested a woman on charges of committing thefts at Kalyana Mantaps (wedding halls) in city and have recovered 20 grams gold ornaments and 1,600 grams silver articles which she had pledged at various places.

The arrested has been identified as 50-year-old Shashikala, a resident of Sargur and she was caught by the Police at Hoysala Karnataka Sangha Hall on Narayana Shastry  Road in city.

Following complaints of thefts taking place in Kalyana Mantaps in city, the Police, who examined CCTV footages of various Kalyana Mantaps found one particular woman moving around in  all the footages and launched a hunt to nab her.

Following a tip off that the woman was sighted at Hoysala Karnataka Sangha Hall on Friday, Lakshmipuram Police, who rushed to the spot, nabbed her and on inspecting her bag, they (Police) found silver articles in it and brought her to the Police Station for interrogation.

During interrogation, the accused is said to have confessed of committing thefts at various Kalyana Mantaps in city and based on the information provided by the accused, the Police, have recovered some valuables which she had pledged at  various places.

It is learnt that Shashikala, has a sister who is physically challenged and an unemployed brother. All the three were living in extreme poverty and Shashikala had committed thefts for living. Shashikala has now been remanded to judicial custody.