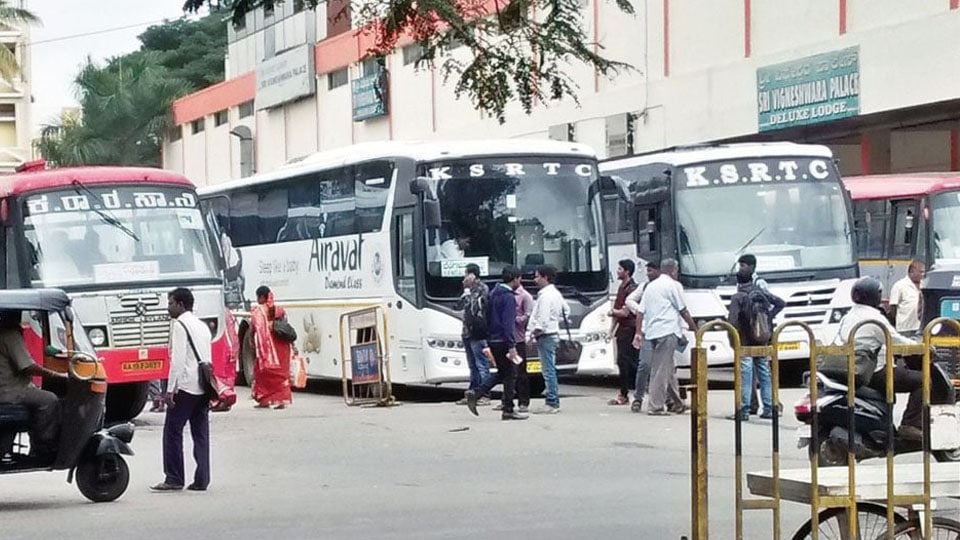 Mysuru: Commuters, beware if you are carrying gold jewellery and wads of currency notes while travelling in buses and other public transport as attention diverters are on the prowl. They employ novel tactics to rob the valuables and vanish without a trace.

These gangs, mainly consisting of women, are usually active during festive seasons when people are likely to withdraw substantial amounts of cash and carry gold along with them. But now, such gangs operate in all seasons. Some of the gang members are so proficient and deft that the victim does not even realise that the bag containing valuables has been opened and the gold or cash is taken out.

One such case where a woman, waiting for a city bus being robbed of gold jewellery worth Rs. 2 lakh, has been reported yesterday. According to Police, the incident took place on the busy Bengaluru-Nilgiri Road (B.N. Road) near Sub-urban Bus Stand.

H.L. Rakshitha, a resident of Manchegowdanakoppalu, was waiting for city bus on B.N. Road after she had alighted from another bus from Mandya. She had gone to Mandya along with her child on Wednesday evening to attend a relative’s wedding. After attending the wedding, she returned to Mysuru yesterday.

Rakshitha and her mother, who had also accompanied her to the wedding from Srirangapatna, boarded a KSRTC bus from Mandya. While her mother got down from the bus at Srirangapatna, Rakshitha headed towards Mysuru along with her child. To be on the safer side, she had put all her gold jewellery in a box and put it in her vanity bag that she hung on her shoulder. After alighting from the bus at Sub-urban Bus Stand, Rakshitha was waiting for a city bus on  B.N. Road at around 1 pm.

Criminals would have targeted her at this point, said the Police. Seeing the woman is holding a child in one hand and the vanity bag on the shoulders, one of the gang members would have approached her from behind and cleverly opened the vanity bag. After taking away the jewellery box, the criminal would have vanished from the place without even Rakshitha getting a slight indication that she has been robbed.

At this point, Rakshitha’s child asked her for something to eat. When she was about to take money from the bag to buy some eatables, Rakshitha was shocked to see the zip of her vanity bag open. She discovered that gold ornaments that she had kept in the bag were missing. The total weight of the ornaments is 66 grams worth about Rs. 2 lakh.

She immediately called her husband Jayanth, who lodged a complaint at Lashkar Police Station. The Police are checking footages of the area where Rakshitha was waiting for a bus.

Police sources told Star of Mysore that these gangs basically thrive on a huge network of relatives who are also in the same profession of robbing commuters. Organised gangs have settled on the outskirts of Mysuru and they operate in a network. While some members of the gang inform about potential targets, other members of the gang specialise in the robbing act.

In Rakshitha’s case, the jewellery box kept inside the vanity bag would have caught the attention of one such gang, Police said.