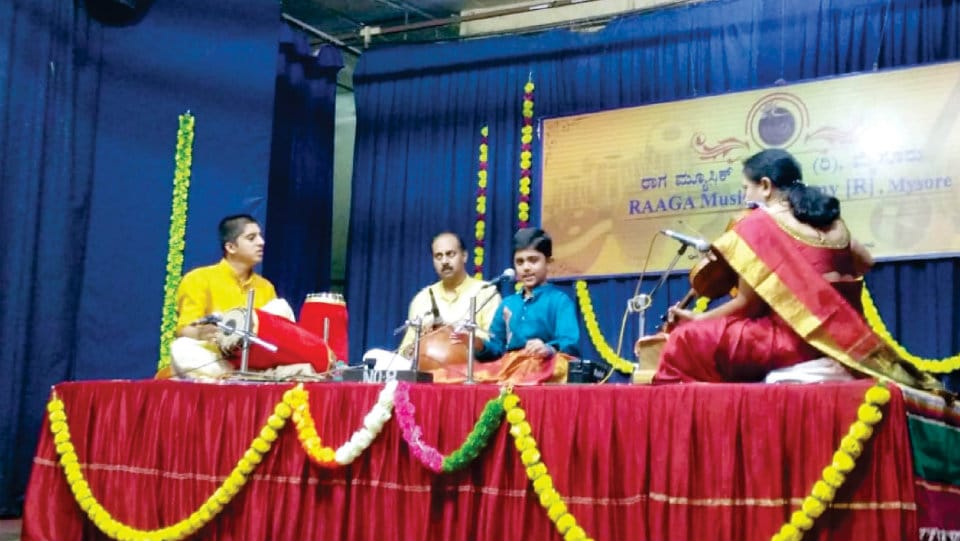 Eleven-year-old child prodigy Rahul Vellal is a YouTube sensation. But there is more to his music than what we see of his song videos in YouTube. It is a wonder how music is a way of life for this child even when their parents have no background in music. The effort and care this child puts in to hit the higher gamakas pronouncing each word with so much clarity is amazing.

Raaga Music Academy organised his concert at Nadabrahma Sangeetha Sabha on the 3rd Saturday of November. The hall was packed to see this wonder boy perform. Rahul created an out-of-the-world experience yet again with his two-hour concert. A striking feature of the lad’s concert is his imposing confidence. He sings without the least trepidation. His rendition was impeccable, pronunciation in each composition perfect and the sangatis fell in their place. Take for example, ‘Devadi deva Shri Vasudeva’ by Mysuru Vasudevacharya. The kriti was prefixed with a beautiful Alapana, there was a linear development of sangatis in the composition and the kalpana swaras developed for the pallavi part had all the characteristic phrases woven admirably. The subtle gamakas and flashing brighas in the Alapana of the very popular ‘Nagumomu ganaleni’ by Tyagaraja suited the occasion and the audience, who clapped in ecstasy when the composition was taken. The influence of Balamurali Krishna on the lad in the rendering of the composition was evident, especially in the choice of neraval at “Jagamele paramatma Everito moralidudu’ (Oh Rama! Ruler of the world! Who else can I appeal to? Please shun disregard and take me into your fold!). How a lad of eleven can sing the sahitya with so much bhava remains a puzzle. His parents have rightly named him Rahul, the conqueror. He has conquered the hearts of all music-lovers around the globe.

Young Nikshit Puttur on mridanga and Raghunandan on ghata gave a brilliant taniyavartanam, soon after which a series of requests rushed in to Rahul, out of which the first was, of course, ‘Brahma Okate Para Brahma Okate’ (Annamacharya), for which he has more than 6 million followers in YouTube.