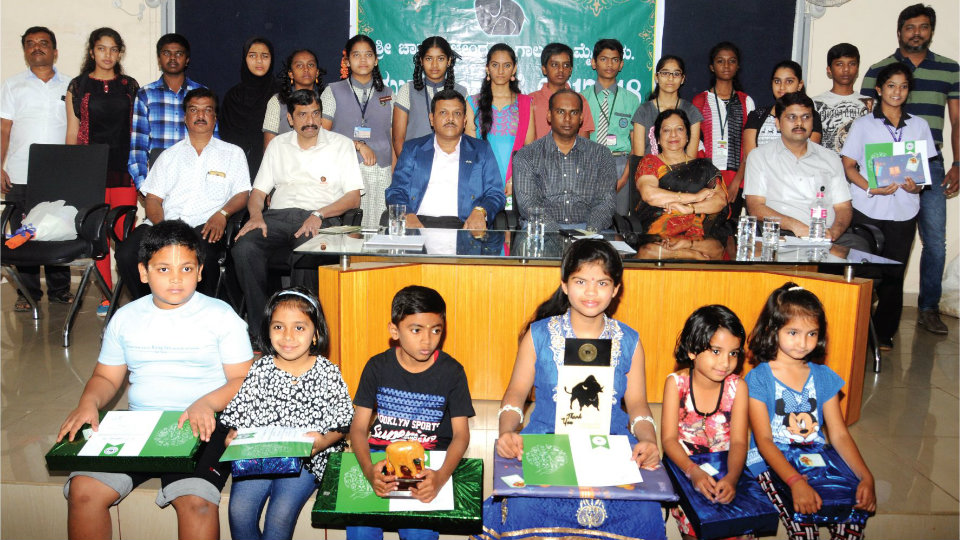 Mysuru: For members of the Mysuru Zoo Youth Club, 2017-18 will be a year to remember in their lifetime as they were educated in conservation of forests, wildlife, environment, behaviour of wild and captive animals, etc. as part of the Club’s activities for the year 2017-18. The valedictory of the Youth Club was held this morning and it brought down curtains on various educational activities conducted by the Club for its members during the year.

In all, 60 students in the age  group 12 to 18 years had enrolled themselves to Youth Club. Classes were held for them by subject experts. Members of the Club, drawn from various Schools in city, were introduced to wildlife and conservation issues apart from providing them first-hand experience in wildlife management as part of the Club activities. The objective of the Club is to rope in students and educate them about the importance of Conservation.

DC D. Randeep, who was the chief guest, said that more awareness should be created among the youth about the importance of wildlife conservation and environment protection so that they can build a clean and safe places not only for them but also for the wild animals which are important in the eco system and added that the Mysuru Zoo Youth Club was the right platform for youth to know more.

Stating that encroachment and destroying forests were leading to man-animal conflicts, the DC called upon everyone to protect forests and wildlife for the future generations. The DC also announced that he would be adopting an animal at the Mysuru Zoo soon.

Additional PCCF and ZAK Member-Secretary B.P. Ravi, who spoke, said that youths should be guided in conservation activities and added that the Club was working in that context.

Stating that conservation of environment has been forgotten in the name of development, he said that this had resulted in encroachment of forest lands which are not being protected to the best level. He said that wild animals are coming to urban places in search of food and water and added that everyone should understand their behaviour and should also learn how to send them back to the forest calmly without provoking them.

Prizes were distributed to the winners of various contests conducted by Zoo and certificates were given to the members of the Club. ZAK Chairperson Mallige Veeresh, Zoo Executive Director C. Ravishankar and ZAK nominated member K. Thukaram were present.