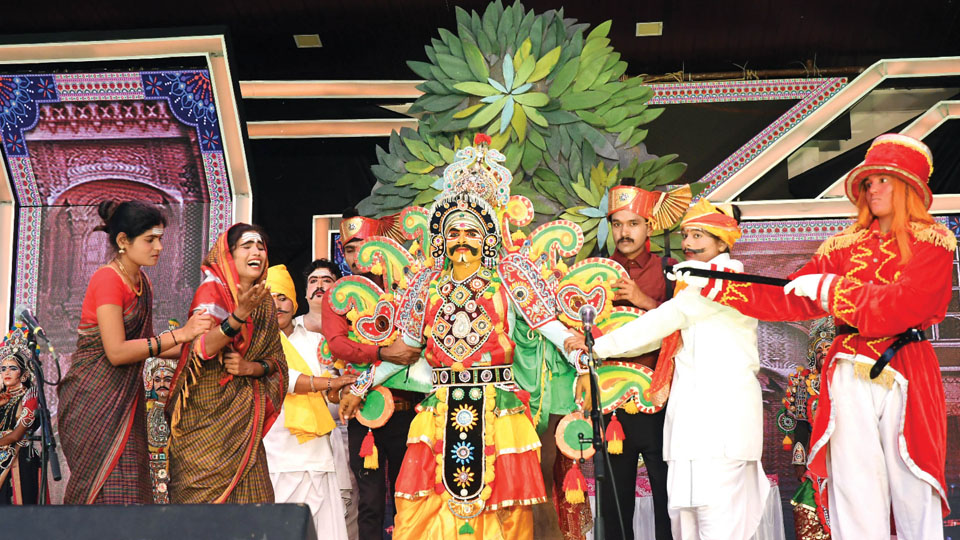 Mysore/Mysuru: The Yuva Sambhrama event being performed at the Manasagangothri Open Air Theatre every evening is a sure crowd-puller with daily themes of performances. While the dances and programmes focused on the theme of Kannada pride on Tuesday, Sept. 20, the performances on Sept. 21 were around the themes of environment and nature, patriotism and devotion.

The overall message was to save the greenery and its associated fauna for the survival of homo sapiens. Destroying the environment will lead to the destruction of human civilisation and it is not possible to eat currency notes or coins instead of rice were other messages.

The dance themes were well-coordinated by environmentally-aware youths, some of who will take policy decisions for the land in the future.

The programme began with the performance of students from Karnataka Folklore

University, also known as Karnataka Janapada Vishwavidyalaya, who enacted the heroic acts of Sangolli Rayanna against the treachery of the British.

Next, there were performances by Periyapatna Government Women’s PU College, Mahaveer B.Ed College, Hunsur, Mysore Medical College and Research Institute (MMC&RI) and Aloor Siddapura Government PU College in Somwarpet and all their performances centred around the environment, growth of forests and animal population. Whatever goes into nature comes back to humans, was their message.

A fervent message was sent by the students of MMK and SDM Women’s College who, through their performances, told the audience that women too deserve a fair chance and if provided opportunities, women will excel in all fields.