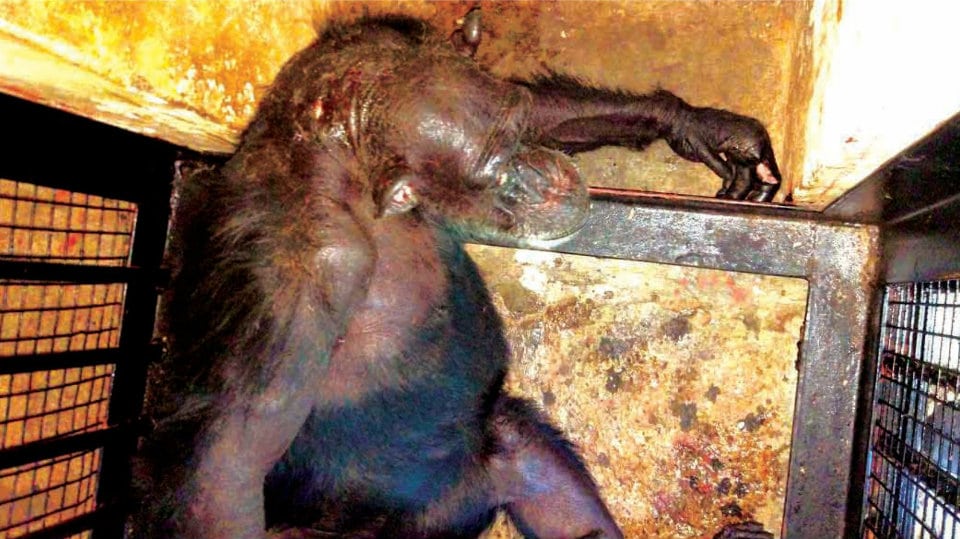 Mysuru:  A 58-year-old female chimp Ganga was injured when a male chimp attacked her about a week ago. The incident took place when animal keepers were shifting 24-year-old chimp Nesan to another enclosure.

It is learnt that when Nesan was being shifted, he began to scream which attracted the attention of Ganga, who came to the Nesan’s enclosure.

Soon, Nesan attacked Ganga and bit her on her hands, neck and thighs resulting in minor injuries. Animal keepers who rushed to the enclosure, managed to separate Nesan and Ganga and shifted them to separate enclosures.

Meanwhile, Mysuru Zoo In-charge Executive Director C. Ravishankar, speaking to SOM said that Ganga was treated at the Zoo Hospital and her wounds were sutured by the veterinarians. Ganga is recovering now, he added.

Ravishankar said that Chimpanzees usually live up to 50 years in the wild and added that because of timely food, good environment and other factors, Ganga is now 58 years.

He further said that Ganga was unable to defend herself as she has grown old and added that it is a usual thing for a senior chimp to be curious when younger chimps are in distress or crying and that is why Ganga had come to Nesan’s enclosure when he screamed while being shifted.

Ravishankar said that Crocodile keeper Puttaswamy, whose toes were damaged when a crocodile attacked him when he slipped and fell into the pond in the crocodile enclosure recently, was recovering at the hospital and would be discharged today evening or tomorrow morning.

He further said that the Zoo has taken care of his complete medical expenses.

Meanwhile, Puttaswamy who spoke to SOM said that the pain had subsided and the wounds were healing after the treatment and added that the doctors told him that they would inform him the date for the plastic surgery.