Home » News » ﻿New dumping yards to come up in Mysuru 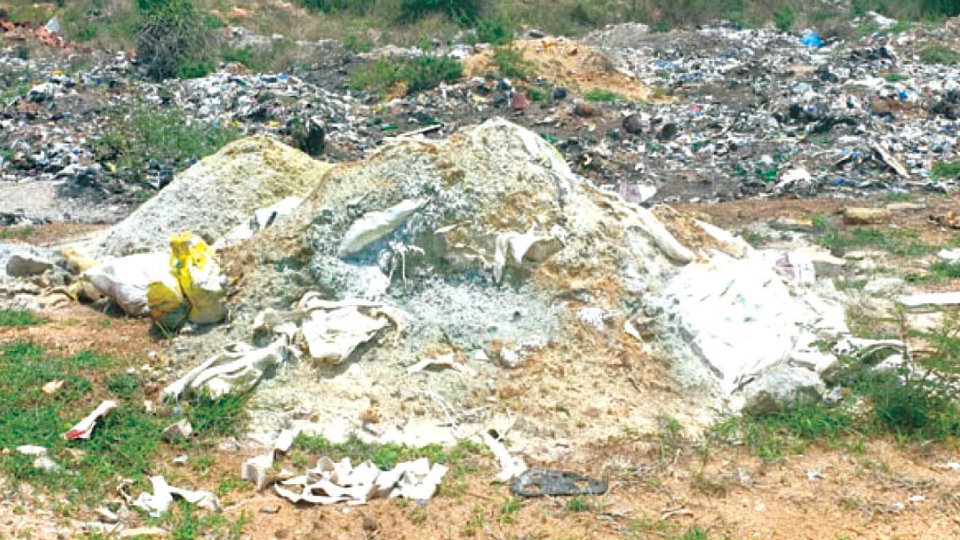 ﻿New dumping yards to come up in Mysuru

Mysore: In a bid to dispose industrial waste in a scientific manner, dumping yards are being established at four places in city. One more dumping yard is coming up in a two-acre land at Koorgalli soon. Also, a construction and demolition waste recycling plant is also poised to come up in the Mysuru City Corporation limits.

In the absence of a dumping yard, packing materials, plastic wastes, machinery scrap, batteries, oil, metal scrap and electronic waste, including computer components, was being dumped on the roadside, on the foreshore of the lakes or in vacant sites.

As garbage and other waste generated is not being disposed of from time to time, tonnes of garbage piles have stocked up at Sewage Farm in Vidyaranyapuram which has become a challenge for the authorities for effective disposal.

Hence, based on the directive from the Deputy Commissioner, Karnataka State Pollution Control Board, Karnataka Industrial Area Development Board (KIADB) and the District Industries Centre (DIC) have decided to establish dumping yards.

There are hundreds of small, medium, big and heavy industries functioning at 14 industrial areas in Mysuru city and surrounding areas — Yadavagiri, Hebbal, Metagalli and Koorgalli Industrial Areas. While most industries dispose only some waste through dealers, remaining waste is being dumped on the sides of the Outer Ring Road and other roads.

In this backdrop, Deputy Commissioner Abhiram G. Sankar chaired a meeting at his office recently and instructed KIADB officials to identify land to establish dumping yards. He also ordered to identify government lands and private ones so that the latter can be taken on lease.

READ ALSO  An appeal to SWR

Following the DC’s orders, KIADB officials are in the process of searching for land at Yadavagiri, Hebbal and Metagalli Industrial Areas. A two-acre land has been identified at Koorgalli and the land would be used for the dumping yard.

M.B. Prakash, Environmental Officer at the Pollution Control Board, speaking to Star of Mysore, said that large quantity of non-usable waste is being generated by industries at various industrial areas which were not being disposed of scientifically. “This not only posed a threat to the health of the local community but posed a danger to the groundwater table in the long run,” he said.

If action is not taken now, it would be as same as the Sewage Farm which would be a challenge. Hence the dumping yard is being established, he added. He further said that metal, paper and spare parts waste generated from industries are being sent for reuse.

“We do not want a mere dumping yard for industrial waste but we want to establish a full-fledged recycling and processing plant so as to recover as much of the scrap material for reuse as possible. The proposal is to ensure that nothing goes to the landfills in future and only such items that cannot be recycled may have to be incinerated under high temperatures,” said Prakash.

Regarding hazardous waste, there is immediate action as the waste is transported in concealed containers to Dobbespet in Bengaluru rural where there are facilities to handle it.

READ ALSO  No water for paddy, sugarcane; Water only for drinking, livestock

“There are 14 industrial areas in the district where small, medium, big and heavy industries are functioning. By establishing dumping yards, it would be easy to dispose the waste scientifically and problems pertaining to disposal of such waste would not arise in future,” he added.

The State Government has given its consent for a Construction and Demolition (C&D) waste recycling plant for city. MCC officials said that a revised Detailed Project Report (DPR) has been sought by the government which is fast-tracking the facility. It will have a capacity to recycle 100 tonnes of building debris which will be recycled to make tiles and other construction materials.

Six acres of land has been identified at Koppaluru on the Mysuru-Nanjangud road adjoining the lorry terminal and the authorities are confident of completing the project within six months from the date of final clearance. If all goes well as per plans, Mysuru will be the first city in Karnataka after a few Indian Metropolitan cities to have this plant.