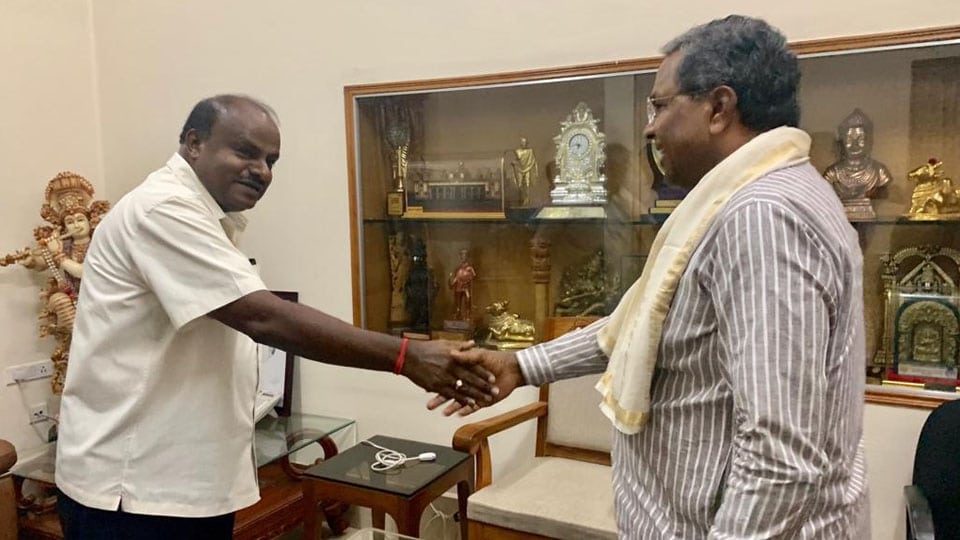 Bengaluru: Even as the JD(S)-Congress Coalition Government is sulking after the Lok Sabha poll results were announced on Thursday, former Chief Minister and CLP leader Siddharamaiah has assured Chief Minister H.D. Kumaraswamy of full co-operation and support of the Congress. The two leaders held a prolonged meeting at Siddharamaiah’s residence here on Friday night to discuss the fallout of the LS poll result.

The assurance has come at a time when Siddharamaiah is reportedly at loggerheads with CM Kumaraswamy over many administrative issues. The CLP leader is also said to have told the CM to concentrate on administration without bothering about the political developments. But the LS poll results which saw the debacle of coalition partners, has forced the coalition partners to shun all their differences and contradictions, to stop the BJP from coming to power in  the State.

Meanwhile, a meeting of Congress Legislators has been convened at Hotel Lalit Ashok in Bengaluru on Wednesday for introspection on the party’s defeat and ensuring stability of the Coalition Government.

The meeting is aimed at demonstrating the unity among Congress MLAs to counter the alleged efforts by the BJP to topple the Coalition Government.

CLP leader Siddharamaiah will chair the Legislature Party meeting and all MLAs and MLCs of the party are expected to attend. The meet would discuss various issues that caused the party’s defeat in the recently concluded general elections.

The CLP meet has also assumed significance in the wake of a section of disgruntled MLAs threatening to quit the party in support of the formation of a BJP Government in the State.