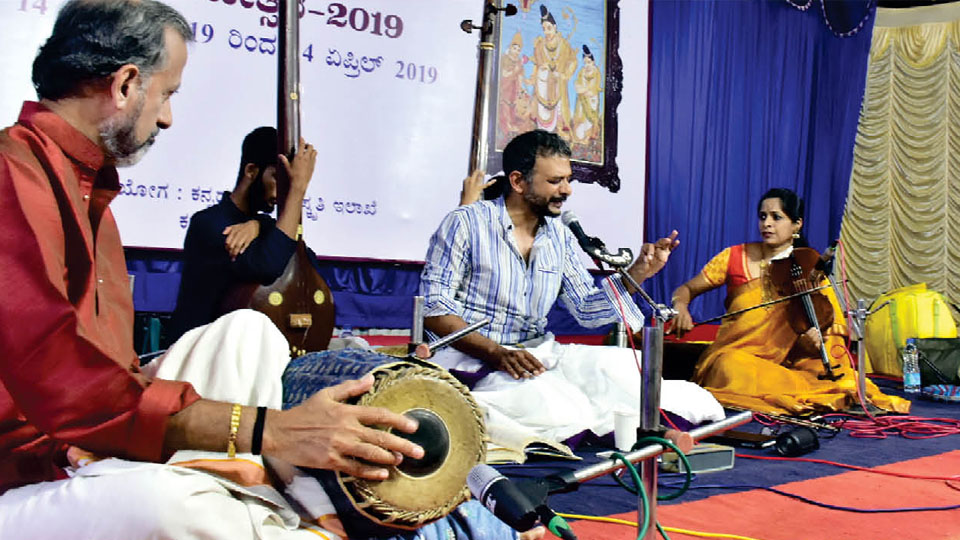 T.M. Krishna sang on the tenth day of Ramabhyudaya Sabha’s Ramotsava at Alamma’s Choultry. He was accompanied by Akkarai Subhalakshmi on violin, K.V. Prasad on mridanga and Vazhappally Krishnakumar on ghata.

As a vocalist, T.M. Krishna has courted controversy by making a large number of innovations in the style and substance of his concerts. But, however, much to the satisfaction of the conventionalists present, the present concert did not deviate much from tradition except that he combined two compositions of Tyagaraja in the beginning of the concert.

The first was ‘Badalika Dheera’ in Reetigowla in Vilamba Adi which was rendered in royal speed that suited the lyrics of the composition, focusing a neraval at ‘Sarvabhowma Saketa Rama’ and  swaras which took a lively turn with ragamalika for Kambhoji gliding onto ‘Ma Janaki,’ a madhyamakala composition, rendered energetically with all the expected sangatis in the pallavi and anupallavi sections. Swaras to this composition brought back Reetigowla winding up with the composition sung before.

Krishna always creates an attentive atmosphere in the listeners. His soft voice initiates the listener to listen to him with utmost attention. The Alapana in Todi was different with only the low notes, all in mandra sthayi. The base notes were treated with royalty merging into Shyama Shastri’s solid Swarajati ‘Rave Himagiri Kumari.’ Keeping with the speed of the composition, neraval was knitted carefully only in the first speed at ‘Kalyani Kanchi Kamakshi.’ Swaras only in the low notes were weaved for ‘Kumari’ in the pallavi section.

A simple composition ‘Broohi Mukundeti Rasane’ was also given a dignified treat as the vocalist enjoys each syllable in the composition to the extent that he forgets himself and is lost in it.

The violinist played Kapi ragalapana as per direction of the vocalist. Subhalakshmi did justice to the raga by bringing out delicate sangatis of Raga-Bhava matching that of the vocalist.

In the composition ‘Nee mettume un nanjil neekkiraan,’ Krishna reached the top shadja in the Tara Sthayi, drawing huge applause from the audience. Music legend Balamurali Krishna’s familiar composition ‘Omkaaraakaarini’ is in a rare raga Lavangi created by the composer himself. Breaking the tradition, Balamurali Krishna has composed this raga with only four swaras. On request, Krishna sang this energetically and created swaras to the unusual ‘Hoomkaara,’ which is in the high madhyama note. 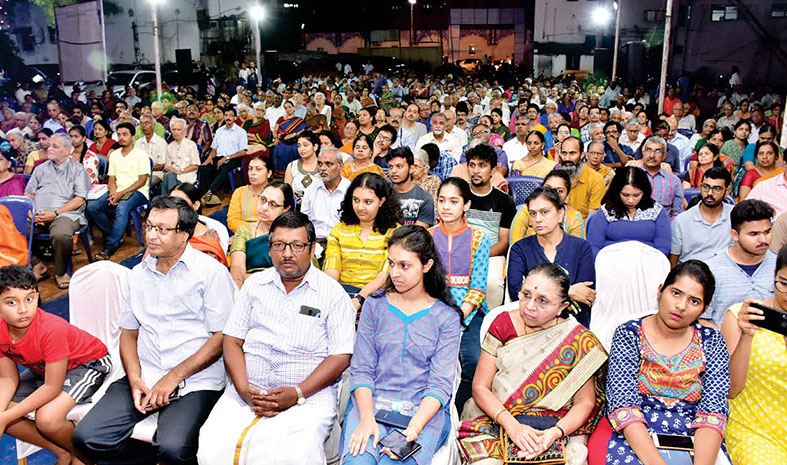 ‘Ninnu Sevinchina Krishna’ in Yadukula Kambhoji set to Mishra Chapu is a pleasing composition like the other compositions of Subbaraya Shastri. Here again, neraval was treated at ‘Sarasijaksha,’ after which it was tani time. Senior mridangist K.V. Prasad and Krishnakumar were vibrant and pleased the audience.

A ragamalika shloka in Tamil ‘Tayum illai Tandeyum illai, beginning with Kharaharapriya and then switching to Sindhubhairavi and Desh brought the devaranama ‘Vitthala Salaho Swami’ for which lively swaras were also developed for pallavi.

The concert was marked for neravals and presentation of kritis with Raga-Bhava and left a lingering memory in the listeners.