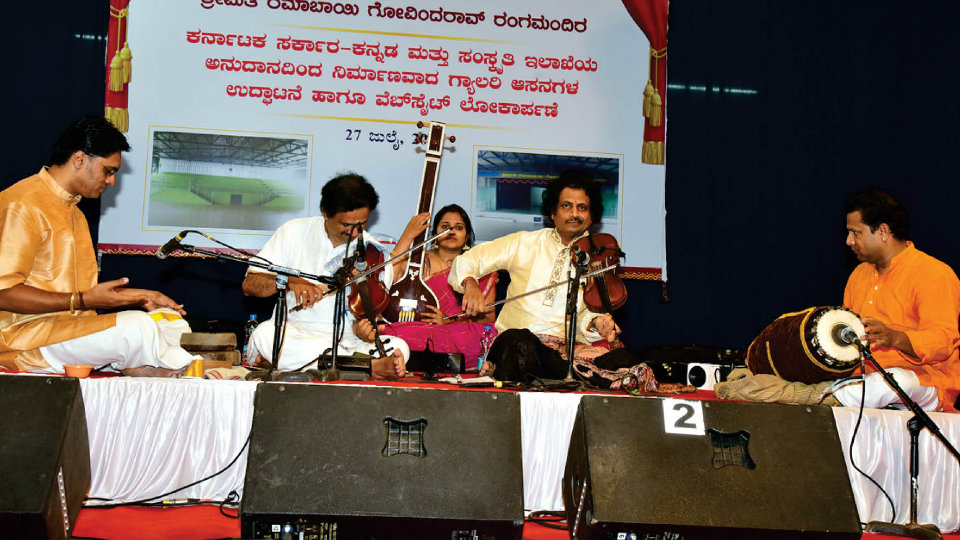 Ganabharathi of Mysuru had all the reasons to rejoice. It was adding two more feathers to its cap. The Open Air Theatre was upgraded with a Gallery and a website of Ganabharathi was launched on the 27th of July.  Cultural programmes marked the two-day celebrations.

MLA S.A. Ramdas launched the website and former minister B.K. Chandrasekhar opened the Gallery. Thanks to the Department of Kannada and Culture for releasing the grant required. Vid. Mysore M. Nagaraj and Mysore M. Manjunath, the famous brothers, gave a short and scintillating violin duet on July 27 and Vidu. Bhramari Shivaprakash and Vid. Krishna Pavankumar of Mangaluru gave a special Dance and music programme on July 28. Nagaraj and Manjunath were accompanied by Arjun kumar on mridanga and N. Amruth on kanjira.

The concert began with a mellifluous alapana of Raga Chandrajyothi by Nagaraj. The rich sound of violin carried the essence of the raga with flawless bowing. The perfect enlightened intelligence of the brothers result in absolute harmony. Tyagaraja’s ‘Baagayanayya’ lead to a short sketch of Shuddha dhanyasi by Manjunath. Muthiah Bhagavatar’s ‘Himagiri tanaye’ was seasoned with attractive kalpana swaras. Manjunath seemed to be in a mood to hit straight notes. His elaboration of Shanmukhapriya was very unusual with minimal ornamented notes. The pure notes created an entirely different aura. Nagaraj, who continued the alapa satisfied the listeners who prefer a traditional classicism. But the musical experience both fetched was very impressive.

The duo presented a rather rarely heard composition of Muthuswami Dikshitar ‘Mahasuram Kethumaham’ in all its glory. They exceptionally complement each other. The graceful mutual uphold is evident. The swaraprasthara flowed in impressive clusters and the crescendo, along with the percussion instruments, invited big applause from the rasikas. Vyasaraja’s popular ‘Krishna Nee begane baro’ brought the curtains down on the first day celebration. 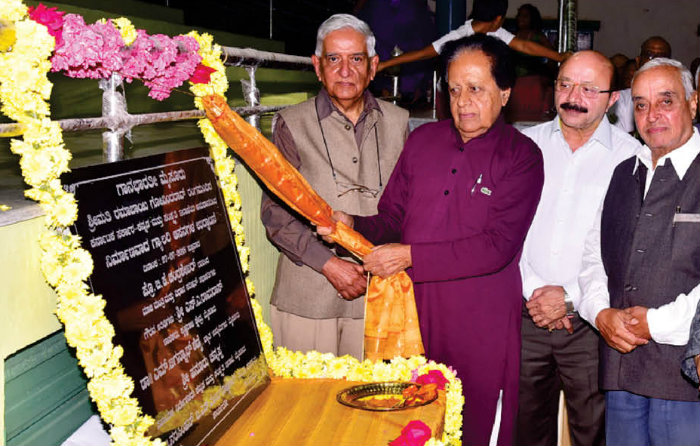 Former Minister B.K. Chandrashekar unveiling a plaque at the Gallery.

Vidu. Bhramari Shivaprakash of Mangaluru has carved a niche for herself as a committed Bharatanatyam dancer. Her deep interest in the art has resulted in many thematic presentations with a serious approach. This presentation too was based on the similarities of rational thoughts between Purandara Dasa and Tyagaraja — the two great poets and composers of Bhakthi tradition. It was depicted through both music and dance. First half of the programme was a vocal presentation by young Vid. Krishna Pavankumar, accompanied by Keshava on violin and K.H. Ravikumar on mridanga. 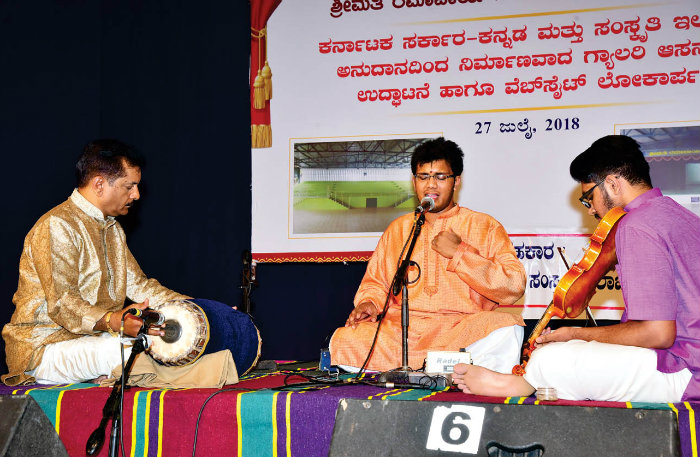 Picture shows Vid. Krishna Pavankumar presenting vocal recital on July 28. He is accompanied by K.H. Ravikumar on mridanga and Keshava on violin. 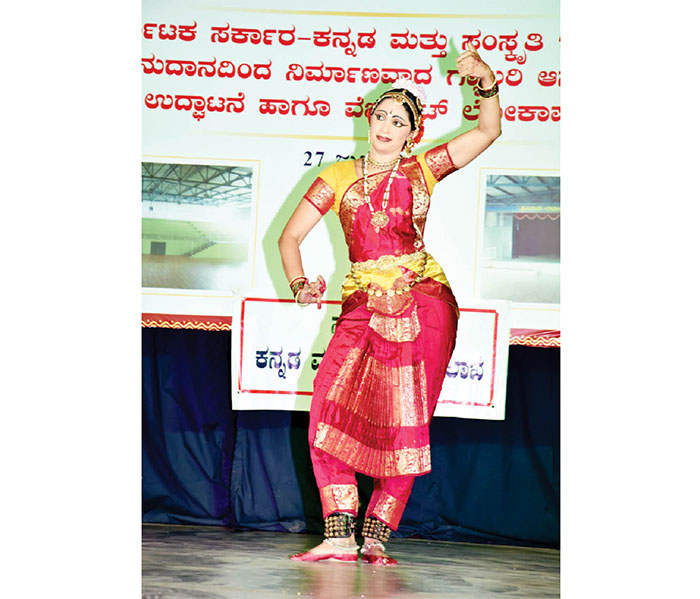 Bhramari was accompanied by Vidu. Sheela Diwakar (vocal), Sannidhi (natuvanga), K.H. Ravikumar (mridanga) and C.N. Tyagaraju (flute). In the opening Melaprapthi, she included a Ugabhoga ‘Shri Rama endare’ and an appropriate line from Tyagaraja’s ‘Prahlada bhaktha vijaya’ which mentions Purandara Dasa. Blessed with a perfect and flexible body, she conveys the emotions with a matured abhinaya. ‘Eemenu galiginanduku Seetharama’ in Varali elaborated the meaning with the sanchari of the damsel who turns to be a crocodile by the curse of an ascetic and is liberated when Hanuman takes a dip in the same river when he comes to Lanka during its dahana. Bhramari’s talent was upheld in the Padavarna and the Pancharathna Kruthi. Pada varna highlighted the ‘Sathi-pathi’ bhava of the devotee and the Lord. Putra kaameshti yaaga, Ahalya’s liberation, making of ‘Rama sethu’ and the war between Rama and Ravana were successfully shown in the sancharis of ‘Jagadaanandakaaraka.’

A rare Shobhane of Tyagaraja ‘Vadanadyuthihitha soma’ was also included with an equivalent of Kannada ‘Bhoodeviyarasa Venkataraayage shobhane’. Her committed performance was backed by crisp foot work and matured abhinaya.