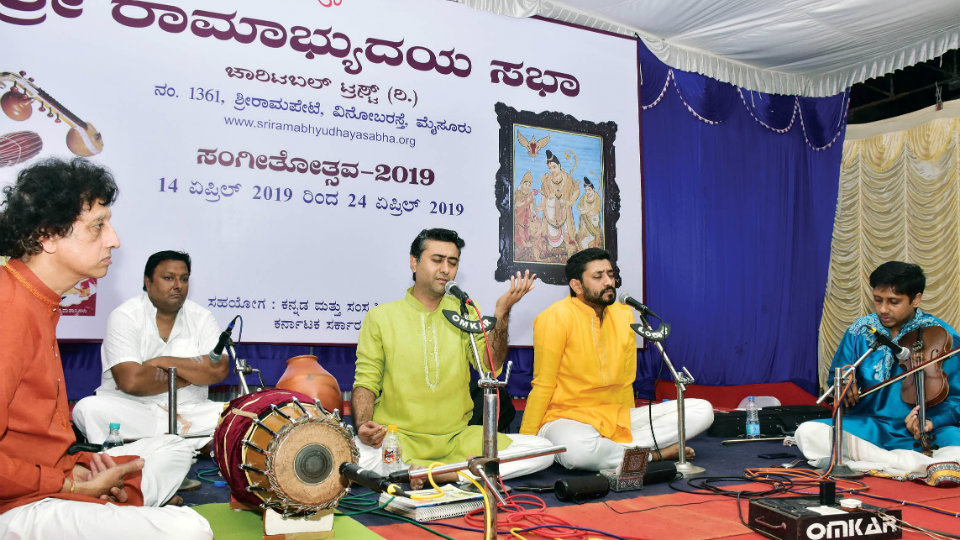 Trichur Brothers have been prominent in the past few years as vocalists with strong expressive voices, unique delivery style and pleasing manodharma. Training under the stalwart P.S. Narayana Swamy  and their own father Trichur Mohan who accompanies his sons regularly has seasoned their music. All the compositions they presented on the occasion were on Lord Rama.

The brothers opened their concert with the Atta Tala varna in Kambhoji on Rama which set pace for the concert. ‘Namami Vighna Vinayaka’ in Hamsadhwani, a rare composition of Krishna Swamy Ayya  originally in Roopaka tala was set to lively Trishra Adi which also saw impressive swaras for the pallavi portion. While developing swaras, the brothers complement each other with a complementing (samvadi) swara at the base which is very impressive and has a special impact. A short sketch of Reetigowla led to ‘Paripalaya maam padmanabha murare’, which was a soulful presentation.

Bhupala, chosen for the evening as a sub-main raga had a charismatic appeal. The expected composition ‘Sada Chaleshwaram’ by Deekshitar maintained the integrity of the pathantara. Purandara Dasa’s ‘Narayana Ninna Namada Smaraneya’ in Shuddha Dhanyasi followed by a quick ‘Neranunchi Nanu’ by Tyagaraja (Malavi) led to the main raga of the evening —  Keeravani.

Normally when brothers or sisters perform together, one of them has an upper hand. But here both are equally competent. Also in ragalapana, the usual practice is that one of them performs a full raga or it is split into half where the first part is developed by one and the other by the latter. But these brothers exchange phrases long and short with each landing swara  taken up by both for delineation, equally distributing in the exploration both in the ragalapana and the Tanam. Therefore, Keeravani emerged satisfactorily. The tana was performed in ragamalika in Kamavardhini and Revati and Neelambari while the violinist chose to play Hindola. The pallavi was simple and their own, the lyrics of which were ‘Parama Bhagavata Madhura smita bhashini… Anjanasuta mahaveera’ set to Adi Tala. After trikalam and neraval, Kalpana swaras were developed in ragamalika  in Maand, Kapi, Mohana and Sindhubhairavi, making it more colourful. Father Trichur Mohan offered a rich taniyavartanam with Kovai Suresh, which drew big applause from the audience.

Bhajan in Yamankalyani with the repetition of Panduranga in the end filled the atmosphere with devotion.

Ramotsava
Coercing children to score high marks could drive them to depression: Mime Ramesh
Training in Manipuri Pottery, Dry Leaves Art at IGRMS from May 8 to 15