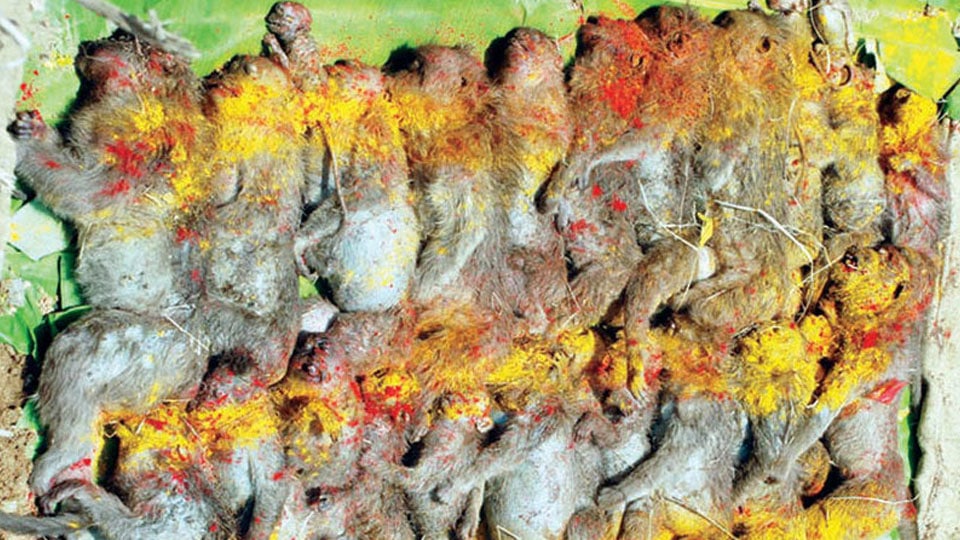 Pandavapura – Carcasses of as many as 30 monkeys suspected to have been poisoned to death by miscreants were found on the outskirts of Kerethonnuru in Pandavapura yesterday. Villagers noticed the carcasses at a desolate place near Kanive Borappa Temple.

The dead monkeys were tied up in gunny bags and dumped. Local people suspect that the monkeys might have been killed by mixing poison/pesticide with food somewhere else, probably in neighbouring districts. The incident came to light yesterday after some locals noticed the bags and opened them.

Villagers suspected that the monkeys could have been killed by monkey catchers hired by owners of horticultural gardens or farmhouses as it is a common practice for farmers to hire such monkey catchers to protect standing crops.

Forest personnel who visited the spot suspected that the monkeys have been poisoned as there were no external injuries on them. They apprised their senior officers of the incident and directed the villagers to perform the last rites of the animals.

Residents of Kerethonnuru and Thirumalapura pooled in money and conducted the last rites as per the Hindu tradition.