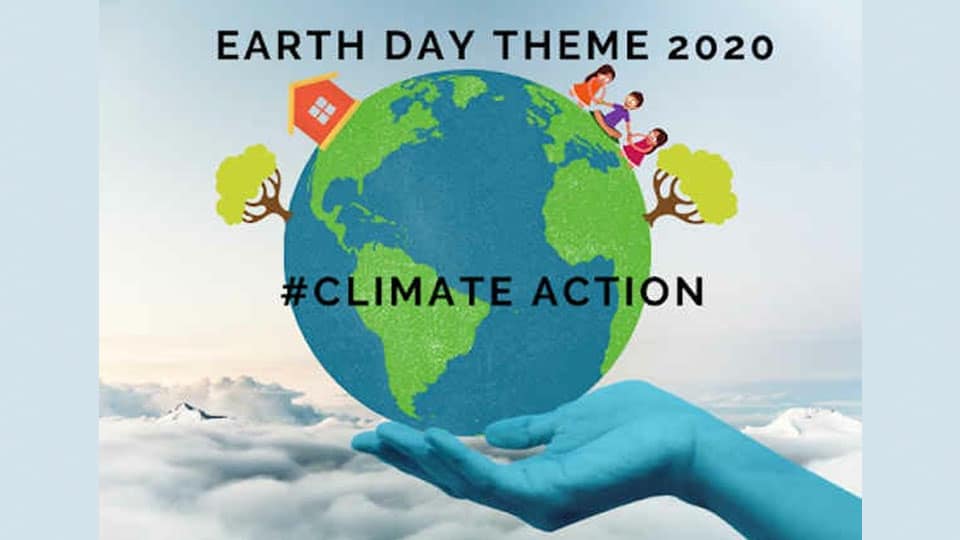 Earth is the third planet from the Sun. It is the largest of the terrestrial planets in the Solar System in diameter, mass and density. It is also referred to as the World and Terra. The planet formed 4.54 billion years ago, and life appeared on its surface within a billion years. Since then, Earth’s biosphere has significantly altered the atmosphere and other abiotic conditions on the planet, enabling the proliferation of aerobic organisms as well as the formation of the ozone layer which, together with Earth’s magnetic field, blocks harmful radiation, permitting life on land. The world is expected to continue supporting life for another 1.5 billion years, after which the rising luminosity of the Sun will eliminate the biosphere.

All may be wondering why a strong introduction about earth? The reason is obvious. On April 22, it is World Earth Day. This year, it is the 50th anniversary of World Earth Day with the theme “Climate Action.”

Earth Day is celebrated on April 22 every year, both held annually during spring in the Northern Hemisphere, and autumn in the Southern Hemisphere. These are intended to inspire awareness and appreciation for the Earth’s environment. The United Nations celebrates Earth Day each year on the March equinox, a tradition which was founded by peace activist John McConnell (1915 – 2012) in 1969. In September 1969 at a conference in Seattle, Washington, US Senator Gaylord Anton Nelson (1916 – 2005) of Wisconsin announced that in spring 1970 there would be a nationwide grassroots demonstration on the environment. This occurred during a time of great concern about overpopulation and when there was a strong movement towards “Zero Population Growth.”

Earth Day draws on astronomical phenomena in a new way – which is also the most ancient way – using the vernal Equinox, the time when the Sun crosses the equator making night and day of equal length in all parts of the Earth. To this point in the annual calendar, Earth Day attaches no local or divisive set of symbols, no statement of the truth or superiority of one way of life over another. But the selection of the March Equinox makes planetary observance of a shared event possible, and a flag which shows the Earth as seen from space appropriate.

But, the equinoctial Earth Day is celebrated on the March Equinox (around 20 March) to mark the precise moment of astronomical mid-spring in the Northern Hemisphere, and of astronomical mid-autumn in the Southern Hemisphere. An Equinox in astronomy is that moment in time (not a whole day) when the centre of the Sun can be observed to be directly above the Earth’s equator, occurring around March 20 and September 23 each year. In most cultures the equinoxes and solstices are considered to start or separate the seasons.

It is now very important to protect our planet from unnecessary pollution and other sources of harmful acts as the earth is facing pollution threat day by day. Earth Day is considered as the awakening of considerable senses for the protection and further development of go-green attitude. Therefore, concerted steps should be taken for further protection and longevity of the earth. Earth Day-2020 is the 50th Anniversary and it is high time to include activities like Great Global Clean-Up, Citizen Science, Volunteering, Advocacy, Education and Art.

READ ALSO  A thought-provoking painting expo on earth and nature

The mammoth challenges of acting on climate change have distinguished the issue as the most persuasive theme for the 50th anniversary. Climate change represents the biggest challenge to the future of humanity and the life-support systems that make our world habitable. At the end of 2020, nations will be expected to increase their national commitments to the 2015 Paris Agreement on climate change. The time is now for citizens to call for greater global ambition to tackle our climate crisis. Unless every country in the world steps up – and steps up with urgency and ambition — we are consigning current and future generations to a precarious future.

Earth Day-2020 will be far more than a day. It must be a historic moment when citizens of the world rise up in a united call for the creativity, innovation, ambition, and bravery that we need to meet our climate crisis and seize the enormous opportunities of a zero-carbon future.

Earth Day on April 22 is about working together to safeguard our planet. The campaign calls for people, organisations and Corporations to commit to an act that helps reduce carbon emissions and promotes sustainability. So far, over 80 million actions have been pledged. Some of the actions pledged are bike to school; take public transport; walk and cycle as much as possible; car-pool; eat more local food; become a vegetarian; wash clothes in cold water; take shorter showers; stop buying bottled water; switch to LED lights; turn off PCs and lights when not in use; stop buying individually packed snacks; run ceiling fan instead of the air-conditioner; take the stairs instead of the elevator. World Earth Day-2020 enlists commitments small and large from individuals to Governments and Corporations to quantify their acts of green through an easy-to-use online registration tool at the Earth Day Network.