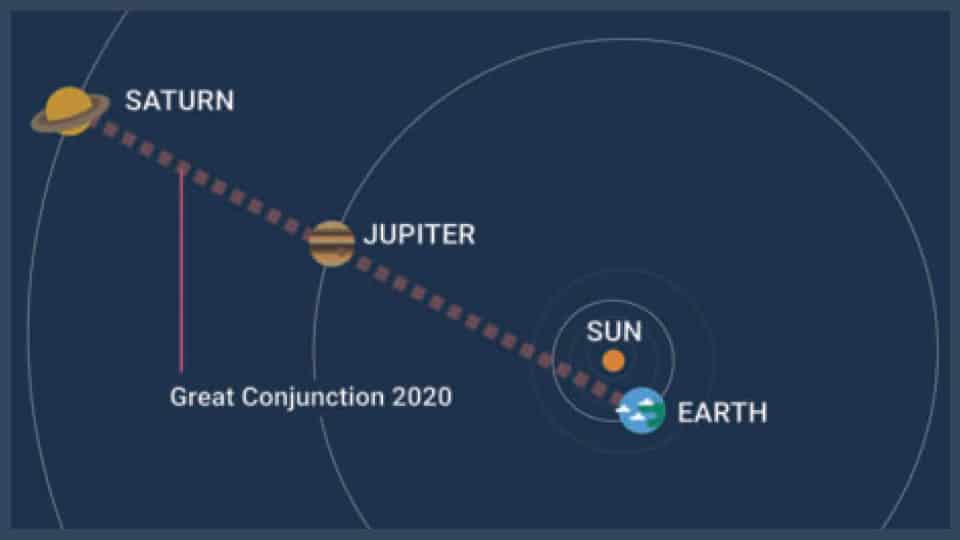 Tonight will be definitely memorable and remarkable for observational and amateur astronomers! In the history of Astronomy, today cannot be forgotten by any individual. Jupiter and Saturn will be exceptionally close in the recorded history and is referred to as ‘Great Conjunction – 2020’.

Astronomy connoisseurs are in for an end-of-year extravagance. What has become known prevalently as the “Christmas Star”, in reference to the Star of Bethlehem, is an exclusively vivacious planetary conjunction easily observable in the evening sky over the next two weeks as the bright planets Jupiter and Saturn come together, culminating on the night of Dec. 21.

A planetary conjunction transpires when planets appear unbelievably close to one another in the sky because they line up with Earth in their respective orbits. While the two planets may be watched as single point of light, they will remain hundreds of millions of miles apart in space, according to the experts of NASA. A conjunction of Jupiter and Saturn is comparatively sporadic and it happens about once every 20 years. For this reason, it is known as the great conjunction. The most celebrated planets, Jupiter and Saturn will be closest to each other in the sky on Dec. 21, tonight appearing only a tenth of a degree apart. They will remain in close alignment for a few days and will be effortlessly perceptible to the naked eye when looking towards the southwest just after sunset.  Great Conjunction of this year marks the first time in nearly 800 years since the planets aligned at night and astronomy enthusiasts were able to witness this celestial-spectacle.

The planetary orbits of Saturn and Jupiter bring these planets into alignment once every 20 years or so, this year marks the first time since 1623 that the two gas giants have passed this close to one another. The Conjunction on July 16, 1623 was not noticeable to sky-watchers on much of the Earth because of its location in the night sky, so the last time the event was discernible was on March 5, 1226. The date of the planetary conjunction is determined by the stipulated positions of the gas giants — Jupiter, Saturn and the Earth — in their trajectory around the Sun, while the date of the solstice is determined by the tilt of Earth’s axis.

Jupiter is the 2nd brightest planet after Venus. A few weeks before and after the Opposition on July 2020, Jupiter was extraordinarily bright, reaching a visual magnitude of about -2.5 to – 2.6. This was an excellent opportunity to perceive Jupiter, its Great Red Spot and Jupiter’s four largest satellites namely Io, Europa, Ganymede and Callisto. Jupiter stood opposite Sun in our sky, so it rises in the east at sunset and sets in the west at sunrise. Jupiter not only beams at its brilliant best for the year, but stays out all night long! From Mysuru, Jupiter will be perceptible between 7 pm to 6 am.

Analogously, on July 20, Saturn had rendezvous with Earth and was the right time to witness this gorgeous ringed planet.  ‘Saturn’ is the sixth planet from the Sun and the outermost planet perfectly noticeable with the unaided eye. Saturn’s rings are well-known and were explored in great detail by the Voyager and Cassini missions. Saturn’s rings has unmitigated, disc-like, effortlessly conspicuous with even a small telescope, which envelops Saturn. Saturn reached “Opposition” on July 20, 2020 and so it had its best distinguishability.

The specialty of this astronomical happening is that, the planet Saturn becomes more beautiful, also the best time to witness the planet. On that day, the planet was closer to earth. Throughout the night, Saturn shall be discernible and more resplendent. From Mysuru, Saturn will be perceptible between 19:30 to 06:00 or evening 7:30 pm to morning 6:00 am. It reached the highest point or pinnacle in the sky at around midnight local time. Saturn can be seen in the vicinity of the constellations ‘Capricornus’ and ‘Sagittarius’. Saturn appears cream-white in colour and is among the brightest star-like objects in our sky this winter. Jupiter and Saturn have planned to dominate this year captivatingly! In 1610, an Italian astronomer Galileo Galilei (1564 – 1642) pointed with his telescope to the night sky, discovering the four moons of Jupiter — Io, Europa, Ganymede, and Callisto. In the same year, Galileo also discovered a bizarre ovoid encompassing Saturn, which later observations determined to be its gorgeous rings. In 1623, the solar system’s two giant planets, Jupiter and Saturn, travelled together across the sky. Jupiter trapped up to and passed Saturn, in an astronomical event known as a “Great Conjunction.”

It has been approximately 400 years since the planets, Jupiter and Saturn have passed in closer proximity to each other in the sky, and almost 800 years since the configuration of Saturn and Jupiter eventuated at night, as it will for 2020, allowing nearly everyone around the globe to observe this “Great Conjunction.” Astronomers use the term ‘conjunction’ to designate the rendezvous of planets and other celestial objects on our sky’s dome. They use the term great conjunction to define the meeting of Jupiter and Saturn, which are the two biggest planets in our solar system. Though the two planets will seem stunningly close together on the sky’s dome now, Jupiter and Saturn will actually be 456 million miles (734,000 km) apart. Saturn is nearly twice as far away as Jupiter. Saturn takes nearly 30 years to go around the Sun, while Jupiter takes nearly 12 years. Thus, every 20 years, Jupiter catches up to Saturn as viewed from Earth. Find a spot with an unhindered vision of the sky, such as a field or park. Jupiter and Saturn are bright, so they can be conspicuous even from most cities. An hour after sunset, look to the southwestern sky. Jupiter will look like a bright star and be easily detectable. Saturn will be slightly fainter and will appear indistinctly above and to the left of Jupiter until Dec. 21, when Jupiter will surpass it and they will reverse positions in the sky. These planets can be seen with the unaided eye, but if you have binoculars or a small telescope, you may be able to see Jupiter’s four large moons orbiting the giant planet. Each night, the 2 planets will appear closer low in the southwest in the hour after sunset.

On Dec. 21, the pair, Jupiter and Saturn, will be only 0.1 degree apart and the planetary conjunction of Jupiter-Saturn cannot be matched again until Mar. 15, 2080.Conjunction of Jupiter-Saturn with minimum separation of 0.2 degrees can be seen only in 2080, 2417 and 2477. This similar type of conjunction with separation of 0.1 degrees will be noticeable on 7531 AD and before 1226 AD, it was visible on 6856 BC. So, do not forget to see to this rare astronomical feast tonight after 7 pm in southwest direction!