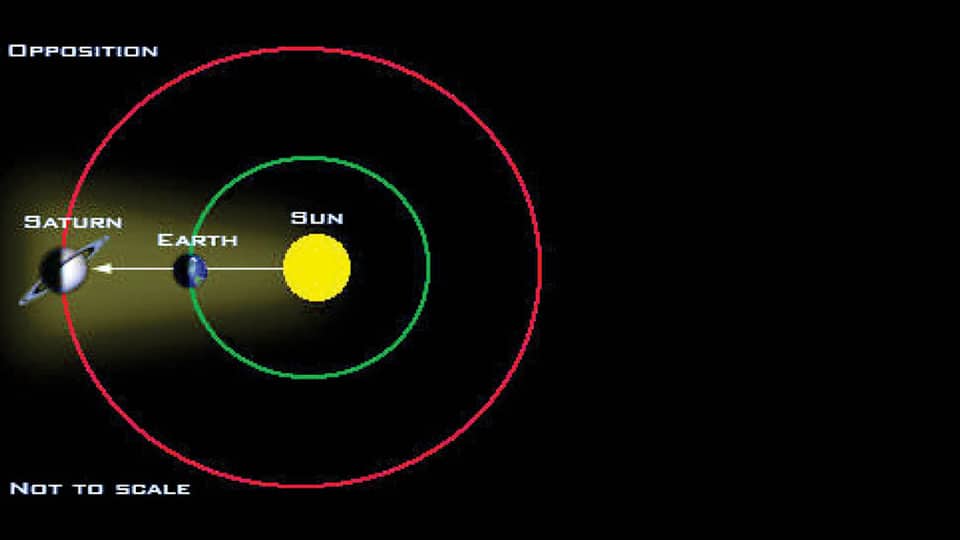 Saturn is the sixth planet from the Sun and the outermost planet perfectly noticeable with the unaided eye. The imperative physical distinctiveness like magnitude, composition, internal configuration and atmosphere advocate an overall similitude to Saturn.

Saturn’s rings are well-known and were explored in great detail by the Voyager and Cassini missions. Saturn’s rings has unmitigated, disc-like, effortlessly conspicuous with even a small telescope, which envelops Saturn.

Saturn reaches ‘opposition’  on July 9, 2019 and so it has its best visibility this month.

The specialty of this astronomical happening is that, the planet Saturn becomes more beautiful, also the best time to witness the planet. On that day, the planet will be closer to earth.

Throughout the night, Saturn is discernible and more resplendent. Presently, Saturn is perceptible in the south-eastern direction at 9 pm clearly in between the constellations ‘Sagittarius’ and ‘Capricornus.’ On July 9, the distance between Saturn and Earth will be 1352 million kilometres.

‘Opposition’ is the astronomical occurrence when a planet farther from the Sun than Earth appears opposite the Sun in the sky.

Rightfully, this is the best time to observe a planet. A planet is at ‘opposition’ when it is directly opposite the Sun from our viewpoint on Earth. This implies, Sun-Earth-planet is in a straight line. This is when the planet is about as close as it can get to Earth, so it is biggest and brightest.

An object is at ‘opposition’ when the Sun is on one side of the Earth and the object is directly on the opposite side.

The result is that the object is fully illuminated by the sun and appears disk-like. Whenever there is a full moon, the moon is on one side of the Earth and the Sun is on the opposite side.

‘Opposition’ is when a planet appears on the opposite side of the sky from the Sun. As Saturn takes 29 years to make a single circuit of the Sun, this happens once a year, it actually takes a year and a few extra days because Saturn moves against the background sky a bit — the last ‘opposition’ was on June 27, 2018 and June 15, 2017.

READ ALSO  Once in a Blue Moon

Saturn and Jupiter happen to be the planets clearly perceptible in the sky for most of the night. Through a telescope, Saturn’s moon Titan is visible just to the south of the planet itself in most telescopes that will be towards the top of the image. The rings are also at their brightest, as the planet is tilted in such a way that Saturn is facing the Earth and we see it from an angle north of the planet’s equator.

Earth and Saturn orbit the Sun at different angles. That gives us slowly but dramatically changing perspectives on the planet. Sometimes, we are looking at Saturn edge-on and the rings practically disappear. That will happen in 2025. Other times, Saturn is tilted towards us so much; we get a somewhat broad view of the rings. The next time we’ll get a broad view of the rings will be in 2020 and 2021. One pole of the planet will be hidden from the rings. There are 62 natural satellites orbiting Saturn.

The largest is Titan and it’s the second largest moon in the solar system. Titan’s bigger than Mercury. It has an atmosphere that’s 95% nitrogen. Saturn appears to have a muddy terrain with sand dunes. The sand could actually be water ice crystals. Winds on Titan are caused by Saturn’s gravity tugging on the moon’s atmosphere. Titan’s the moon you’re most able to see in a telescope.

A superior planet revolves around the Sun in an orbit further away from the Sun than the Earth. Mars, Jupiter, Saturn, Uranus Neptune, and Pluto are superior planets in the Solar System.

READ ALSO  Close encounter of Jupiter and Saturn with Earth

All the planets farther from the Sun reach ‘opposition’ every time our swifter-moving planet sweeps between the Sun and them.

Saturn, the sixth planet outward from the Sun, is the most distant world that’s easily visible to the unaided eye. So that’s Saturn at ‘opposition’ tonight. Shining in the east at nightfall, near the bright star Spica, Saturn looks like a respectably bright steady star.

Saturn and Spica climb upward throughout the night and ascend to their highest point around midnight. When it’s high in the sky, where Earth’s turbulent atmosphere thins out and settles down, Saturn is a treat for telescope users, who can view the planet’s glorious rings.

Saturn appears cream-white in colour and is among the brightest star-like objects in our sky this winter. Saturn in 2019 rises earlier and continues to creep higher above the southeastern horizon earlier each night.

Saturn was visible in the east by 11 pm in early May and June by 10 pm. On July 9, Saturn will have very close encounter with Earth and is the best time for observing Saturn. Jupiter and Saturn have planned to dominate this year captivatingly!

In July, one can witness the planets ‘Mars’ and ‘Mercury’ in the western direction after sunset clearly. Even in the spring months, Saturn does not shrink in apparent size greatly so its rings will still be readily seen through July, August and September.  Do not forget to see Saturn this month. With the help of telescope and astral binoculars, none can rival the glory of Saturn.