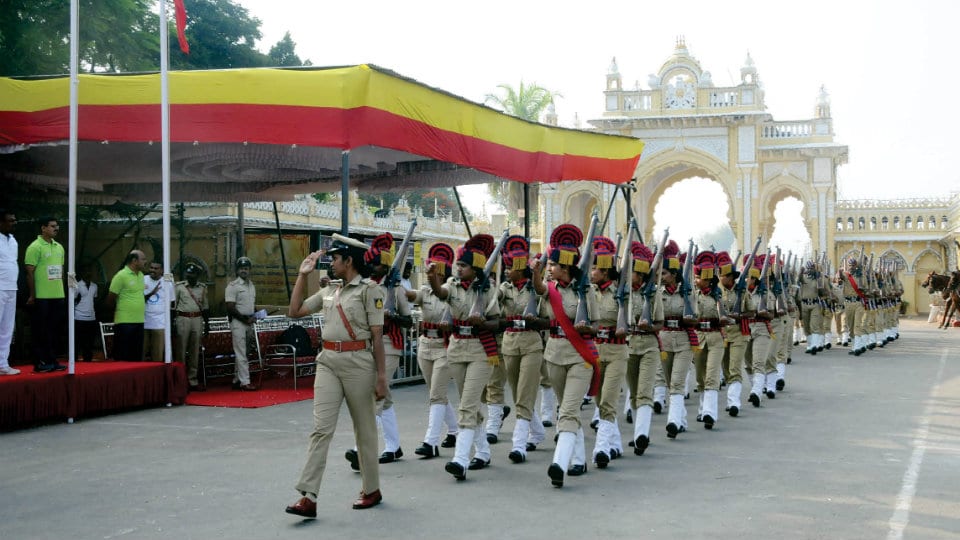 Mysuru: The March-Past rehearsal organised by the Police Department as part of 63rd Kannada Rajyotsava celebrations was held near  Kote Anjaneyaswamy Temple in front of the North Gate of Mysore Palace this morning.

Deputy Commissioner of Police (Law and Order) Dr. Vikram.V. Amathe donned the role of the chief guest and received the Guard of Honour from the Police troops.

Earlier,he hoisted the  National Flag and the Kannada Flag.

Higher Education and District Minister G.T Devegowda will hoist the tricolour and Kannada Flag at 63rd Kannada Rajyotsava celebrations organised by the District Administration on November 1st at 9 am near Kote Anjaneyaswamy Temple in front of the North Gate of Mysore Palace in city. 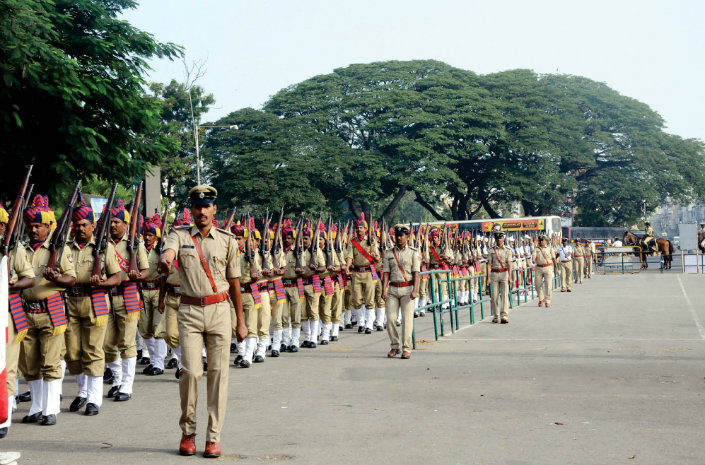 Meanwhile, the District Administration has made all preparations for the success of various events organised as part of Kannada Rajyotsava. District Minister will perform puja at Sri Bhuvaneshwari Temple in the Palace premises at 8.30 am.

A huge procession carrying the portrait of Goddess Bhuvaneshwari will be taken out from Kote Anjaneyaswamy Temple. The procession will pass through K.R. Circle, Sayyaji Rao Road, Irwin Road, and Ashoka Road.

Department of State Road Transport, BEML, various Sthree Shakti and Kannada organisations will display their tableaux to showcase their contributions for promotion of Kannada.  Apart from this, various folk troupes, Police Band, Mounted Police, School and College students will participate.

The District Administration has sought all district- level officials to attend the event compulsorily. The DC has directed the District Social Welfare and Other Backward Classes Development Officers to set up special counter to collect the attendance signatures of the officials on the day.