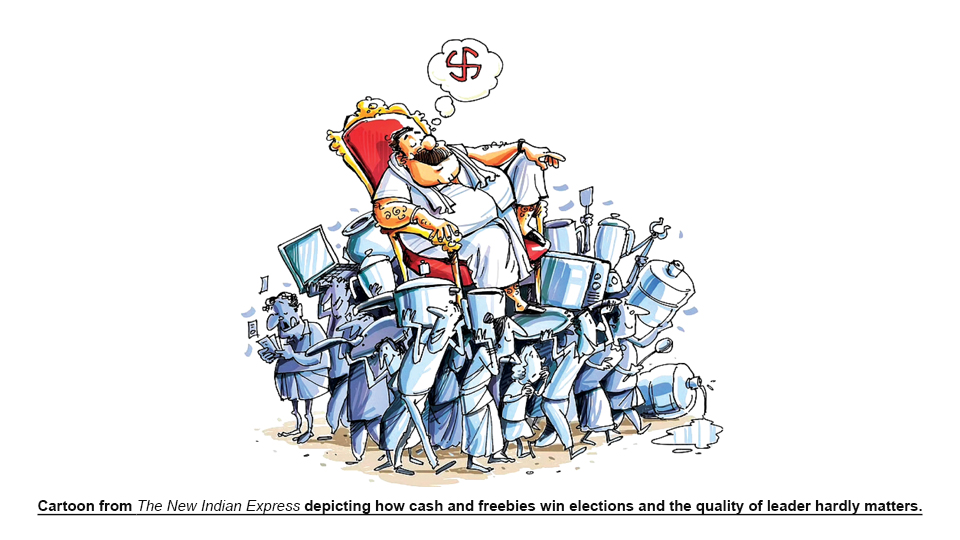 75 years on, still a Dysfunctional Democracy

It’s been 75 years since we began to rule ourselves. We must be proud because we continue to exist as a union and a democratic union at that.

It is no easy task for a nation as diverse as ours to stay together for as long as we have. But our inclination to side with money and power above all else has rendered our democracy to remain, forever dysfunctional.

There is a perception that only bureaucrats, politicians and businessmen are corrupt. But the fact is, even ordinary Indians are corrupt; this is what makes our democracy dysfunctional.

In 2012, former Chief Vigilance Commissioner Pratyush Sinha declared that 30 percent of Indians were totally corrupt, 50 percent borderline dishonest, and just about 20 percent were close to being honest.

From the very beginning, our moral fabric has been malleable. This trait has made us a people who are very ‘rule-able’. Just look at our recent history.

The British rule in India began with a victory, won by paying a bribe — The Battle of Plassey. Robert Clive, an employee of East India Company, bribed Mir Jafar, the commander-in-chief of the Bengal Nawab’s army, with money and the promise of being made the next Nawab of Bengal.

Before the British in 1701, Aurangzeb bribed the Maratha commander Trimbak to take over the forts, and he did without even fighting! Shivaji bribed a Mughal commander and took over Kondhana. Tipu Sultan lost his battle against the British because Mir Sadiq, his right-hand man, was bribed by the British.

The tragedy is that 75 years after independence, these two strategies are still being used, albeit by Indians on Indians. Bribing and dividing people is the way to victory, even in the electoral battles of 21st-century India!

This nature of Indians being bribed even at the cost of our dignity and self-respect reminded me of Thomas Macaulay’s ‘bribe’ story when he visited Ooty.

This story has been documented in a book titled ‘Reminiscences of an Indian Judge’ by Francis Lascelles, who worked as a Judge in various cities in India during British rule and also disclosed by the Nilgiri Documentation Centre in June this year.

In April 1834, ‘Lord’ Macaulay was visiting Ooty by palanquin from Madras to attend the swearing-in of Lord William Bentinck, then Governor of Calcutta, as India’s first Governor General. The ceremony was at the newly constructed Ootacamund Club, now Ooty Club. After the ceremony, Macaulay decided to extend his stay in Ooty by three months.

During this time, one of his palanquin-bearers initiated a romance and began a relationship with a local woman with the promise of marriage. After three months, it was time for Macaulay to leave Ooty.

As his travel party began heading back to Madras, they were stopped near the famous St. Stephen’s Church in Ooty by a large angry mob.

Macaulay feared that the angry mob would do anything, including resort to violence to save the honour of their local girl and their town’s pride. So, he ordered his travel party to head straight to the offices of the District Commanding Officer for protection and also to sort out the matter.

Once at the District Commanding Officer’s office, the two warring parties went into the chambers for discussion. But, as Lascelles writes, “a short while later, Macaulay and his party emerged and continued, unimpeded on their way to Madras. The excited mob, for its part, quietly disbanded, returning to the nearby hills from where they had descended to try and enforce an honourable settlement for one of their womenfolk”!

Lascelles further writes, “I accosted one (of the crowd) who appeared to be the leader and asked him what had taken place. He replied, ‘Tom Macaulay Sahib was a very good gentleman… he gave us Rs. 100’”!

After 75 years of Independence, what has changed? Nothing.

As long as there is a characterless electorate and a self-centred population, Indian democracy will forever remain dysfunctional.

In his book ‘Being Indian’, Pavan Varma rightly observed, “The concept of morality and of high-minded principle is dear to Indians as a theoretical construct, but largely ignored in real life as impractical. And those who renounce the lure of power are worshipped not because their example is worth emulating but because they are in awe of the person’s ability to transcend the irresistible.”

That is why we revere Gandhiji but refuse to emulate him. We see Gandhiji’s character traits as good only in theory, never to be practised.

Worse even today, 75 years after Independence the name of the man who mobilised us to fight for freedom is used in a mocking manner. How? We brand an idealistic person as foolish by mockingly calling him ‘Gandhi nan Maga.’ Ah! how far we have fallen and still falling.

Our patriotism is only limited to singing our anthem, humming our national song and changing our Display Picture (DP) on Independence Day. We forget that being an honest citizen is a much greater act of patriotism.

Now, as we indulge in the Har Ghar Tiranga campaign and change our display pics to Indian Tricolour, how many of us know what the colours of our flag symbolise?

Our Second President, Dr. Sarvepalli Radhakrishnan, explained: “Saffron colour denotes renunciation or disinterestedness. Our leaders must be indifferent to material gains and dedicate themselves to their work.

The white in the centre is light, the path of truth to guide our conduct.

The Ashoka Chakra in the centre is the wheel of the law of dharma. Truth and dharma ought to be the controlling principles of those who work under this flag.”

As long as we Indians continue to suffer moral degradation, then, as Nani Palkhivala said, “Our Tricolour fluttering on Independence Day will not be Orange, White and Green but Black, Red and Scarlet — Black money, Red tape and Scarlet corruption.”

13 COMMENTS ON THIS POST To “75 years on, still a Dysfunctional Democracy”