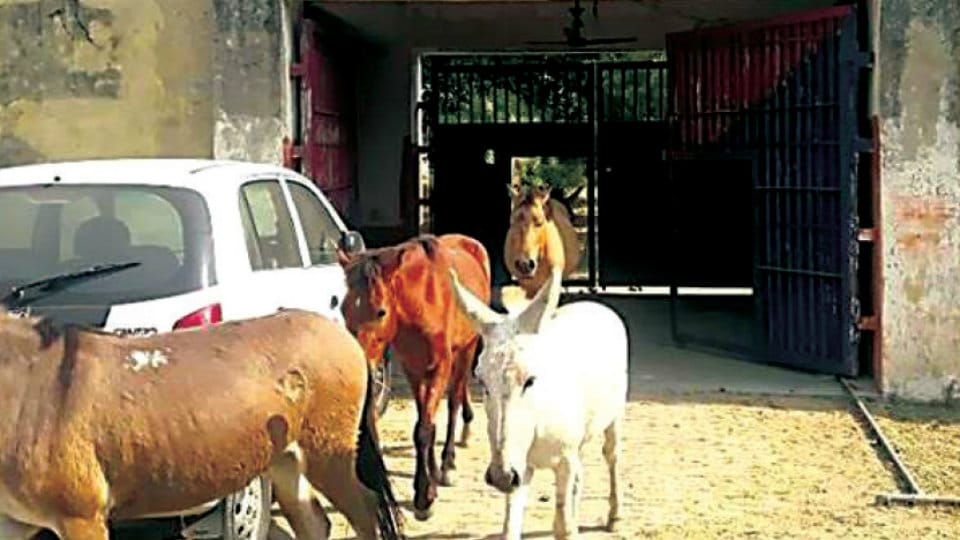 8 donkeys freed after three days in jail for destroying plants

Lucknow:  Eight donkeys walked free from Orai District Jail yesterday after serving a three-day sentence for feasting on plants and destroying flower pots placed outside the prison gates for a ‘Swachh Bharat’ project. Their deed, in which other animals were also allegedly involved, cost the jail administration a loss of ‘Rs. 50,000’.

The donkeys were handed over to their owner after the latter gave an affidavit promising they would never be seen around the prison building again, said the jail administration, adding that they locked the animals in a room inside the prison premises “to teach a lesson” to owners who leave their animals loose.

Superintendent of Orai District Jail, Sitaram Sharma, said, “We had been planning a plantation on jail campus under the Swachh Bharat Mission. We had brought some plants from Delhi and Agra. But in the last few days, goats, cows and donkeys destroyed these plants and flower pots worth over Rs.50,000. We caught these animals, traced the owners of the goats and cows and handed over the animals with instructions not to let their animals loose here.” He added, “However, we failed to trace the owner of the eight donkeys. So we locked up these animals in an old empty building inside the jail premises day before yesterday.” Yesterday morning, Kamlesh Kumar, the owner of the donkeys, arrived. Jail officials released the equines after he “requested for forgiveness” and submitted an affidavit stating he would not leave the donkeys loose in the area again.