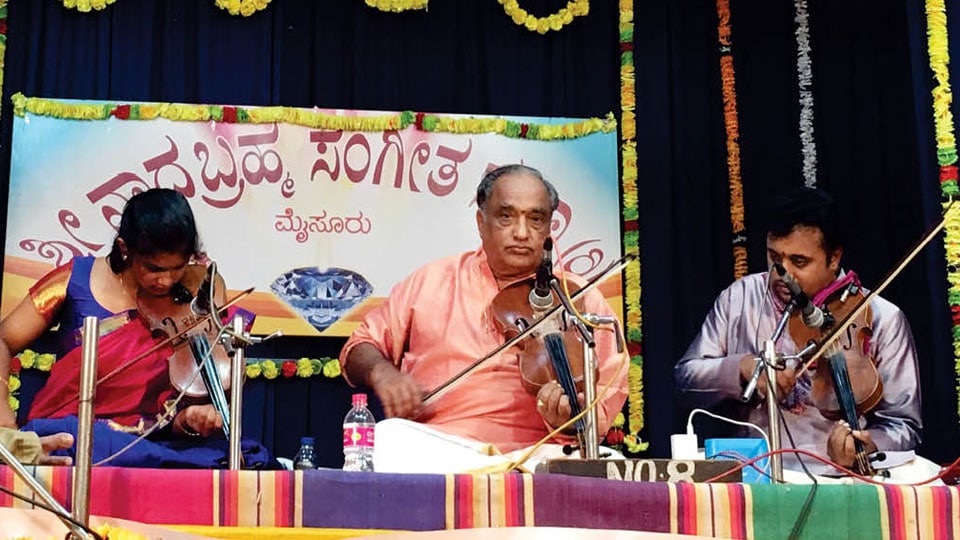 On the occasion, HKN presented a violin concert with his son H.N. Bhaskar and granddaughter Prithvi Bhaskar. The trio from the Parur School enchanted the audience with a variety of compositions.

The varna in Saranga by Tiruvottiyur Tyagayyar set the tone and spirit of the concert. The trio’s  play-style with the touch of vocalism kept the right mood of the compositions throughout the concert. Pleasant swaras were developed to Girija Ramana (Gambhira Nata, Adi tala, Mysore Vasudevachar).

Prithvi, a young promising girl, presented the raga Gowri Manohari melodiously. Nurtured by her grandparents, she has imbibed the style of her grandfather in her bowing. ‘Guruleka ituvanti’ by Tyagaraja found swaras to the last part of the charana alternately by each of the three artistes. Mysore Vasudevachar’s ‘Devi kamalambe’ in Garuda dhwani is an impressive composition with the influence of western music, the presentation of which set a lively mood in the auditorium. HKN’s mohana, though short, was full of the branded phrases characteristic of the raga. and Tyagaraja’s ‘Dayarani’ brought memories of MSG. HKN also played kanada alapana followed by ‘Mamava Sada Janani’ by Swati Tirunal. The highlight of the evening was the RTP in Hemavati. Bhaskar essayed the raga in a serene manner highlighting the richness of the raga bhava. The tana was rendered with fine appeal by the father and son. The pallavi ‘Neerajakshi kamakshi Neerada Chikure Tripure raksha maam’ set to Khanda Triputa tala projected the all round manodharma talent of the trio. Ragamalika swaras in Hindola, Kapi, Nalinakanti and in rare ragas like Ratipatipriya and Bhavani pleased the audience.

G.S. Ramanujam provided excellent support to the trio. His tani with Guruprasanna was a treat of mathematically intricate laya patterns. The concert was concluded with Swati Tirunal’s ‘Vishweshwara Darushana kar’ in Sindhubhairavi.