Home » Columns » Abracadabra By K. B. Ganapathy » A ‘Monsoon Wedding’ in Mysuru 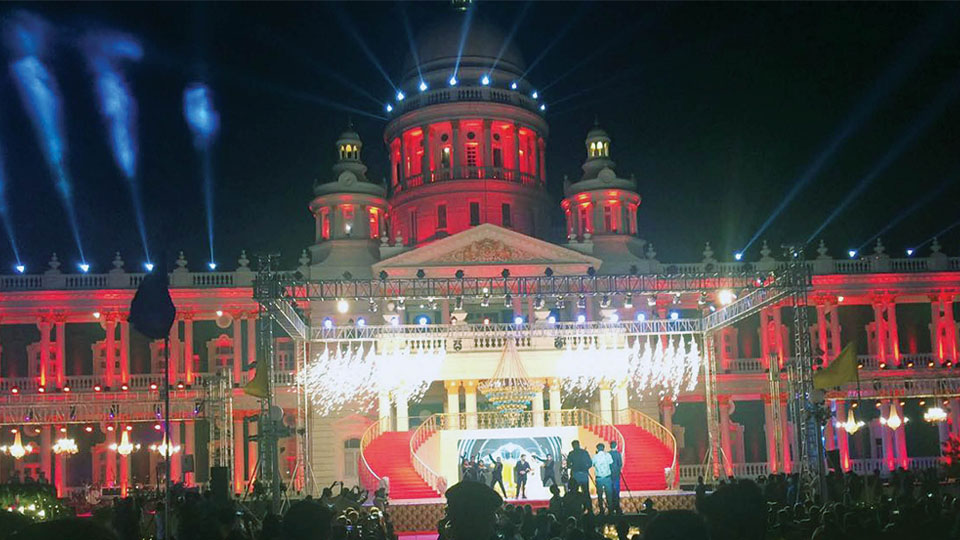 A ‘Monsoon Wedding’ in Mysuru

Last Saturday, Sunday and Monday were days and evenings I and my wife decided to stay put in city. That was to honour the wedding invite of my friend late A. Raghunath’s grand-daughter. Raghunath was popularly known as  Raghu because of the name of his enterprise.

When Raghu’s daughter Savitha and son-in-law Ramesh Kannan came to invite it was Raghu whom I was missing. I was sure Raghu would have been in a state of ecstasy no less about his grand-daughter Premita’s wedding with Govind.

Apart from her academic achievements, Premita is an accomplished Bharatanatya dancer. She was the protege of Dr. Vasundhara Doraswamy, the renowned Guru and dancer herself. I remember the obsessive interest Raghu took in arranging Premita’s Arangetram in city at the Jaganmohan Palace and the fabulous dinner arranged on the occasion for all the Rasikas who came there. I learn, when someone asked Raghu for organising the Arangetram in such a grand manner, he had said, as by a premonition, that it was because he might not be there for her wedding.

Well, in retrospect, his words were prophetic. However, we must take solace in the thought that Raghu will have no reason to be disappointed looking from his heavenly abode at the way the wedding was conducted.

The ceremonies and celebrations went with clock-work precision, smoothly, orderly and grandly so much so it must be the envy of grand-fathers who love their grand-daughters like Raghu did. Most importantly, there was no rain on all the three days, despite the wedding being held during the monsoon in Mysuru! Raghu must have done his home work from the high heavens asking the Rain God Lord Indra to hold back.

That was why I also remembered the famous award-winning 2001 movie of Mira Nair ‘Monsoon Wedding.’ Being a film, it was a romantic comedy with a happy ending and it even had a song with lyrics ‘Feels like rain’…

Yes, here in Mysuru too I felt like rain, but thanks to the prayers at Kerala’s Guruvayur temple, where I learn the couple tied the sacred wedding knot, and also the grace of Chamundeshwari. It seems, they flew into Mysuru on 23rd June by Helicopter from Guruvayur which made news in the largest circulated Malayalam newspaper of Kerala ‘Malayala Manorama’. When the bride and the groom with family members arrived at the Mysuru Airport in four Helicopters and drove to their house ‘Rukmani’ at Emerald Enclave in time for the evening Sangeeth, music and dance programme, for the close family and friends they were worried about the cloudy sky above. God’s grace, rains abated.

The bride was driven along the ramp to the stage by the groom in an ornately painted scooter to the cheering of the guests. I heard the events were managed by the well-known Kerala-based Event Management Company ‘Rainmaker Events and Entertainments,’ who fortunately do not make the rain. May be, they make money! A miracle for a wedding in the rainy season. A monsoon wedding without a drop of rain for three days! Interestingly, there was a puppet show featuring the bride and the bridegroom. A good effort…

The following day at the huge  Lokaranjan Mahal Grounds (Circus Grounds) in Indiranagar was the traditional Malayali Hindu wedding under the water-proof Palace-like structure. Thousands of people were served a sumptuous plantain-leaf, sit-down lunch with no waiting time, finger-bowls to wash hands… Should one say more?

This done, the next evening the scene shifted to that iconic Lalitha Mahal Palace, now a hotel. I have been seeing the lighting and illumination of the Palace hotel for the last 16 years from my house which has an unobstructed front view of the Palace, a mere half-kilometre away as crow flies. Believe me, I had never seen it turned into a fairy land, or call it a fantasy world, like it was. Two huge red-carpeted crescent-shaped stair-cases descended from either side to the well-appointed landing where the young couple stood with their parents and received the guests.

While many went high on spirits, others settled for a wide range of gourmet dinner with innumerable veg and non-veg varieties set up in a long row like a food-court. Well, a Maya Bazar! When I left the place at 10 O’ Clock, the long queue was still there to greet the newly-wed couple.

Among the friends I met was one who also runs an Event Management outfit. And, I guess, he has the last word on this ‘Monsoon Wedding’ — Never seen a wedding of this opulence, scale and guest-friendly arrangements in my 40 years in city. He should know. Being the monsoon season, he said, there must have been a Plan-B in place at all the three venues. In fact, there was one at the Lalitha Mahal Palace Hotel because it was held completely in the Open Air.

But there was no need to invoke the Plan-B. Though I saw clouds racing over the Chamundi Hill nearby to the South, it was “all clear” when the wedding party arrived. The Lord of Guruvayur and Goddess Chamundeshwari must have had their Plan-C — the monsoon can wait, but not the wedding!

Tailpiece: A wag says parents may have lots of love for their children and tonnes of money. But few know how to spend that money to organise the wedding of their children the way it was organised for Premita.