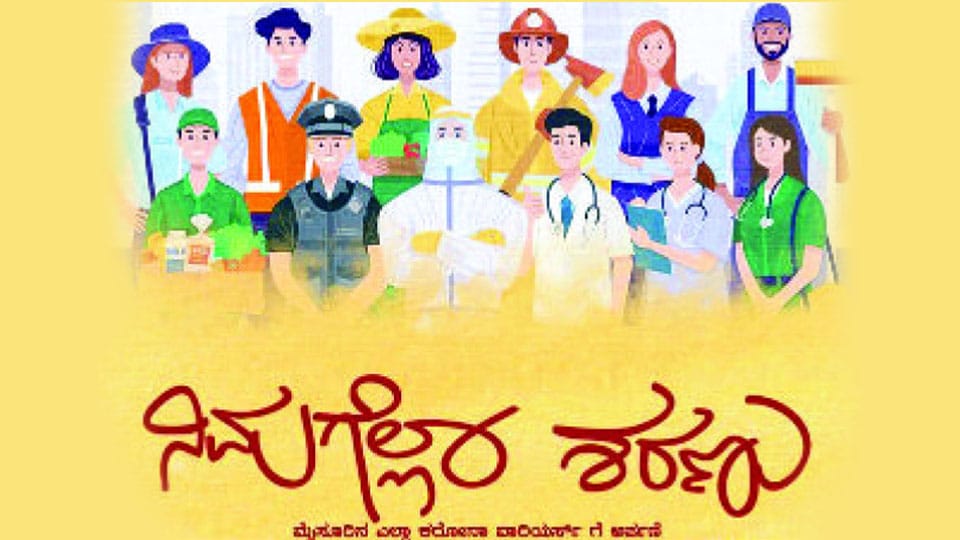 A salute through song…

Mysore/Mysuru: Mysuru is being considered a model district for the whole of the country in its fight against COVID-19 pandemic.

The speed in which the number of Corona positive rose had created panic among the people and had also put everyone into worry that Mysuru might top the list of highest Corona positive cases. However, the Corona positive cases, which went up to 90, recovered soon and number came to zero. Now, we have only one case while one patient was discharged yesterday.

So, the district with no new cases is shielded from Corona and all the credit must go to various Departments which worked in coordination with each other under the leadership of the District Administration.

People are taking to various media to express their gratitude towards Corona Warriors who have worked day and night in containing the deadly virus spread. Similarly, Bengaluru’s ‘SB Talkies – Events and Productions’ team has come up with a song titled ‘Nimagella Sharanu’ as a salute to the Corona Warriors of Mysuru in particular.

The song ‘Nimagella Sharanu,’ which has been shot at Mysuru for five  days, is to showcase the selfless services of the Corona Warriors and is dedicated to all Doctors, Nurses, Police, ASHA Activists and Pourakarmikas. It is available on SB Talkies YouTube Channel. – Sushma, SB Talkies

The video song features some of the visuals of Doctors, Paramedics, Ambulance staff, Police, Pourakarmikas and ASHA activists, selflessly working during this crisis hour.

Artistes including Rishi, Chandan Achar, Shivaraj K.R. Pet, Indu Nagaraj, Anuradha Bhat and others have also worked for the song.