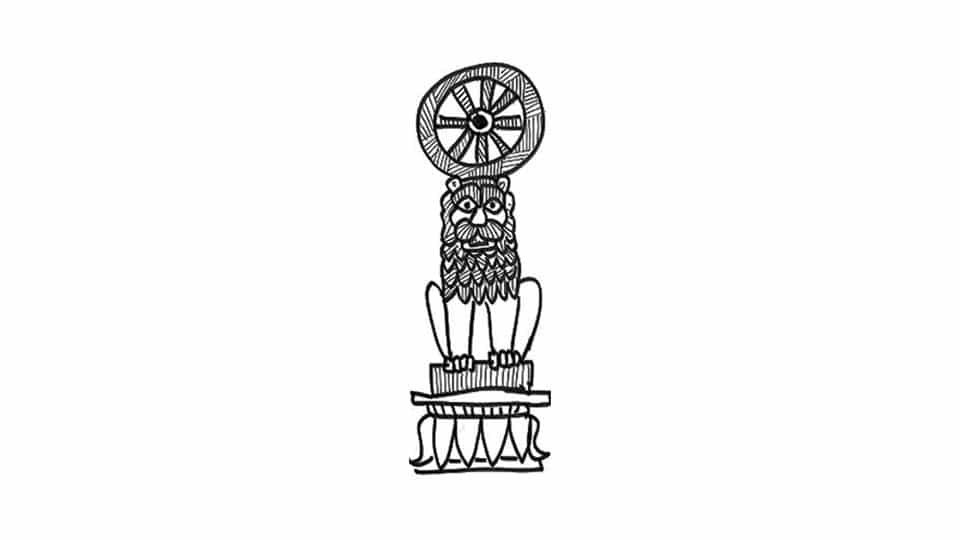 A scene from Yakshagana ‘Vali Vadhe.’

Persia refers to countries now known as Iran and Iraq. In ancient days, Iraq was called Mesopotamia, the fertile river crescent where one of the first civilisations was built around farming. Because of the repeated flooding, the gods were seen as capricious, making the lives of people difficult. Therefore, a priest was needed to commune with the gods. Priests thus became the first leaders of the community. They built ziggurats or pyramidal structures to reach out to the gods who lived in the sky to establish authority on earth. Gradually, the priest was replaced by the local strongman, the king. The king connected himself with gods by having sexual relations with the priestess. As lover of the goddess, he asserted right to rule over earth. Thus rose the Sumerian city-states. They were replaced by Assyrians who established the world’s first empire.

Assyrians believed that bloodshed and war ensured the survival of their empire. They used brutality to expand their rule over different kinds of people. But, they did not try to change the culture of the controlled people. They simply imposed a strict bureaucracy to collect taxes, and those who did not obey them were exiled from their homeland. They were responsible for the Babylonian Exile of the Jews, mentioned in the Bible.

The Assyrians were replaced by the Achaemenians. They spoke of one God, who was represented by fire. That god was supported by a group of angels, just as the current king was supported by a group, Satraps. They too had a complex bureaucratic system of managing various provinces without destroying local culture. They had learnt this from the Assyrians, but unlike Assyrians were more benevolent and believed that God was good and so the king had to be good, and work hard to keep away bad things—the creations of the Devil known as Angra Manyu. This is why diversity thrived. Achaemenian kings used art as propaganda and created images showing king hunting lions, guarded by angels. They helped the Jews return home and build their Second Temple.

From the Persians, the Mauryans understood how to use force. They learned the value of creating highways to reach the frontiers of the kingdom. They controlled the highways and used bureaucracy to tax the traders and business. They understood the value of symbolism and therefore built pillars of polished stone, mounted by symbols of royalty like the lion, the bull, the horse, and the elephant. Unlike Persian pillars, Mauryan pillars were single pieces, and supported no roof.

Inspired by Persians, the written word was introduced. For over 2,000 years, the Mesopotamians used a cuneiform script to document taxes, and to use them for accounting purposes. Indians, despite being familiar with them, shunned the written word until the Mauryans introduced the Brahmi script, which was used by Ashoka for administration and propaganda.

The Mauryan king was at the centre of his empire. His rule was established to the furthest corner of the kingdom represented by the rim of a wheel (chakra). The highway, in between, is represented by the spoke of the wheel. This made him the Chakravarti, who, in no small measure, was influenced by the Persian Emperor.