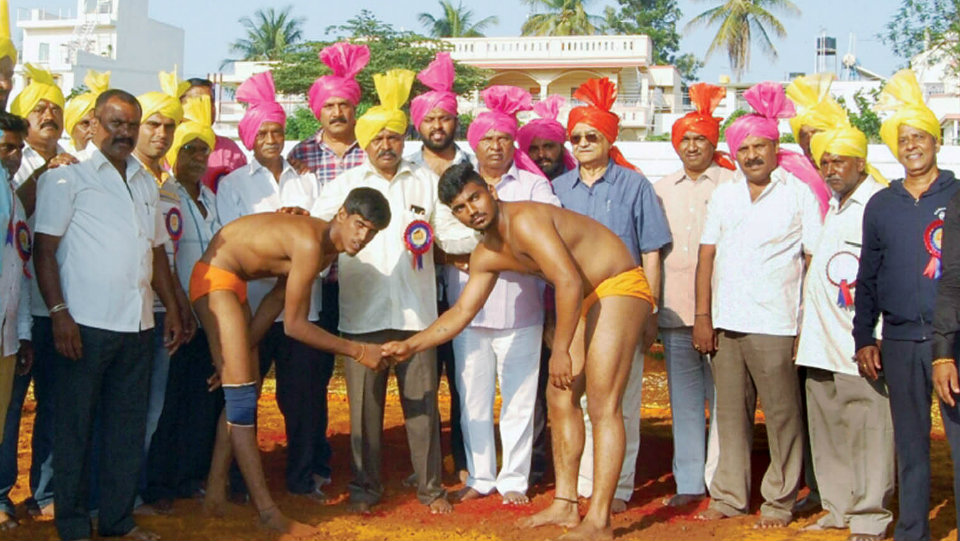 MLC Sandesh Nagaraj launched the Tournament by offering puja to Ambathayi near the wrestling arena.

In the Maar-Peet wrestling category, Vishnu Koshe of Pune defeated Lucky of Haryana, Praveen Chikkalli of Mysuru defeated Nagesh of Hampapura, Kiran Bhadravati of Davanagere defeated Nitin of Delhi, bout between Omkar Bat Mare of Maharashtra and Yashwant of Mysuru ended in a draw.

The result of other bouts are as follows: Jayasimha of Tumkuru lost to Yogesh of Mellahalli, Hucchappa of Davanagere lost to Ravi of Rammanahalli, Shivakumar of Magadi lost to Ramachandra of Rammanahalli, Gopi of Pune lost to Dhariyappa of Dharwad, Srinivasamurthy of Hunsur lost to Tejas of Ganjam, Vishal of Mysuru lost to Swami of Yandhalli, Shivu of Mysuru lost to Chetan Gowda also from city, Prasanna of Kalisiddanahundi lost to Prasad of city, Bharath of Yadahalli lost to Michael of city, Keerthi of Nagunahalli lost to Suni of Hosahundi. 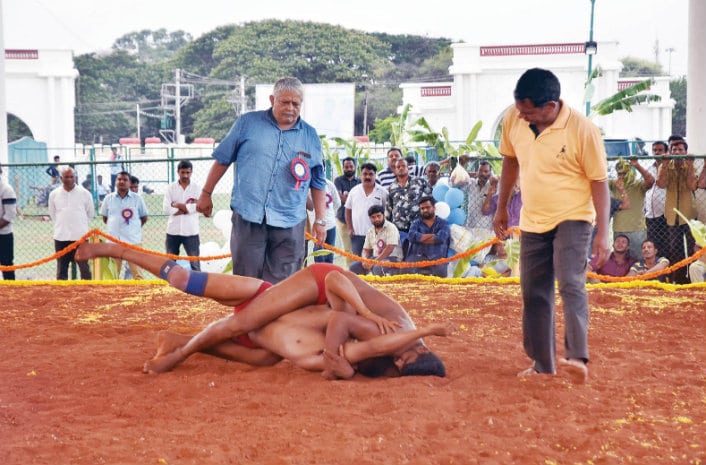 Picture shows pailwans fighting it out for the title.

The bouts which ended in a tie are as follows: Sujendra of Pandavapura Vs Swaroop Gowda of Kanakapura, Praveen of Dharwad Vs Raghu Naik of Rammanahalli, Ravi of Bogadi Vs Raju of Rammanahalli, Shivu of Nanjangud Vs Manoj of city, Sachin of Kyathamaranahalli Vs Nischit of Hongalli and Nitin of Srirangapatana Vs Cheluvaraju of Kuntanahalli.

Suryakanth of Nanjangud and Mohammed Razi Khan of Mysuru were declared winners as their opponents did not participate.

A close tie between two seven-year-old boys Sumanth of Bokkahalli and Tarun of Rammanahalli provided good entertainment for the spectators who were not deferred by the rain.