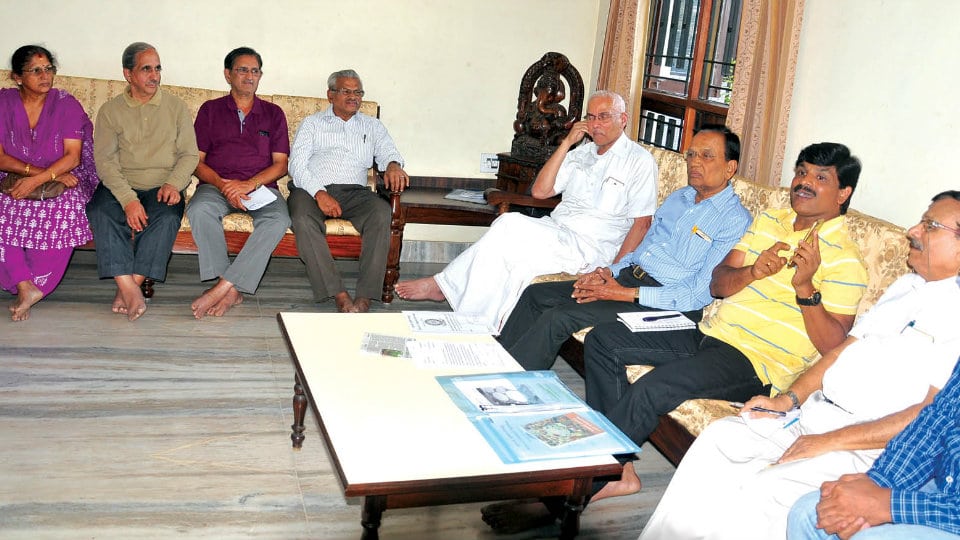 At the meeting, five topics were discussed: Computerisation of property tax, rampant violations of building codes, formation of ward committees, rampant use of plastic sheets to make idlies by hotels and roadside vendors, and the construction of a library in People’s Park.

In Karnataka, there are some cities like Bengaluru and Davanagere which have computerised the collection of property tax. However, in Mysuru, authorities have been putting the blame on the State Government for the failure. On this issue, MCC Commissioner Jagadeesha said that he was waiting for such software to be sent by the State.

Admitting that the Revenue Department has not been diligent in updating ‘khatas’ resulting in severe inconvenience to tax payers, he said that revenue officials are expected to check if tax payers have computed the tax properly. “Unfortunately such reviews have never been done before I took over. Now revenue officers have started checking and penalties are being imposed,” he said.

The Commissioner agreed that the MCC had no idea about how many properties in the city are under its control and there was no way to estimate potential revenues from property tax. “I have been able to improve tax collection by Rs. 30 crore after I took over,” he told MGP members.

He admitted that violations of building code are rampant in Mysuru. “So far I have given only one Completion Report (CR) for a completed building. This clearly shows how officials, residents and builders are ignoring the rule of law,” he said.

He warned MCC engineers that if the buildings violated building codes, he would hold them responsible. Just like auditors lose their licenses for wrongful submission of accounts, he will also ask for the cancellation of licences of architects who are involved in constructing such buildings.

Ashvini Ranjan of MGP suggested that each builder should put the approved plan at the construction site or on the website. To this, Commissioner said that he would get the proposal approved in the next council meeting.

When some members pointed out how some builders are using footpaths to store building materials, he agreed to take action against them.

As he was not familiar with the Supreme Court ruling regarding the formation of the Ward Committees, he said that he would talk to his Secretary to know the latest position of the government on the issue. MGP Secretary Dr. M.M. Shenoi listed a number of benefits in forming such Ward Committees.

He said that he was familiar with the menace of hoteliers and vendors using harmful plastic sheets while cooking idlies, the Commissioner said that he has contacted Hotel Owners’ Association on the issue. He has warned them that he would cancel their licenses if hotels continue to use plastic sheets instead of cloth.

According to the Commissioner, the State Government has changed land use of People’s Park by declaring that a part of it can be used for public buildings. It is because of such a decision the Park Act is not applicable in the case of People’s Park where a public library is planned.

On the dengue menace, the Commissioner said that the MCC was aggressive in fighting dengue. He said that 60 fumigating machines were purchased to reduce mosquito menace.

G. Jagadeesha MGP
Government has failed to protect law and order
A Date with Red Dates