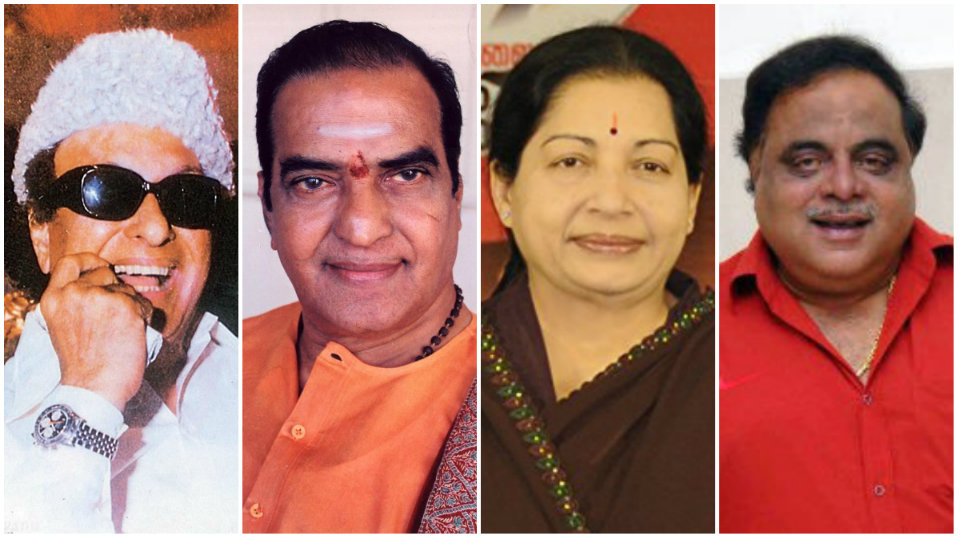 Actors who made politics their second choice to retain fame

Mysuru: India is a land of opportunities. Be it in the field of entertainment, business or even politics, it has welcomed newcomers with an open arm. Just a couple of days back, ‘Thalaiva’ and ‘Style King’ Rajinikanth entered politics and announced that he will form his own political party.

Though the announcement came as a New Year gift for Rajini fans, it was a jolt for the Dravidian parties — DMK and AIADMK — which have ruled Tamil Nadu for about 48 years since 1969.

The State has the legacy of film actors and many of them became Chief Ministers.

Popular Tamil actor M.G. Ramachandran, popularly known as MGR, entered politics through Congress party before joining hands with Annadurai to join DMK. However, he quit DMK after the demise of Annadurai to form his own AIADMK and rout the DMK, now led by Karunanidhi, out of power.  MGR led the party successfully during the Assembly elections held in 1980 and 1984.

After the demise of MGR, his wife Janaki Ramachandran took the oath as the CM though J. Jayalalithaa was in the race. Later, Jayalalithaa was able to gain the support of AIADMK comrades became the Chief Minister for five terms and like her political guru MGR, Jayalalithaa breathed her last while in power.

There are also the likes of Vijaykanth, Founder of Desiya Murpokku Dravida Kazhagam (DMDK), who was twice elected to Tamil Nadu Assembly (2006-and 2011), Sarath Kumar, who successfully contested on an All India Samathuva Makkal Katchi ticket from Tenkasi constituency (2011) and previously served as Rajya Sabha MP from DMK. Prior to Superstar Rajinikanth, his actor-colleague Kamal Haasan also expressed his desire to enter the political fray and his willingness to become the Chief Minister. In fact, he also met the AAP Chief and Delhi Chief Minister Arvind Kejriwal. But, he is yet to announce his political affiliation.

Another legendary actor, who was able to successfully enter party politics, is none other than N.T. Ramarao, the Founder of the Telugu Desam party in Andhra Pradesh in 1982.

NTR, as he was popularly called, served as the Andhra Chief Minister for three terms spread across seven years (1983, 1984 and 1994). In fact, NTR also played a vital role in national politics when the National Front led by V.P. Singh was in power at the Centre. NTR’s sons, Nandamuri Harikrishna and Nandamuri Balakrishna, both actors, have also been active in Andhra politics.

Yet another actor, who entered politics in Andhra with a bang is Megastar Chiranjeevi. The actor launched his own party ‘Praja Rajyam’ during August, 2008 but it failed miserably as it only won 18 out of 294 Assembly seats in the 2009 Assembly Polls. However, the party was later merged with Congress. In fact, Chiranjeevi also served as the Union Minister of Tourism during UPA-2 regime.

Joining the list of the legendary actors who successfully contested elections is Amitabh Bachchan.

The iconic actor has been a one-time MP from Allahabad Lok Sabha constituency which he won during the 1984 General Elections defeating Hemawati Nandan Bahuguna.

The actor then resigned as an MP after three years calling the elections a ‘cesspool.’ Later, V.P. Singh won the election as an independent candidate during the 1988 by-election. Amitabh Bachchan’s wife Jaya Bachchan is presently a Rajya Sabha MP from Samajwadi Party.

There are many other actors who have frayed into politics from Bollywood. Among them are Dharmendra (BJP MP from Bikaner constituency in Rajasthan – 2004), his wife Hema Malini (BJP MP from Mathura constituency – 2014). Hema Malini was also the BJP Rajya Sabha MP from 2003-2009 and the Party General Secretary as well.

There are also actors from the Kannada Film Industry, who tried their hands in politics. Among them, the celebrity who tops the list is Ambarish, popularly known as ‘Mandyada Gandu’. A three-time MP (1998 (JD-S), 1999 and 2004 (Congress)), former Union Minister of State for Information and Broadcasting, present MLA from Mandya Constituency who was also the Housing Minister, Government of Karnataka until the previous Cabinet rejig.

Apart from Ambarish, there are many stars who have made successful inroads into politics. They include legendary Anant Nag, who was elected from Malleswaram Assembly constituency in 1994 on Janata Party ticket. He also served as the BDA Minister in the J.H. Patel Government;  Shashikumar, from Chitradurga Lok Sabha constituency on a JD(U) ticket in 1999; Divyaspandana or popular as Ramya Congress MP from Mandya LS constituency  (2013 by-poll), Umashree (now Minister for Kannada and Culture; Women and Child Welfare – elected from Terdal Assembly Constituency  during 2013); C.P. Yogeshwar (five-time MLA from Channapatna constituency – 1999, 2004, 2008, 2011 (by-poll) and 2013); Jaggesh (Congress MLA from Turuvekere constituency. He later resigned to join BJP and was subsequently made MLC); Tara (BJP MLC), Jayamala (Congress MLC), ‘Mukyamanthri’ Chandru (one-time MLA and MLC), B.C. Patil (two-time MLA from Hirekerur constituency – 2004 (JD-S) and 2008 (Congress).

There are also actresses like Rakshita and Pooja Gandhi, who have joined political parties but have failed to make any impact. The latest among the Kannada movie stars to join politics is ‘Real Star’ Upendra who has floated his own Karnataka Pragnyavantha Janatha Party (KPJP).

However, efforts to bring matinee idol Dr. Rajkumar into politics failed as the actor stayed away from electoral politics.

Entry of Rajinikanth and Kamal Haasan into politics is inevitable as Tamil Nadu lacks mass leadership similar to the likes of late M.G. Ramachandran and late Jayalalithaa. Will the people of Tamil Nadu support the ‘Thaliva’ (Rajinikanth) or ‘Ulaganayagan’ (Kamal Haasan) or support the already existing political  parties? Only time will tell.