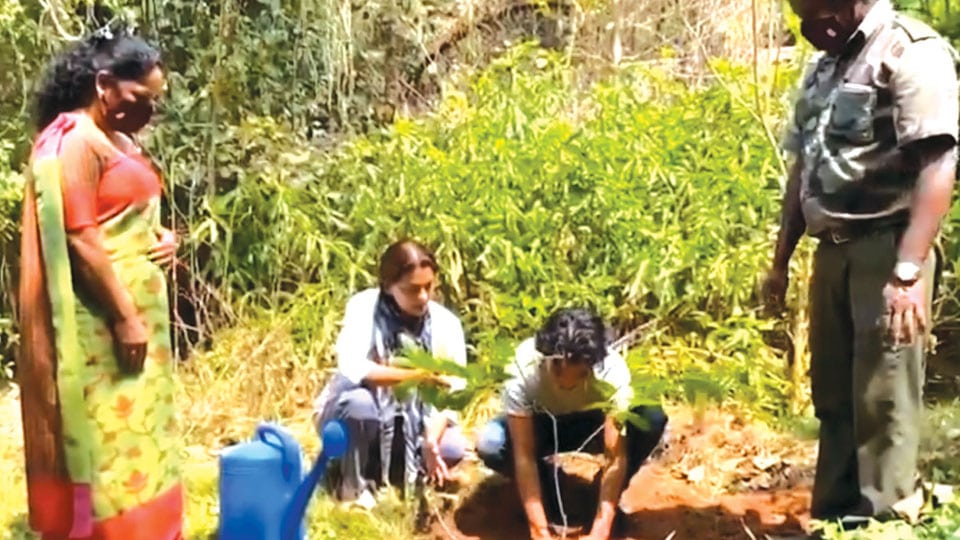 Mysore/Mysuru: Actor and former Miss India Juhi Chawla and her family has toured Kabini and Nagarahole regions of Mysuru and has returned to Mumbai. An avid traveller, the actor and her family members usually go abroad — London and Uganda — where they have their homes and this time they have chosen Mysuru for a short vacation amidst jungles.

Sources told Star of Mysore that the actor and her family arrived in Mysuru on Feb. 16 and headed straight to Kabini Dam in H.D. Kote and went to Karapur Jungle Lodges. They visited Nagarahole Tiger Reserve and stayed at Evolve Back Resorts (earlier Orange County Resorts).

She has tweeted from the resort: “At the Evolve Back Lodge, besides the Kabini River in Karnataka, going on a tiger safari at the Nagarahole Wildlife Reserve.”

Later at the resort, Juhi and her son Arjun planted and watered a sapling.

Juhi has posted another photo on Instagram and in the photo the 53-year-old actor is seen sporting a no-makeup look while keeping her style-file casual. The actor can be seen in a white round-neck t-shirt while keeping her freezy hair open.

The actor has shared a video of her and her son Arjun planting and watering a sapling. Her son even sprinkled mud on Juhi’s head while the actress was watering the sapling. She has posted the video on her twitter account and has said, “With my reluctant helper Arjun… planted a tree at the lodge where we were staying … Evolve Back, Kabini.”