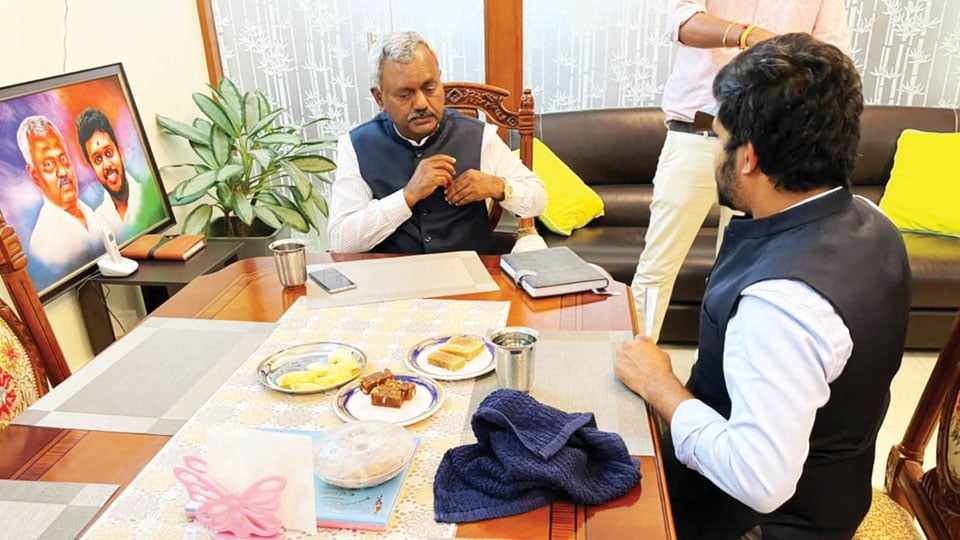 Will Naganahalli Satellite Railway Terminal get funds in Budget?

Mysore/Mysuru: Will the ambitious Satellite Railway Terminal at Naganahalli — at an estimated cost of Rs. 789.29 crore — get a boost in the State Budget to be presented by Chief Minister B.S. Yediyurappa on March 8? The first phase of the project is estimated to cost Rs. 494 crore.

Urging the allocation of a minimum Rs. 200 crore for the project, Mysuru-Kodagu MP Pratap Simha has requested Mysuru District Minister S.T. Somashekar to impress upon the CM to sanction the money for the project to be taken up with the Central Government (Railways).

The MP told the Minister that the Satellite Terminal is a much needed one to expand the services of Mysuru Railway Station and to increase passenger convenience. Among the benefits of the Naganahalli terminal are, many new services can be started and it will ease pressure on Mysuru City Railway Station that is presently handling about 90 passenger-carrying trains per day.

Four platforms, four stabling lines and two pit lines were planned under phase-I. In phase-II, four stabling lines and two pit lines are planned. The project needs 165 acres of land and the proposal for land has been sent to the State Government. “The Government must acquire land for the project and hand over to the Railways.  Rs. 200 crore is needed for this purpose,” Somashekar was told.

Once the Naganahalli terminal station becomes a reality, there will be more scope for additional trains to come to Mysuru, especially from Bengaluru. Naganahalli terminal’s objective is to de-congest the city as well as to provide better service to passengers residing in sub-urban areas. The project is planned on the outskirts of the city where trains can originate or terminate, the MP told the Minister.

Introduction of new services with the existing infrastructure at the City Railway Station is impossible and the Naganahalli terminal can take care of the projected passenger traffic and achieve a growth of 10 percent annually for the next 20-25 years, the MP reasoned.

Also, Pratap Simha urged the Minister to convince the CM to release funds for filling up of water to 49 lakes in Hunsur taluk. As per the Detailed Project Report (DPR) prepared by the Water Resources Department, Rs. 63.50 crore is required for the project and there is an urgency to implement the same, he noted. The Estimation Committee has approved the project in 2017 and it was awaiting the budgetary allocation, the MP told the Minister.