Home » Sports » Age is just a number for him 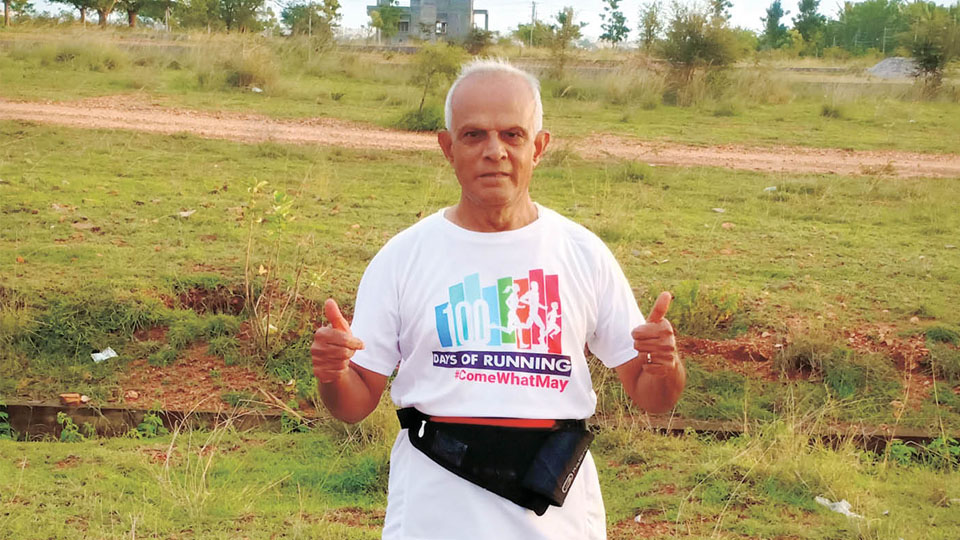 Age is just a number for him

It is often said “Age is just a number.” We have come across many who have taken up inspirational work at the time when they are leading a retired life. With many having settled in Mysuru post retirement to lead a calm and peaceful life, many of the elderly citizens have taken up works they wanted to pursue while they were in their hay days.

Now being the era of fitness and staying healthy, we come across people who have been practicing Yoga, Swimming, Athletics and other sports to keep them going.

One such person is G. Mohan, Assistant Controller of Defence Accounts (retd.). Having taken up running at the age 65, in 2014, he has gone to achieve many accolades in 5k, 10k and long distance running as well. Now, he is preparing himself for the half marathon event coming up in Mysuru. He has not only participated in events held in Mysuru but also in various parts of the country.

Mohan, who completed his studies in Mysuru, left the city in 1971 to pursue his career. He has lived in cities such as Mumbai, Jabalpur, Bengaluru and other cities before settling in Mysuru post retirement.

A resident of Srirampura in city, Mohan has achieved the fete of covering 2024.5 kms in 100 days in the ‘Daily Run Challenge’ organised by Indian Marathon, which he started on Apr. 27, 2019 and ended on Aug. 4. He was ranked 39 in age group 60-69 years in the country for the achievement.

Speaking to Star of Mysore, Mohan, who is now 72, said he started running to prove that people can do anything even at the later stage of their life and express themselves.

Mohan’s daily routine involves 13-14 kms run in the morning hours. He starts at about 5.30 am and completes by around 8 am. This is not all. He again runs for about 6-7 kms in the evening taking the tally up to 21 kms on a single day.

He will be next taking part in the 21k half marathon to be organised in Mysuru after which he plans for an event in Coimbatore in Tamil Nadu. Mohan has also taken part in few of charity runs to raise funds for old age homes and cancer patients.

A true inspiration, Mohan is living with his wife K. Suba Mohan, a home maker. The couple have a son M. Gururaj, who lives in Dallas, Texas, USA and a daughter M. Sangeetha Rao, who stays in Chennai.