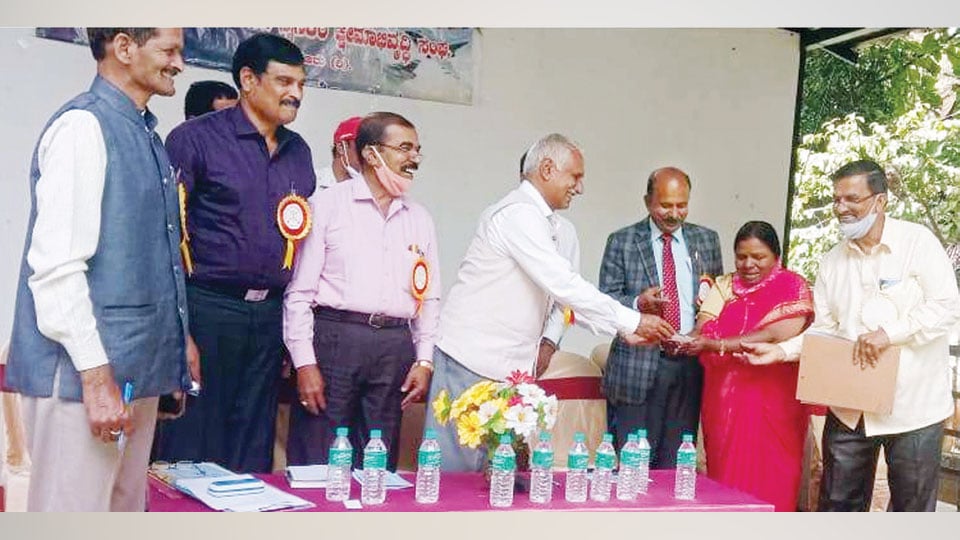 Addressing the members, Association President and Army Veteran Kanjithanda Aiyappa (Mani) said that even though the name of the association is ‘Kodagu Ex-Servicemen Welfare Association’ one of the main objectives of the Association is to take up the common causes of ex-servicemen suo moto irrespective of military veterans’ caste, creed, religion and region they belong to.

Citing an example, Aiyappa stated that even in the Indian Army many Regiments are named after certain regions of the country and communities such as Madras Regiment, Sikh Regiment, Bihar Regiment, Dogra Regiment and 37 Coorg Medium Regiment, etc. However, the only objective of the entire Regiments in the Indian Army is to protect the integrity and sovereignty of the country from external aggression and internal disturbances and also to help the civil administration during natural calamities.

He also mentioned that as per the suggestion of the members, the Association has submitted an application to Mysuru Urban Development Authority (MUDA) for the allotment of a Civic Amenity site (CA site) as per the recent notification of MUDA inviting applications for CA sites.

While discussing various agenda points during the AGM, a widow of an Army veteran had sought a clarification from the Honorary Legal Advisor of the Association, Air Veteran Mandetira N. Subramani, whether widows of ex-servicemen could wear military medals during military functions.

Subramani, who is also the President of Mysuru-based NGO VeKare Ex-Servicemen Trust, said that there is no bar on Veer Naaris and widows of ex-servicemen proudly wearing their deceased husbands’ authorised military medals on their chest in a befitting manner while attending meaningful military functions, Army / Navy / Air Force Days and during National Festivals such as Republic Day and Independence Day.

He further said that Veer Naaris and widows of ex-servicemen wearing military medals on such occasions would send a strong message that their husbands’ life/youth were sacrificed for the nation.

Philanthropist Dr. V. Puttalingamma, a retired scientist from DFRL, made a surprise visit to the venue of AGM and handed over a cheque for Rs. 25,000 to the President as donation for the welfare activities of the Association.

While addressing the gathering Dr. Puttalingamma urged the military veteran to save enough money from their own earnings for themselves and for their wives to meet their needs during their old age and not to depend on their children for financial help when they are working away from home or abroad.

Appachangada Motaiah welcomed. Veteran Basappa proposed a vote of thanks.