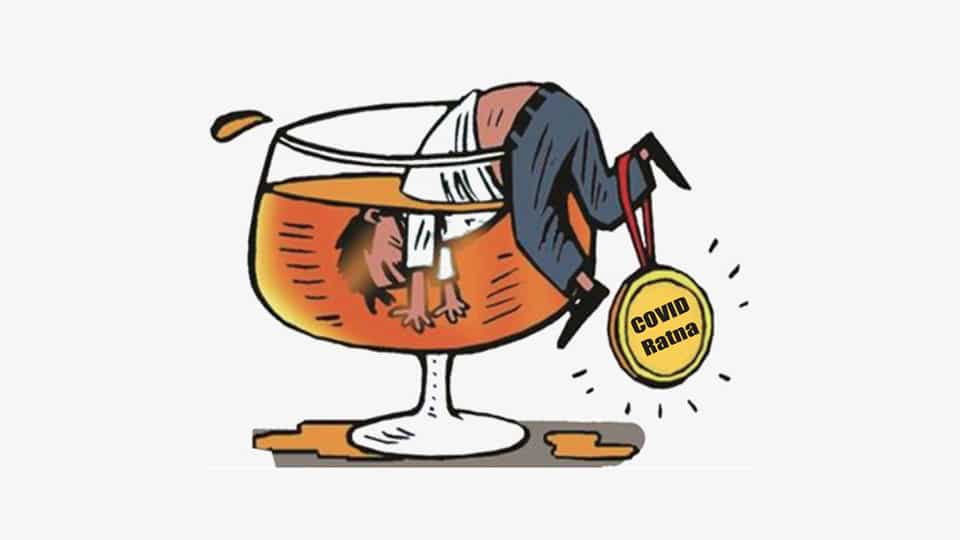 Indian States are addicted to alcohol. If they don’t sell enough of it, they suffer financial withdrawal symptoms. That is why our CM and also the CMs of other States requested the Prime Minister to lift the ban. And it seems their wish has been granted. Hic… Hic… Hurray!

Now here is the irony. Just three years ago, in 2017, the same BJP in Karnataka badgered the then CM of Karnataka, Siddharamaiah, to ban alcohol. Siddharamaiah refused to do so and informed the House that such a ban would lead to corruption, illegal sales and reduction in State’s revenue. To this C.T. Ravi, who is today a Minster in the State BJP, had said, “We banned arrack. Next we will ban liquor when we come to power.” Well, the BJP is in power now and what are they doing? They are desperately requesting the PM to lift the ban on liquor!

Alcohol is a massive revenue generator. Liquor sales brought in over Rs. 21,400 crores into our State Treasury last year, that’s 12% of our State’s income. And our State needs this immediate injection of money to pay our frontline workers, from Pourakarmikas to healthcare workers.

Punjab CM Amarinder Singh confessed, “Liquor is a major source of revenue for all States,” while requesting the PM to lift the ban. Similarly, Delhi CM who had stated that they do not have money to pay salaries of Government servants would be glad the ban is lifted as liquor sales make up about 14% of Delhi’s tax revenue.

Now the flip side of this is that, according to a 2018 World Health Organisation (WHO) report, excessive alcohol consumption kills around 2,60,000 in India every year! Will this sudden lifting of ban drive people to binge drinking? Will it kill more people than COVID-19?

It is said alcohol is the elixir of the Gods, but the truth is, alcohol is also a balm for the poor. A tonic that helps them endure their harsh life. But with our economy broken, they may dive deep into alcohol-induced solace. Of course, this is a very dystopian view, but it would be better if the Governments were prepared.

This lifting of the ban will not only fill the State coffers but also put an end to alcoholics suffering from withdrawal symptoms. Just two weeks into the lockdown, six people in Tamil Nadu died after trying to substitute alcohol with after-shaves and varnish, while nine in Kerala committed suicide.

Speaking of Kerala, a State ruled by a Communist Party, I am reminded of a joke about former Communist Russia. In 1985, Russian President Mikhail Gorbachev started an anti-alcohol campaign. As production decreased, people had to stand in long lines to get their booze. Once there was such a line for vodka and one man got tired standing for hours. Frustrated he said, “I’m going to the Kremlin, to kill Gorbachev” and stormed off the line. An hour later, he came back. The line was still there, and everyone asked him, “So did you kill him? Did you kill Gorbachev?” The man replied “Kill him?! The line for that is even longer than this one!” Guess, the Communists in Kerala didn’t want to take any such chances.

Meanwhile, it is time to bust the myth that our ‘Chettas’ from Kerala are the heaviest drinkers in India. In fact, they are not even the heaviest drinkers in South India. That dubious honour goes to our ‘Machas’ from Tamil Nadu. The TN Government earned a whopping Rs. 31,157 crore for the year 2018-19! Kerala on the other hand earned a modest Rs. 14,504.67 crore for the same year.

Now one would think the dry State of Gujarat would be the lowest earner and it indeed is, earning a mere Rs. 11 crore in 2019 from liquor sales. But…in the same year the Gujarat Government reported they had seized liquor worth Rs. 252 crore!

Also, there is a Gujarat model for drinking and the rest. While other States have bars and pubs in buildings, Gujarat, it seems, has turned a whole Union Territory into its Bar and Restaurant — Daman and Diu. This small Union Territory, spanning 122 square kilometres, which is about 30,000 acres located just a few kilometres from the Gujarat border, not only earns over Rs. 300 core in liquor sales but also has over 260 bars, 50 liquor wholesalers, 60 hotels, 8 distilleries, one brewery and counting! Once again proving that one nation-one law is important not just to stop religious absurdities but also cross- border alcohol jaunts.

Every time you ban something in one State and don’t do the same in the other, cross-border “ban-induced tourism” increases. Like it happened in a small town in Kodagu called Kutta. Kutta is on the Karnataka-Kerala border and when Kerala banned alcohol in 2014, a ‘booze-cruise’ service began in Kerala. Buses from Kerala would bring drinkers in the morning to Kutta and after a wonderful day of boozing take them back.

For now, the drinkers are happy to get their fix but soon they are sure to get cocky. In the coming weeks husbands will justify their generous pegs as an inconvenience they have to endure so that frontline workers can get paid. And some others will arrogantly claim they are funding the fight against COVID when questioned about their afternoon drinking session.

So if you encounter a drunk on the road in the coming weeks, please do not honk, he may stop mid-way and acknowledge you as he thinks you are thanking him for his service, like it’s being done with honks for doctors in America.  Just treat him like a holy cow. Wait or drive around and don’t make eye contact.