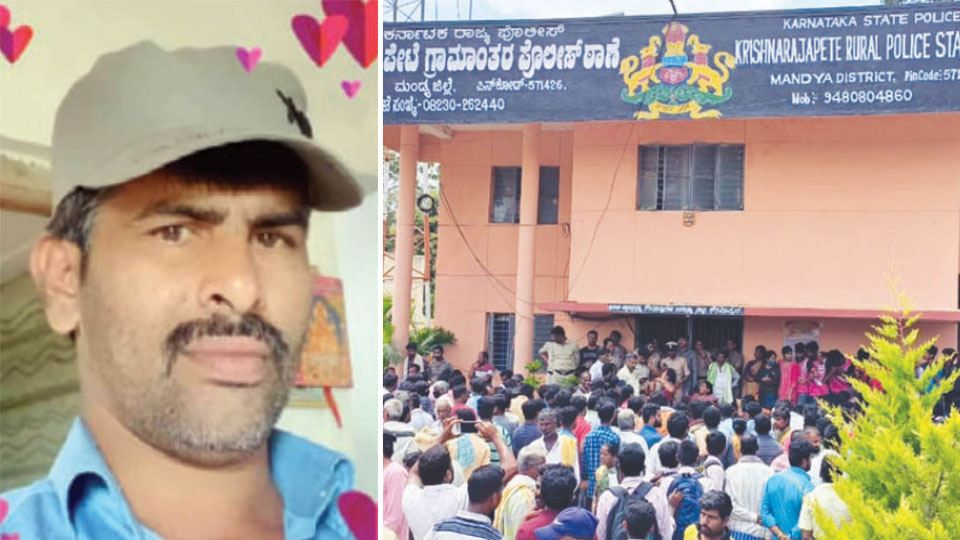 K.R. Pet: Alleging that Police have displayed negligent attitude in tracing his kidnapped daughter, a man committed suicide by hanging self at B. Bachanahalli in the taluk on Wednesday and the villagers, holding the Police responsible for the man’s death, staged a protest by keeping the body in front of Police Station.

The deceased is Ravi (45) of B. Bachanahalli. On Sept. 16, Ravi’s minor daughter went missing. In his complaint, Ravi has stated that when he and his wife had gone to their agricultural field, 26-year-old Abhi, son of Narasimhegowda and 31-year-old Sunil, son of Timmegowda, who came near the house at about 10.30 am, lured his daughter and took her with them on their bike. He has further stated that when he went to Abhi and Sunil’s house, they were not present in the house and when he called his daughter’s mobile phone, the call did not get connected.

As his daughter is a minor, Ravi has urged the Police to initiate legal action against those who had kidnapped his daughter, according to his complaint lodged at K.R. Pet Police Station on Sept. 17. The Police, who had filed a kidnap case, had begun their investigation. But yesterday morning, Ravi ended his life by hanging self from a tree in his field.

Meanwhile, villagers, who gathered in large numbers, placed the body in front of the Police Station and staged a protest. They alleged that the Police did not make any attempts to search for the girl and if the Police had searched for the girl, Ravi would not have ended his life.

Mandya SP N. Yathish, who reached the protest spot, told protesters that the girl’s school documents would be checked and if it is found that the girl is minor, those who took her with them will be arrested and legal action would be initiated against them. Following the SP’s assurance, villagers withdrew their protest.

B. Bachanahalli K.R. Pet
Police Constable suspended for his involvement with rowdy-sheeters, matka racketeers
Mysuru Rail Museum to be illuminated from Sept. 26 to Oct. 5