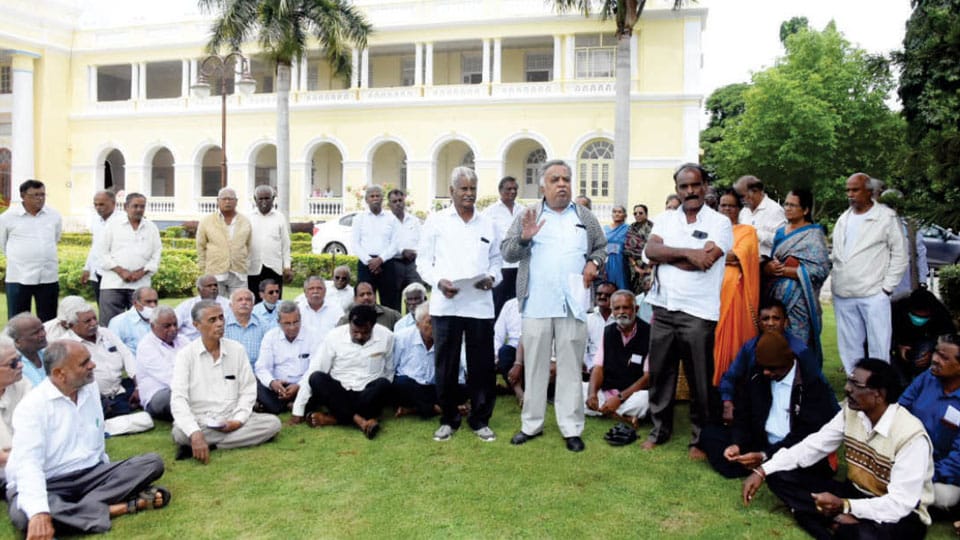 Mysore/Mysuru: Concerned over reports that more than Rs.100 crore of Pension Funds of University of Mysore (UoM) has been unauthorisedly diverted for other purposes, former UoM faculty members and employees, under the banner of UoM Retired Employees Federation and UoM Retired Teachers Association, held a meeting at the lawns in front of Crawford Hall this morning.

Addressing the meeting, Prof. B. Shivaraj, Senior Fellow, ICSSR, UoM, said that they are meeting to discuss the disturbing happenings allegedly going on in the University administration that threatens the safety and security of the University’s Pension Funds.

Noting that the Pension Fund belongs to the employees and is legally protected, Prof. Shivaraj contended that the administration and the rule of law in the University has collapsed.

The meeting elected Dr. K. Mahadev, a former Syndicate and Senate Member of UoM, as the Honorary President of Former UoM Teachers Association to take up the cause further.

VC reaction: When contacted to seek his reaction on the issue, UoM Vice-Chancellor Prof. G. Hemantha Kumar said that he is in Bengaluru to attend a meeting with the Governor-Chancellor and would speak later.