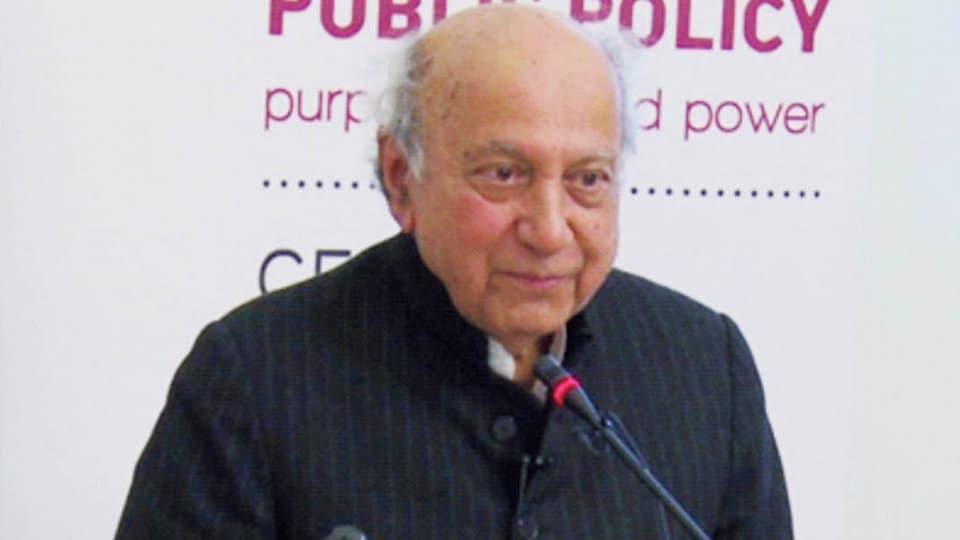 Recently we were invited to attend an international convocation in Mysuru city. The graduating students were mostly from universities abroad. They, wearing conventional gowns and hoods, were full of joy as it was a red-letter day in their lives.

At the event, however, all eyes were on Pascal Alan Nazareth who delivered the Convocation Address. Nazareth’s wife was also among the distinguished guests. University of Mysore Vice-Chancellor Prof. Hemantha Kumar and Registrar Lingaraja Gandhi were on the dias.

Nazareth has a master’s degree in Economics from Madras University. He was selected to Indian Foreign Service in 1959 and during the course of his service in Indian diplomatic and consular missions, he served in Tokyo, Myanmar (Burma), Lima, London, and Chicago. He has also served as India’s High Commissioner to Ghana, and ambassador to Liberia, Upper Volta, Togo, Egypt, Mexico, Guatemala, El Salvador and Belize.

During his illustrated career, he had performed many distinguished duties such as the Director General of Indian Council for Cultural Relations. He had arranged festivals in Britain, USA and France and International conferences on Buddhism and National Cultures.

He has conducted international conferences on India and World Literature in New Delhi and organised events where many scholars presented papers on how India has been projected in world literature and India’s contribution to world literature.

When Nazareth was an ambassador to Egypt and Mexico, he published two scholarly books titled “India and Egypt” and “India and Mexico” which are highly authoritative and are useful for scholars to understand the political and cultural relations between India and Egypt as well as Mexico. These books are useful even today to scholars who are interested in knowing the history and culture of these countries.

Nazareth retired from service in May 1994. He did not take rest but thought of doing something different in the field of culture. He started lecturing as he wanted to share his rich knowledge. The institutes which invited him were many including National Institute of Advanced Studies, Indian Institute of Management, Bangalore and National Defence College,  New Delhi.

Nazareth’s lectures have been so precious that the authorities thought that they should have a wider audience and hence he prepared CDRS named “Historical perspectives — Asia and Historical perspectives — Europe.” In fact, most of the general public have not heard even the names of those countries, but Nazareth had become so famous as to be invited by these international organisations.

With these laurels Nazareth wanted to serve the scholarly world by more contributions. The most important among them is that he became the founder and Managing Trustee of Sarvodaya International Trust. People may recall that Mahatma Gandhi’s dream was Sarvodaya which was given shape by Vinobha Bhave and Jayaprakash Narayan who believed that Swaraj was everybody’s birth right.

In fact, Sarvodaya movement was not new to India. The sages of yore had welfare of the entire humanity as their motto and worked in this direction as a penance. There lived in India many Jain saints like Samantrabhadra. In one of the books authored by this saint, he states that Sarvodaya is the only remedy for combating all calamities, natural or manmade. This is the motto which Nazareth also has. Perhaps Nazareth might have been influenced by some of these great scholars.

Gandhi’s idea of Sarvodaya was inspired by John Ruskin’s “Unto the Last”. Gandhi had translated this work into Gujarati language and gave the title “Sarvodaya”. Actually it is a Biblical work and it has envisaged the noble idea that even the lowliest should get social justice. Gandhi believed that improvement of down-trodden, and people who are suffering from poverty can happen only if we follow Sarvodaya.

Nazareth’s book “Gandhi’s Outstanding Leadership” was released by former Prime Minister I. K. Gujral at United Nations. He is also recipient of many more awards which are too numerous to be mentioned here. Nazareth is a great scholar in Advaita Vedanta as propounded by Adi Shankaracharya. Nazareth is the Chief of Gandhi Centre at Bharatiya Vidya Bhavan, Bengaluru.