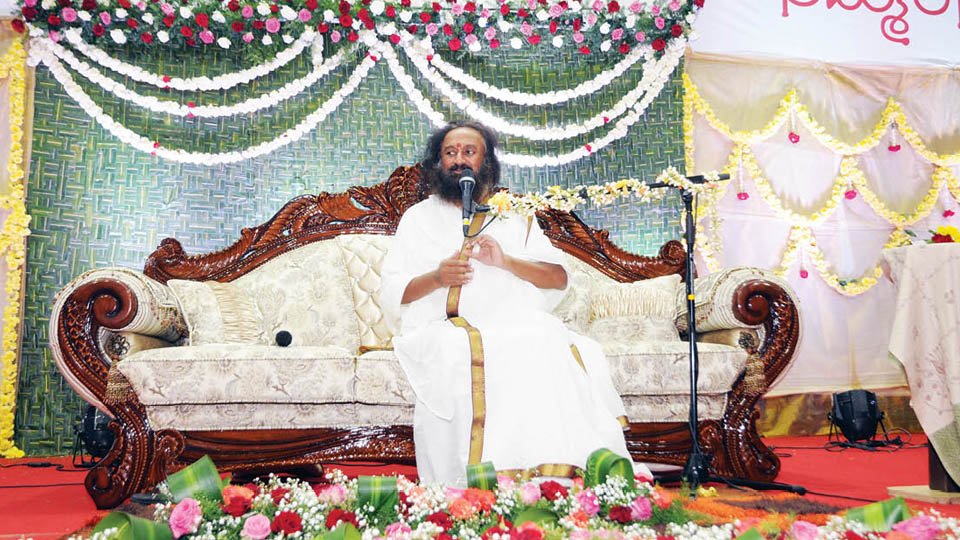 An evening with Ravi Shankar Guruji

Art of Living (AoL), an institution founded by Sri Sri Ravi Shankar in 1981, has gone international and so when I got an invite from  Shantha, the local convener of AoL, Mysuru, asking me to come for a “Sammilana” a meeting with the Guruji, I was intrigued. I did ring her up and ask her the purpose of this meet. She mentioned that Guruji just wanted to casually meet some Mysureans and talk. Since he did not want a vast gathering they decided to invite about 300  people for the event, hosted at Senate Bhavan, Manasagangothri.

I was very curious to know as to why Guruji was called Sri Sri, whereas most of the Gurus and Swamis I had met or heard about had a prefix of a single Sri?  Well, I called up my friend Sarasa Vasudevan, who happened to be a senior disciple of the Guruji. It seems Guruji was originally called as Pandit Ravi Shankar. But the sitar maestro, who also was called as Pandit Ravi Shankar, objected to this since his name was an international brand! Talk of egos. Guruji did not make an issue and changed his name to Sri Sri Ravi Shankar and ensured there was no confusion.

As a matter of chance, I had a chance to meet the Guruji face to face. Well, I go for my evening walk to Chamundi pada, the foot of Chamundi Hill, everyday and pray for a moment in front of the deity.  Guruji’s Ashram is next to the foothills and just as I stood in front of the deity, his cavalcade started to move towards the Hill for Chamundi darshan. As I turned back, I was surprised to see his car stop for a moment directly opposite to me in front of the pada. A momentary glance and a darshan of Guruji! Blessed.

An importance of a politician is gauged by the number of cars in a cavalcade. Guruji’s cavalcade including a pilot Police car had nearly 40 cars. Imagine this kind of cavalcade in a traffic choked Bengaluru! Police escort is a recent development. It seems, there has been some threat to him after his recent involvement in Kashmir and Ayodhya issues.

I have attended a few satsangs of Guruji but every time I go for a meeting, I am always amazed at the organisation of his Foundation. The Guruji has a dedicated band of volunteers, who work tirelessly and with dedication. With a huge smile they greet you with folded hands and ensure that every one is comfortable. At the Senate Hall they had organised badges for all invitees expecting our Mysureans to come with their invitations as requested. But… easy going adjust madi. Their phones were not on silent mode during meditation even after being told so several times. Ultimately all those who could make it were let in.

Flashback: Born in a Tamil family settled at Bengaluru, Sri Sri finished his college at St. Joseph’s. But from his childhood he was keen on Vedas, Upanishads and could recite Gita at the age of 4! Very early in his life he had decided that yoga was his calling. After experimenting a lot with various yoga techniques he firmed up on a particular breathing technique called “Sudarshana Kriya” which is taught in his centres all over the world.

Medical researchers all over the world including our own nimhans have documented the benefits of this kriya on our body. It reduces depression, heightens awareness, reduces stress, strengthens immune system and  has a host of other benefits.

It is estimated that he has reached to about 370 million people around the world and a sought after dignitary by many a governments abroad. He travels to about 40 countries in a year and his Foundation is the first to respond to any distress call like earthquakes,  flooding, etc.

Frankly, it is nothing short of miracle how Guruji can get such a lot of dedicated, educated volunteers? I had witnessed his birthday celebration at Delhi. Thousands of volunteers were in place to take care of lakhs of devotees and to top it all the dance and music programmes with thousands participating.  When I was posted at Kovalam Ashok,  Kerala, we wanted to do a festival of Mohiniattam at the beach and decided to contact some schools of dance. Every dancer was being paid for his performance. With great difficulty I could manage to get about 50 artistes for the festival. Contrast this with the Guruji’s birthday — 1,000 mohiniattam dancers performing ! It seems they had no time or place to practice together, so the choreographer practiced the dance through the net! Nothing short of miracle.

Coming back to the present, Guruji started his discourse in Kannada invoking the blessings of Goddess Chamundeshwari. A top class communicator, he sensed that the audience were all tensed up and so quietly asked each of them to introduce themselves to the person sitting next. Awkward in the beginning but it did release some tensions of the air. Guruji went into detail about the aura, jealousy, ego, etc., of human beings. His ultimate advice was yoga in some form or other helps. He concluded with  a 20-minute  meditation. I have attended several sessions but Guruji’s meditation technique is very special.

Art of Living has become a huge organisation now and just like  Patanjali, they also manufacture several products like soap and toothpaste which were on sale at the venue. But unlike Patanjali, which has become a Rs. 10,000 crore company, the products manufactured by AoL is hardly known to public except to the volunteers. One of the reasons why AoL products are not very popular is that Guruji refuses to market them.

Guruji, marketing is a specialised subject which unfortunately cannot be done by your volunteers. It is time the Foundation appoints a professional marketing agency [not another disciple].  A tag line in Star of Mysore reads as follows: “If business is good it pays to advertise. When business is bad, you must advertise.”

Something very interesting caught my eye in the Sammilana. Three children were brought blindfolded and they really performed some wonders on stage. I was given to understand that this was due to the awakening of their intuitive powers by a special yoga technique developed by Guruji. Wonderful news to the young of Mysuru for at least some who can afford the fees of about Rs. 10,000. I was given to understand that the students who have undergone this yoga are doing wonderfully well in their studies and sports too.