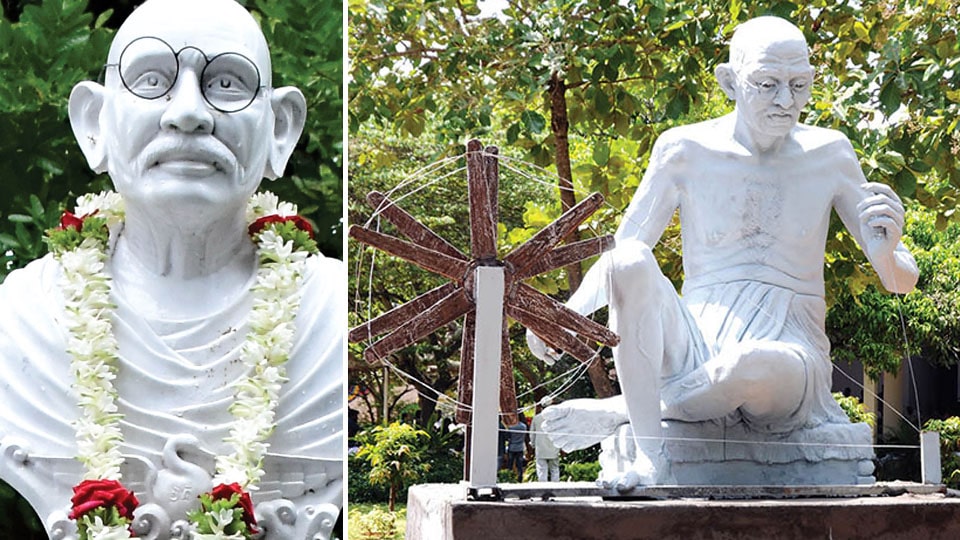 August 15, 1947 is a red letter day to us Indians because India got political independence from the British on that day. The first Prime Minister of Independent India Pandit Jawaharlal Nehru lowered down the British flag and hoisted India’s Tricolour. There was no TV then and we were glued to our Murphy radio till the whole celebration was over.

It is a well-known fact that Mahatma Gandhi took the lead in this process and he chose the word ‘Satyagraha’ which roughly means mild anger for the sake of truth. To Gandhi, truth was everything. That is why he called his autobiography as ‘My Experiments with Truth’ and lakhs of copies have been sold all over the world.

Under this background some important anecdotes connected with Mahatma Gandhi may be recounted here. Some of these anecdotes have been mentioned by my friend in his book ‘Mahatmara Hejjegurutugalu’ in Kannada collected by Vemagal Somasekhar.

One of the anecdotes is titled ‘Gandhiji and Calendar.’ In 1943, Gandhiji was a prisoner at Yeravada Jail. There was a calendar where a sheet had to be removed daily for the next day to show. This was being done daily by Meera Behen. After removing these small sheets, she used to keep them in a particular place.

Those days, Gandhiji was observing silence every Monday. Gandhiji used to write down replies to the visitors who came to meet him. One day Meera Behen was suffering from fever and the calendar sheet was changed by Manu Gandhi. But she did not preserve those calendar pieces but threw them away.

Gandhi searched for those small bits of paper but it was not there and he began to enquire everyone including Kasturba regarding them. Then Manu Gandhi told the Mahatma that she herself changed them but without knowing its value, threw them away.

Then Gandhiji asked her to go and search for those tiny sheets of paper. Along with her, even prisoners in the Yeravada Jail began searching for that sheet. Finally, it was found near the Samadhi of Mahadeva Desai and it was folded beyond recognition. Gandhiji felt happy and brought that pieces of paper into proper shape and on the very same day, he used it for his purpose.

When he had blisters

On another occasion during May 8th to 29th of 1933, Gandhiji was fasting in Yeravada prison. He was resorting to 21-day fast. During that period there was a blister in his ears. A specialist doctor examined Gandhi and gave some medicine to apply on the blisters. But no cure was found from that medicine. Then the doctors decided to perform a surgery.

Then Gandhiji requested the doctor to give him permission to do his own method to cure it. With reluctance, the doctor agreed. And the blisters were cured. The doctor requested Gandhiji to name the medicine which cured him in two days. Gandhiji told him that he had heated sesame oil with garlic and applied on the blisters. It was Gandhiji’s grandmother’s medicine. The doctors accepted defeat and Gandhi jokingly asked him to surrender his medical degree and give publicity to grandmother’s medicine.

Another incident is related to Ayyar Hotel in Salem. In 1930 that Ayyar hotel became famous as Gandhi-Ayyar Hotel and people had forgotten the original name. Ayyar had become a devotee of Gandhi and in the age where untouchability was practiced, Brahmins, Lingayats and others including Harijans used to eat at his hotel. As Harijans were eating at that hotel, many persons boycotted the hotel and without patronage, the position of the hotel became bad. But Ayyar did not care.

Inspired by this Ayyar hotel, the Salem Municipal Corporation announced that Harijans and all others can eat here together. In case any hotel refuses the entry of Harijans, the permit of that hotel would be cancelled permanently. Slowly, all higher community people began to visit the Ayyar Hotel and started eating there.

In 1934 when Gandhiji visited Salem, Ayyar requested Gandhi to visit his hotel and stay there for some time and bless the hotel. Gandhi agreed and Ayyar’s happiness reached new heights. Immediately Ayyar put up a canopy made of green leaves and decorated his hotel. Then he prepared a welcome speech where he promised funds for the welfare of Harijans.

This news of Gandhiji’s visit spread like wildfire. Hundreds of people crowded near that hotel. When Gandhiji arrived at about 3.30 pm, it was difficult to move about and there was a stampede. With great difficulty, Ayyar went near the car where Gandhi was sitting and handed over the money to Gandhi. Thus Gandhi-Ayyar Hotel became more famous and earned profits.

Gandhiji had to see a film. During his stay at Yeravada, because of his bad health British Government released Gandhi from the prison. One day wife of Morarji Desai requested Gandhi to see a movie. Till that day Gandhi had not visited a theatre. And Gandhi agreed. There was a theatre nearby and it was showing an English film ‘Mission to Moscow.’

However, Morarji Desai’s wife did not like Gandhi to go to the theatre because there would be a stampede. Hence, a special arrangement was made to show the film to Gandhi by bringing all the equipment to the place where Gandhi was staying. Gandhi saw the movie. When Morarji Desai’s wife asked for Gandhi’s reactions on the movie, he replied that he did not like half-naked women and their vulgar dance.

Then they requested Gandhi to view an Indian film ‘Ramarajya’ and Gandhi was happy. Perhaps he was a great devotee of Lord Sri Rama and saw the dream of the concept of Ramarajya where everyone would be happy.