Home » Columns » Another forgotten landmark from a bygone era ! 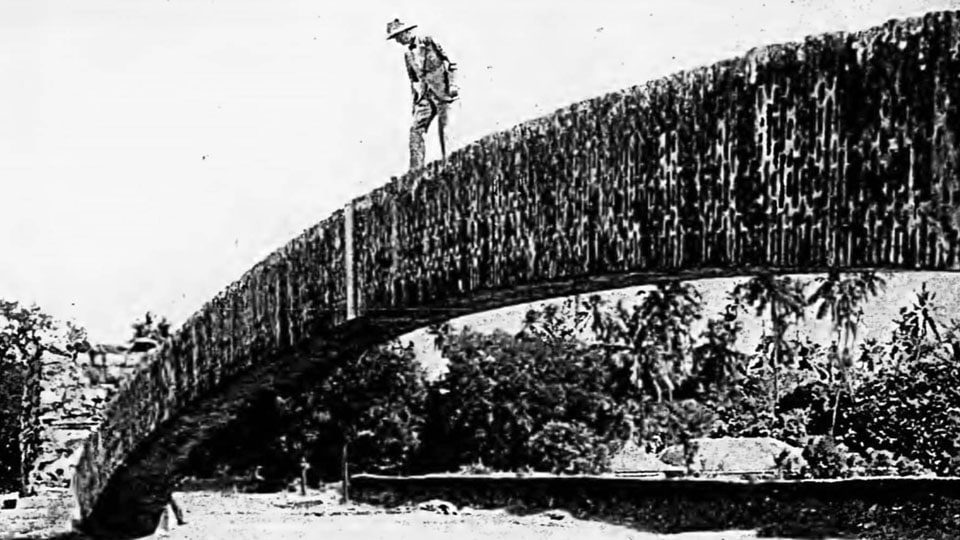 Another forgotten landmark from a bygone era !

Last week, in my article about the book ‘The Colonial Landmarks of Mysuru’  by Gauri Satya, my historian friend, I had made a reference to a most imposing but almost unknown monument built by Dewan Poornaiah to honour his patron Josiah Webbe of the Madras Council, at the spot very close to Srirangapatna, where a mutiny by British soldiers was crushed by the forces loyal to the Crown.

There is another very intriguing structure that once stood in Srirangapatna that astounded all those who were lucky enough to lay their eyes or set their feet on it but which has now almost disappeared from view. Only a handful old-timers who are alive and bound to be in their nineties now, may have seen it in its original form which it lost when it collapsed, in the year 1938.

The structure I am referring to is the De Havilland’s Arch which was perhaps more popularly known as the ‘Hanging Bridge’ of Srirangapatna. It was built by  engineer Thomas Fiott de Havilland who was born in Guernsey in April 1775 and went on to join the Madras Army in 1795 as an Assistant Engineer under the then Collector-Engineer  Major Colin Mackenzie.  Being an engineer, de Havilland was interested in buildings and building technology. He toured extensively to study the massive dome of the Gol Gumbaz in Bijapur, the monuments of Hyderabad and the Brihadeshwara Temple in Thanjavur. In all these structures, it was the cupola or the dome that struck his eye. He also designed the large, pillar-less hall of our Government House in the year 1805, a date which the beautiful and stately building still bears on its crown. His house in Srirangapatna was at the end of a road which led to the beautiful garden of Tipu Sultan called The Lalbagh where most of the British bungalows stood.

Seeing the serene Cauvery flowing nearby, he hit upon the idea of constructing an arched bridge across the river. He was very eager to build it with just five brick and mortar spans across its width where the Wellesley Bridge now stands. The proposal was received with much incredulity by the British administration and, hence, was not encouraged or followed up as it was considered almost outlandish. The idea of a hanging or arched bridge was not welcomed as most people felt that such an incredible feat of engineering was not possible. Thus, the Wellesley Bridge, built by Dewan Poornaiah, despite its rather crude native engineering, overtook de Havilland’s dream project, with Poornaiah sending a completion report on 20th June 1804 to Lord William Bentick, who was then the Governor of Madras.

Thomas de Havilland however persisted in his efforts to push his project through but the administration did not welcome the expensive idea of a second bridge. To show his prowess he decided to build an experimental arch at his own cost, in his own garden, five years after the Wellesley Bridge was completed. He hired native workers from Srirangapatna and the surrounding areas and started working on it. It is said that de Haviland personally inspected the building materials that went into its construction and since it stood in his garden, its daily supervision was not a problem for him. It was actually an experimental bridge and a smaller version of what was supposed to be a bigger structure. He used country-made bricks, lime mortar and other native materials like beaten eggs, plant juices and jaggery for its construction. The bridge took three years to complete and, in the middle of 1808, when it was finished the arch which had a span of a hundred feet became a marvel of that era. Its sobriquet as The Swinging Bridge came up as it used to swing up and down about six inches at its centre when people jumped over it.

The bridge survived for nearly 130 years till it collapsed in 1938 and today all that remains of the structure are the two upright pillars and the long, fallen section made of brick and mortar. It is just a short walk from the towering Ranganathaswamy Temple and the Srirangapatna Railway Station but you really have to look for it carefully amid all the thorny bushes that have grown around it.

READ ALSO  End of the tale of two Stalwarts!

A photo in the book ‘The Prince of Wales’ Eastern Book, which is a record of the monarch’s visit to India between 1921 and 1922, shows the young Prince standing on the fabled arch and testing its springiness! Incidentally, on 28th July 1921, as part of our Non-Co-operation Movement, the entry into our country of this man who was to become King Edward VIII was boycotted by the Indian National Congress, leading to a law-and-order problem in Bombay! Most notably, he was the man who abdicated his throne and title, after enjoying them for less than a year, to marry his lady love, Wallis Simpson, a commoner and a divorcee.

The story of de Havilland, his hanging bridge and his other accomplishments is no less romantic than any other adventure story. Between 1798 and 1800, de Havilland, who was also an accomplished artist, prepared sketches of Coimbatore, Dindigal and some regions to the West of Thanjavur for the British army. He played a significant role in the British defeat of Tipu Sultan too in 1799.

In 1801, he was sent to Egypt where he surveyed the city of Cairo and the site of the Suez Canal which was to come up nearly fifty years later. On his return journey, he was captured by French pirates but was released unharmed later. In 1805, he was appointed as an engineer to the Hyderabad Subsidiary Force of the Nizam of Hyderabad with directions to complete the survey of the Deccan which had been started by his boss Major Colin Mackenzie. In 1808, he married Elizabeth Saumarez  and settled down first at Srirangapatna and then at Mysore. He took a leading part in the European military officers mutiny of Srirangapatna which was put down by the British with a firm hand. Immediately after the defeat of his co-conspirators, he sought forgiveness and switched sides which ended his brief imprisonment at Bangalore.

The building of his arch was in a way a process of knowledge transfer of native architecture to European minds. By commissioning  the experiment of the great arch in his backyard, de Havilland became familiar with a wide range of Indian building methods and indigenous building technology. While the locals prepared the material and built the arch, he watched them closely and recorded the procedures meticulously. The bridge was thus his hands-on learning experience of working with local raw materials like bricks and mortar. He used his expertise gained here to build a massive dome for the St. Andrews Church on Mount Road in Madras. de Havilland lived there in a building which later became the Madras Record Office and he called his house ‘The Egmore Retreat’ in what is today’s Padupet. His wife Elizabeth died in 1816 at the early age of 35 and after a very brief married life of just eight years. She was buried in St. George’s Cathedral Cemetery, Madras, which was actually a cemetery conceived and built by Havilland himself.

Ironically, she was the first person to be buried there. Her memorial epitaph, penned by a grieving de Havilland himself, poignantly states: “… the afflicted husband who was forming this cemetery for public use, submitted with pious reverence to the inscrutable ways of Providence, which thus made him her protector in death as in life!” A very sad lament indeed of a man whose loneliness would  torment him for a full fifty years, till his own death at Guernsey, his birthplace, in the year 1866!