Home » Columns » A Bridge too far? 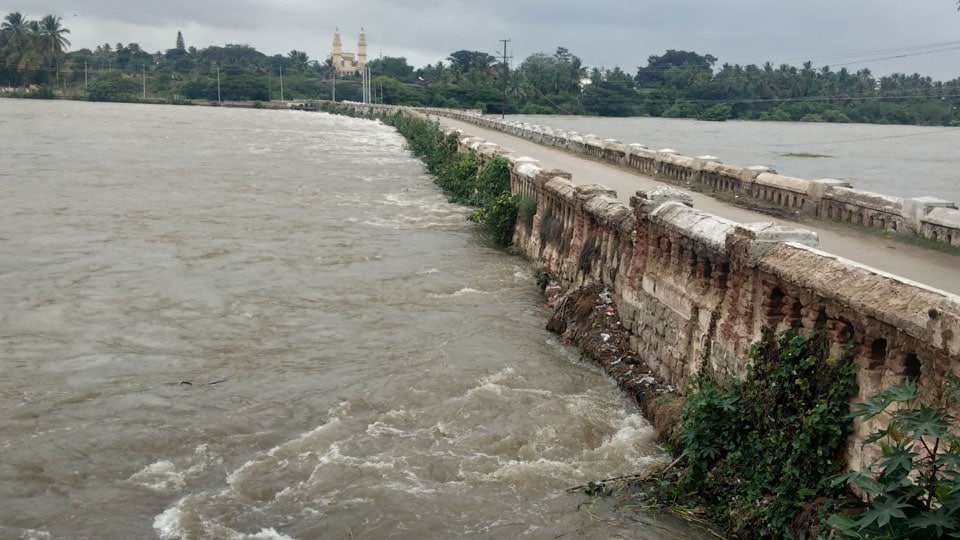 A Bridge too far?

Last Friday I wrote about the impact of human inaction vis a vis the impact of flood waters on the historic Srirangapatna Fort, a stone’s throw away from our city. The fast deteriorating state of another iconic marvel of ancient engineering just outside this fort certainly deserves a mention here with a hope that it will receive some restorative attention from our Government authorities. I am talking about the more than two centuries old Wellesley Bridge across the Cauvery which is commonly referred to as the ‘Haley Setuvey’ by the locals. This bridge was the only conduit across the river at that spot till the year 1967 when the new bridge was opened. It was built at a cost of rupees five-and-a-half lakh around the year 1804 by native workers under the supervision of Dewan Poornaiah during the reign of Mummadi Krishna Raja Wadiyar.

Although the writing is hard to read now with the passage of time, it still has a stone plaque that reads in Urdu and English “Dedicated to Richard Marquess Wellesley, K:P: Governor General of India by Krishnaraja Wodeir Bahaudur in a public testimony of his gratitude and as a lasting monument of the benefits conferred on the people and country of Mysore Begun August 1802 Finished October 1804 under the care of Poorniah Dewan.” I don’t think I’m wrong in calling it an ‘iconic marvel of ancient engineering’ because that is exactly what it is.

Having been built only with roughly hewn granite pillars and lime mortar, it should logically not have had so long a life span against the annual flood waters of the mighty river. But this crude bridge has withstood the onslaught of not just two hundred floods but also the rumble and tumble of traffic of all kinds over just as many years! The massive granite pillars, most certainly, must have been carved and carted from the stone quarries of Chinkurali, a tiny hamlet, again a stone’s throw away which is still the place which yields much of the rough construction stones and rubble that we use in and around our region.

Of late this tiny village has been finding a place in the news every now and then in connection with the ongoing controversy over illegal stone quarrying. Interestingly, all the locals say that while it is only humble stone that is being mined there, legally or illegally, by the contractors, the quarries have in fact become a real gold mine for all those in power… our dear Netas and Babus!

The Wellesley Bridge which is about five hundred feet long is one of the few surviving bridges of its kind in our State with its nearest sibling being the Lushington Bridge, again across the Cauvery at Shivasamudram about thirty miles downstream as the crow flies. A thirty feet long section of this quaint bridge was washed away due to the floods last year but thankfully, repair works to restore it at a cost of rupees five crore have been launched very recently. This bridge was reportedly built in the year 1818 under British sponsorship by Ramaswamy Mudaliar, the Jagirdar of Shivasamudram according to a letter dated July 23rd, 1833 mentioned in the  book ‘A Narrative of a Journey to the Falls of the Cauvery’ by Lt. H. Jervis. It is a little different from the Wellesley Bridge in its design because it does not have the sloping stone slabs serving as buttresses to its pillars at their bases and is also much narrower.

Exactly like in the case of the Srirangapatna Fort the culprit that is most likely posing the greatest threat to the Wellesley Bridge is man’s indifference rather than the impact of flood waters. On many occasions concerned citizens have urged the authorities to act before it is too late to save it.

READ ALSO  One killed, five injured as car topples and falls into canal

Chandrashekar, our former Police Commissioner, too had written in SOM about a year ago about the need to save this bridge but sadly nothing seems to have materialised.  All along its length you’ll find mortar-splitting plants growing from every joint and crevice. The two most notorious ones among these are the humble Banyan and the much revered Peepal which seem to have a preference for showing their grit by growing far from sources of water where nothing else can grow. Otherwise how do you explain their lush green presence atop ancient ruins, tall buildings, temple gopurams and church steeples even through the hottest summer months?

A shining but rather distressing example is of the lush foliage atop the tall and imposing Forbes Transformer Station that I can see from my window even as I am typing this article. Every few months it is chopped off only to spring back with a sneer! And most surprisingly, I am forced to witness this remarkable feat of resurgence while I have to sometimes watch my own potted Peepal Bonsai wilt mournfully if I fail to water it for just two days!

Now, let’s leave aside the marvels and vagaries of nature and return to our man-made marvel. It appears that the Wellesley Bridge is not among the monuments at Srirangapatna which have been entrusted to the Archaeological Survey of India and therefore it is not under any kind of protection or even regular maintenance. But it is time we pressed for its inclusion among the protected monuments so that it continues to stand as one of our dearest heritage structures in all its majesty and rustic charm!