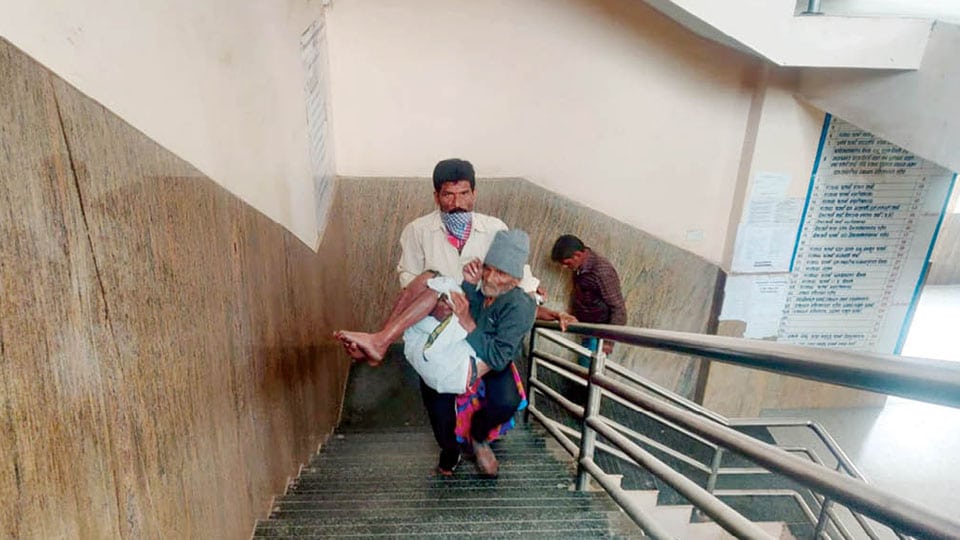 Srirangapatna: Contrary to the claims of the State Government of spending huge amounts on providing better facilities to people coming to Government Offices for grievance redressal, common people are facing tremendous hardships due to the absence of lifts at important offices.

So much so that the elderly citizens have to be physically carried by their attendants to offices that are located on different floors of the Government Office buildings.

The Taluk Office at Srirangapatna, just 15 kilometres from Mysuru, does not have a lift and even after decades, the authorities have not felt the necessity of providing a lift facility for the aged and infirm to reach the offices located on the first and second floors of the building.

Shockingly, there is not even a provision of installing a lift and neither there is a ramp. Ironically, the rule says that all public offices must mandatorily have lifts and ramps even for the elderly and the physically challenged to reach various sections of any Government Office Complex.

Hundreds of people visit the first floor of Srirangapatna Taluk Office where the Sub-Registrar’s Office is located and despite many appeals by the elderly and the physically challenged that they are not in a position to reach that office, nothing has been done so far. The elderly and the physically challenged persons being literally carried to this busy office through the staircase is a daily scene.

Also, the Taluk Office lacks chairs, inadequate drinking water facility and is woefully short in respect of other civic amenities as well. Further, there are no measures in place to ensure following of COVID-19 protocol such as wearing face mask, thermal screening and maintenance of physical distance.

As there is no adequate space for parking vehicles, people visiting the office have to park their vehicles outside and this has pushed the aged and the physically challenged to a lot of inconvenience. Also, everyone must climb more than 15 steps to reach the Sub-Registrar’s office and further climb up to reach other offices.

Tahsildar M.V. Roopa admitted that the public are at a disadvantage due to the location of Sub-Registrar’s Office on the first floor of the building. She further said that the office will be shifted from the first floor to the ground floor, based on  public feedback.

However, the Tahsildar had no answers on the other offices located on the first and second floors of the building and are frequented by many people on a day-to-day basis.