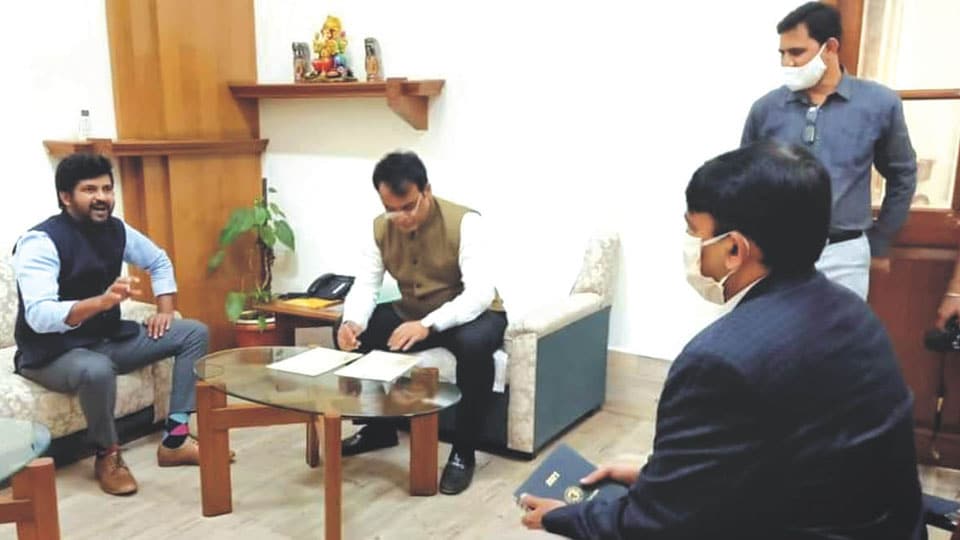 Submitting a memorandum to the Minister, the MP also urged the Minister to set up a Coding Academy and Incubation Centre in the campus of Karnataka State Open University (KSOU), Mysuru.

The MP said that the establishment of another Maharani’s College in N.R. Constituency would provide education to thousands of girls who come from minority community and poor backgrounds.

In his memorandum, Pratap Simha also urged the Minister to set up a New Age Coding Academy on the lines of Ecole-42 in Paris. “We intend to set up this Coding Academy and Incubation Centre in partnership with Ecole-42 and the authorities there have agreed in principle to partner with us in Mysuru. The proposed project is of immense value in skilling up and empowering the youth. For this proposal, we require infrastructure and academic support from the Government through KSOU,” the MP stated.

The KSOU has 20 regional centres across the State with state-of-the-art infrastructure and the institution can award students with diploma certificates after training them with computer programming and core computer engineering skills that will make them future ready especially in areas of Data Science, Artificial Intelligence, Python, Algorithms design and functional programming, the MP said.

“This will be the first-of-its-kind Coding Academy in India and the first Incubation Centre in Karnataka with special emphasis on agriculture start-ups. It will have intense internship, corporate engagement and admission process is rigid that will be system-driven to select students based on their aptitude,” he said and added that the KSOU campus was best suited for such an Academy.