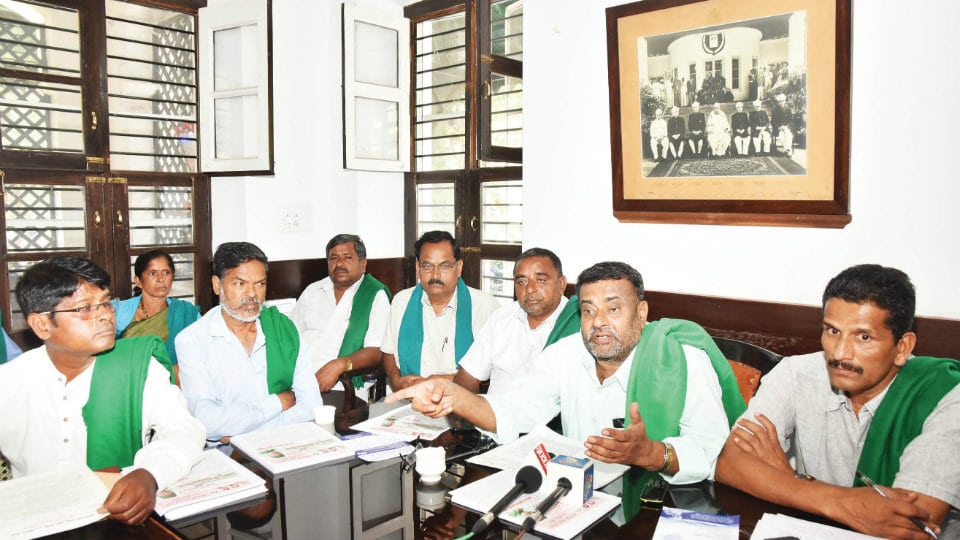 Mysore/Mysuru: Alleging that the recent amendment made by the Karnataka Government  to the APMC (Agricultural Produce Marketing Committee) Act is detrimental to the interests of the farming community, the KRRS (Karnataka Rajya Raitha Sangha), in association with All India Farmer Movement Co-ordination Committee, will stage a nationwide demonstration on May 27.

Announcing this at a press meet at Jaladarshini Guest House here on Saturday, KRRS State President Badagalapura Nagendra said that farmers will stage a demonstration in front of the Deputy Commissioner’s Office and Taluk Offices in all districts of the State from 11 am to 12 noon on May 27, during which a memorandum will be submitted to the Government asking it to address all agrarian issues and come to the aid of distraught farmers.

Accusing the State Government of bowing to the pressure of the Centre in passing the ordinance to amend the APMC Act, Nagendra claimed that the amendment was anti-farmer and opens the door for the trading community to exploit the farmers.

Continuing, he said that the amendment not only hurts the farmers but also all others concerned with the APMC Market such as loaders, labourers, daily wagers, street vendors and small traders.

Maintaining that the Government should have ensured more stringent enforcement of the RMC Act, rather than amend the APMC Act, to punish those indulging in cheating and exploiting the farmers, he alleged that the State Government was out to benefit unscrupulous traders and capitalists.

Reacting to reports that Chief Minister B.S. Yediyurappa was not in favour of amending the Act but ultimately consented buckling to the pressure of the Centre, Nagendra said that speculations about this is doing rounds within the Chief Minister’s  close circles and he does not know the truth about it.

Alleging that the APMC Act amendment also threatens food security and food culture of the State, he asserted that the amendment enables capitalists to gain monopoly over all farm produce besides proving highly disadvantageous for consumers too.

Terming the Government’s recent actions of amendments to APMC Act, Labour Laws, Land Reforms Act and Land Acquisition Act as anti-democratic and anti-people, he said that the modalities for staging massive protests will be chalked out at a meeting to take place at CPI(M) Office in Bengaluru on June 10, which will be attended by a host of farmer organisations, labour unions and social groups.

KRRS office-bearers M.S. Ashwathnarayan Raje Urs, Hoskote Basavaraj and others were present at the press meet.