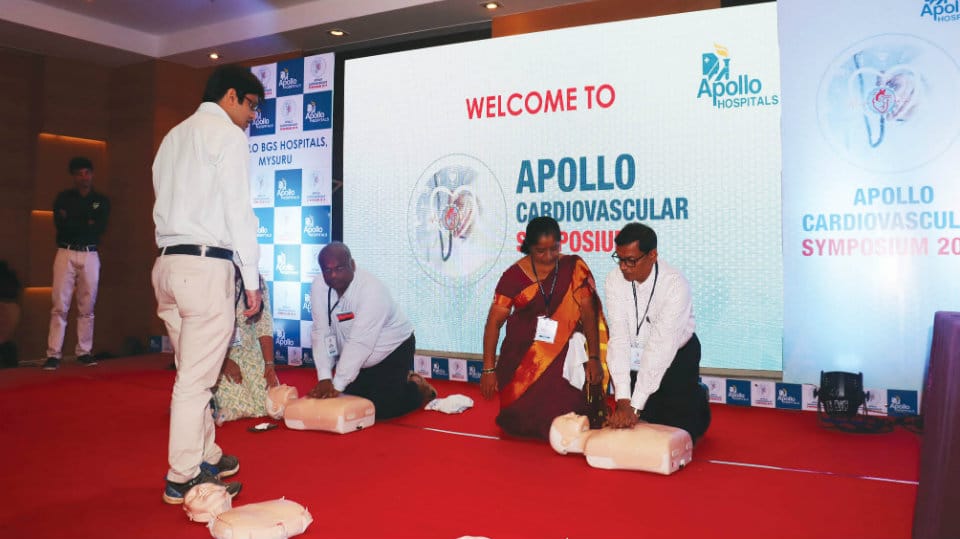 More than 250 doctors from Mysuru and surrounding places attended the symposium, which enhanced the knowledge of doctors on the relationship of cardiology with other fields of medicine.

The following doctors presented papers on various topics at the symposium:

“Cardiovascular diseases have been a global burden and have increased the mortality rate in the past decade. To reduce this, ACVS-2019 was presented to the Doctors. ACVS is being conducted since five years. This year, the hospital conducted a special event that is Basic Life Support (BLS) training for the press reporters and Advanced BLS training for doctors,” said Dr. Arun Srinivas, Chief Cardiologist.

The event started with BLS training for more than 30 press reporters in the morning where they were trained to provide BLS in case of medical emergencies. BLS training for press reporters included training in CPR, how to handle road traffic accidents? What to do when someone is choking? During a snake bite, during an electric shock and many more. Not only they were trained but they were also given hands-on training to do CPR.

Along with this, the Doctors were given Advanced Basic Life Support training in the afternoon which was followed by a formal inauguration.

Our emergency team will be at your doorstep in just a call away in case of any medical emergencies with ambulance services and critical life saving equipments manned by trained medical and paramedical staff. Apollo BGS Hospitals also accepts all Government schemes for the convenience of patients.