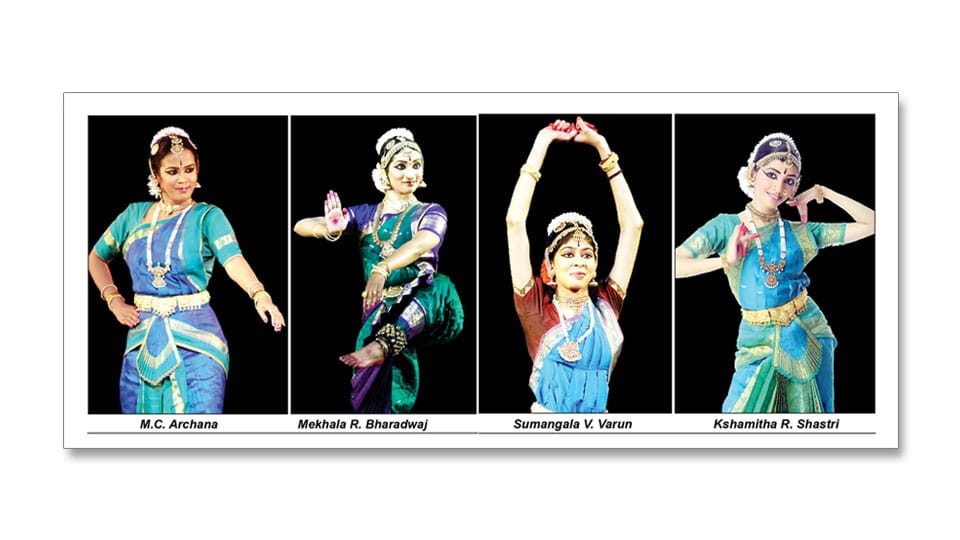 Archana, initiated into Bharatanatyam by Guru Padmini Ravi, is now furthering under Karnataka Kalashree Guru Kiran Subramanyam and Guru Sandhya Kiran. She presented her Rangapravesha in the year 2012. She has completed both Junior and Senior Grade exams with flying colours. She has also been recognised as a ‘B’ grade artiste of Doordarshan.

Mekhala Bharadwaj, after initial training in Bharatanatyam under Guru Chetana Radha Krishna, Guru Prakash S. Iyer and Guru Kripa Phadke, is now pursuing the art under the renowned Guru B. Bhanumathi and Guru Sheela Chandrashekar of Bharathanjali, Bengaluru. She has picked up some finer nuances in Guru Bregha Bessel.

Sumangala Vijaykumar Varun had her initial training in Bharatanatyam with Gurus Prathama Kiran and Praveena Mohan at Kalanidhi, Manipal.

She has been under the tutelage of Nrithyashiromani Guru Vidu. Rekha Dinesh Kumar (Founder and Artistic Director), Bengaluru, for the past eight years at Benaka Natya Mandir.

Sumangala has attended workshops of senior Gurus including Guru Bragha Bessell, Guru Vid. Shankar Kandaswamy and Guru B. Bhanumathi to polish her nritta and abhinaya. Sumangala is a trained Karnatak vocalist, and is a yoga practioner.

Kshamitha Shastri was initiated in Bharatanatyam by Guru Revathi Prasad and then under Karnataka Kalashree Guru Suparna Venkatesh at the Sai Arts International, Bengaluru.

Kshamitha has extensively performed across India and abroad and has secured 6th Rank in the Senior Exam in Bharatanatyam conducted by the KSEEB. A recipient of Karnataka Nrutyakala Partishath Scholarship, she is also a Kathak artiste trained under Guru Mysore B. Nagaraj.