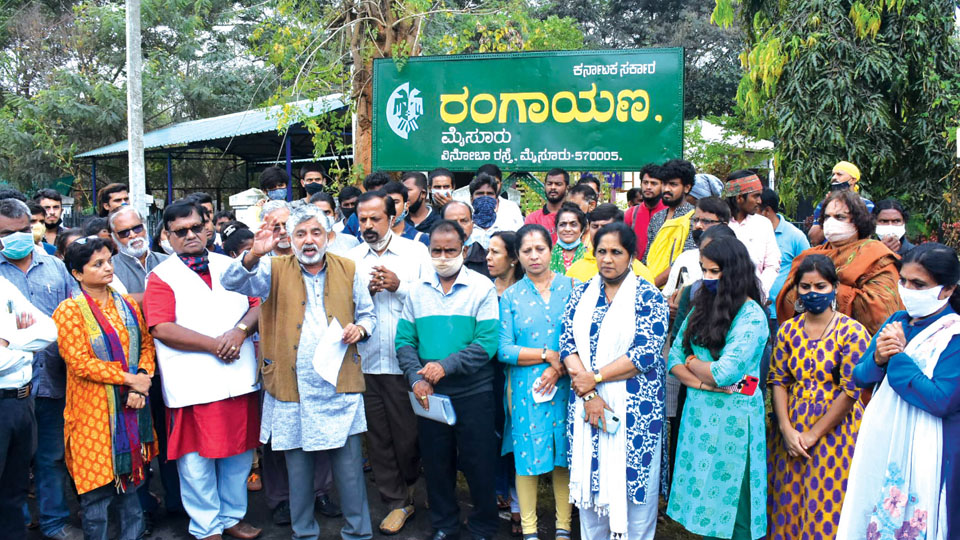 Mysore/Mysuru: In a bid to step up pressure on the Government to name the road running in front of Rangayana, that connects Hunsur Road (Vinoba Road) with Kukkarahalli Lake Gate Junction (near Railway Crossing), over a hundred Rangayana artistes and other theatre personalities held a campaign (Abhiyaana) in front of Rangayana here on Thursday.

Addressing the gathering, Rangayana Director Addanda C. Cariappa said that the great theatre Director Padma Shri B.V. Karanth was called as ‘Ranga Bhishma’ and was honoured with the coveted Padma Shri award by the Government in recognition of his services to the theatre.

Maintaining that B.V. Karanth was instrumental in the setting up of a theatre repertory of national repute  here, he said that  it is apt to name the road that shoots off from Hunsur Road at Kalamandira Junction and connects Kukkarahalli Lake Gate, after B.V. Karanth.

Noting that this road runs right in front of Rangayana, he said that the naming of this road after B.V. Karanth would be a befitting honour to the late theatre director. Cariappa also urged the Government to name the Hunsur Road Junction in front of Kalamandira Main Gate as B.V. Karanth Circle.

Pointing out that several representations were made to the Mayor, MCC Commissioner and the Legislators in this regard in September itself, Cariappa said that it is unfortunate that the MCC Council meeting held on Dec. 29 did not discuss the issue.

However, another memorandum will be submitted to the MCC seeking to name the road running in front of Rangayana after B.V. Karanth, he said.

Pointing out that Rangayana artistes will be forced to chalk out future plans of peaceful actions if the demand was not met, he declared that a ‘B.V. Karanth Road Horata Samiti’ would be constituted to take the issue to its logical end.