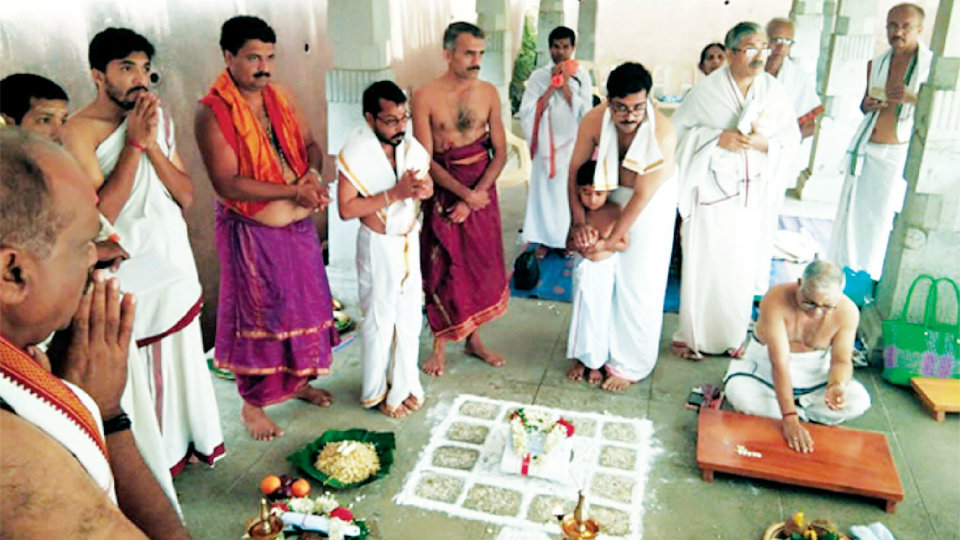 Madikeri:  A three-day Ashtamangala Prashne ritual began yesterday at Talacauvery under the guidance of A.V. Narayana Poduval and team of Payyanur in Kerala. The ritual is being held to find out solutions to problems, if any, in Talacauvery.

The octagonal questioning ceremony (Ashtamangala Prashne) was initiated on the day that marked the beginning of ‘Tula Raashi’ to ensure smooth functioning of the pilgrim centre. The religious ceremony started with Vamshith, a boy from Tannimani village, offering prayer to the astrological, octagonal sketch.

Prayers were offered to Dakshinamurthy, Cauvery and Agasthyeshwara in the north-east direction and the astrologer is said to have experienced a spiritual vibe during the prayers. The octagonal questioning will continue for another two days at the pilgrim centre before starting off with the religious, ritualistic puja offerings to river Cauvery.

During the Ashtamangala event, it was revealed that the sanctity of Talacauvery, the birthplace of River Cauvery, is being repeatedly violated by indiscriminate tourism. The centre has turned commercial with even rituals like “Tula Bhara” being used at the temple with the sole intention of making money.

The place has turned into a tourist attraction over the years rather than being a religious place, the Ashtamangala questioning revealed.

It was also revealed that though there are designated places for the tourists to sit, they sit in all places, even near the Holy Kundike, inside the temple complex, spoiling the sanctity of the temple. Also, women come to the place dressed inappropriately.

The Holy Kundike from where the river emerges must not be closed and must be left open for the sun’s rays to penetrate. Also, the practice of the priests allowing devotees, especially VIPs, to stand around the Kundike for hours together must be stopped. Devotees must not be allowed near the Kundike and people must leave Talacauvery after sunset. All these practices that were strictly followed since ages are not being followed now, the Ashtamangala questioning revealed.

The main astrologer from Kerala A.V. Narayana Poduval was assisted by Mysuru lecturer M. Shyam Sundar Shastri, who translated the proceedings to Kannada. The puja was conducted by priest Prashanth Achar.

The octagonal questioning and predictions is usually conducted at Talacauvery once in every decade and the Talacauvery Bhagamandala Temple Committee President Biddatanda S. Thammaiah said that the last prediction was made when the temple was renovated, which was 12 years back.

“The Ashtamangala Brahmakalasha ceremony was conducted before starting religious offerings to the Goddess. It is a ritual to conduct this ceremony as it will guide us through any wrong doings at the pilgrim centre. She (Cauvery) is a lifeline to many people and it is the Committee’s duty to maintain the sanctity of the place and see that all divine ceremonies are conducted in the right way,” he added.

Talacauvery
Monsoon to arrive in Karnataka on June 5
President’s rule would have been right, says former Chief Election Commissioner