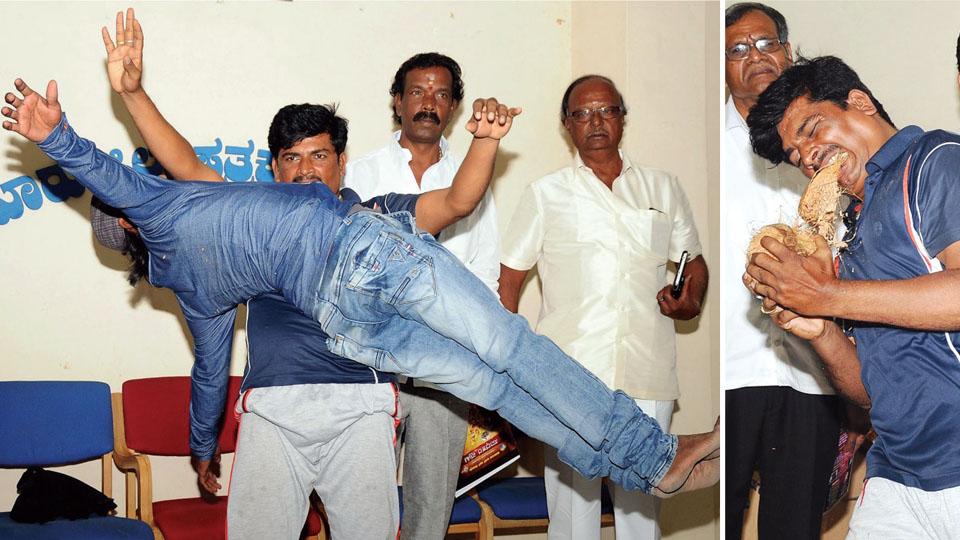 P.J. Gautham Verma, a native of Patlu village in Channapatna taluk in Ramanagaram district, who has to his credit two Limca Book of World Records, two Limca Records and a Guinness World Record, is the man who demonstrated his skills at Pathrakartara Bhavan here yesterday.

Gautham, who lost his mother when he was two-year-old, lost his father about 15-years ago and his four brothers took care of him. He said that because of their support he has become successful and added that he has opened a private school in Bidadi from where he earns his livelihood.

Gautham said that he was inspired by George, a Keralite, who created a record by de-husking three coconuts in five minutes in 1996 and added that he began practicing de-husking coconuts using his teeth for four years before he made his first record in the year 2000.

He said that he now has the potential to de-husk 45 coconuts in a minute and lift a maximum weight of 80 kgs using his teeth. Gautham further said that he is engaged in yoga, facial exercise and other fitness exercises to improve his physique and added that he has been practicing for about one-and-a-half-hours daily.

De-husked 51 coconuts in 38 minutes in 2000 and created a Limca Book of World Records.

Pulled a Maruti 800 car for a distance of 157 metres in 2 minutes 18 seconds using his ears in 2002 and entered the Limca Book of World Records.

Stuffed 300 straws in his mouth in 2005 and created another Limca Book of World Records.

Climbed a coconut tree with a bicycle in his mouth in 2014 to create another record in 2014.

Created Guinness Book of World Records in 2014 by de-husking three coconuts in 42 seconds.