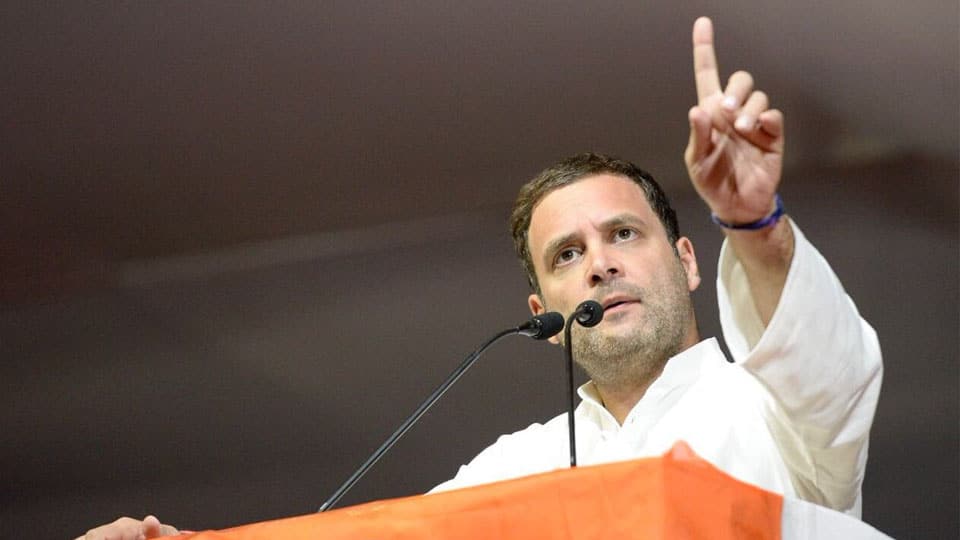 Looking beyond a sham Election

No harm would have come to the Congress Party if Rahul Gandhi was named President one fine morning. Much harm was done to its image by staging a charade of an election. As many as 89 sets of nomination papers filed for Shri Gandhi. Not even one nam-ke-wastay opponent. (Dissidents? What dissidents?) The party’s dutiful “Central Election Committee” wanted a day to scrutinise the papers. A deadline was fixed for withdrawal of nominations. Then voting. Who were they trying to fool? Why?

Among the first to react was Mani Shankar Aiyar, the Congressman who has just lost his Congressmanship. Off-centre as ever, he underlined the meaninglessness of the election by proclaiming that Rahul’s elevation was as natural as Mughal succession. “After Jehangir, Shah Jehan came. Was an election held? After Shah Jehan it was understood that Aurangazeb would be the leader.”

Understood by whom? There was a bit of humbug there introduced by Mani. The Mughals had no tradition of passing power from father to son. Shah Jehan did want to crown his eldest son Dara Shikoh, a thinker and religious liberal though poor in military matters. The ambitious Aurangazeb defeated various opponents, then turned on Dara accusing him of being no longer a Muslim. Dara was betrayed by a General and was eventually executed. Aurangazeb cut his brother’s head and sent it to his father detained in Agra Fort.

So why did Mani compare Rahul Gandhi’s succession to that of Aurangazeb? Nothing disloyal, to be sure; he is known as one of the few civilised men in politics. But he loves intellectual mischief, as most intellectuals do. He probably wanted to give another handle to his nemesis, Narendra Modi, and watch the fun. He did that once by revealing something nobody had noticed till then – that Narendra Modi began as a chaiwalla. The Modi juggernaut used that bit with great success. Naturally,  Modi seized the Aurangazeb bit as well. He has been having a ball comparing the Congress with the Mughals.

Of course, the BJP has no moral right to criticise Aurangazeb in the Congress when its own leaders are saffron-clad Aurangazebs. Were L.K. Advani and Murli Manohar Joshi sent to pasture through an election? How many BJP Chief Ministers became Chief Ministers through inner-party elections? The Indian voter is not dumb. He and she can see the hypocrisy of one party accusing another of wrongdoings when all of them wallow in wrongdoings. Dynastic autocracy is no different from personality-based autocracy.

Fortunately, for the Congress, its tactical mistakes have not so far dented the image-boost that Rahul Gandhi acquired in recent months. The rise of Patel politics in Gujarat and the remarkable electoral setbacks the ABVP, the student wing of the BJP, has suffered in Delhi, Hyderabad, Varanasi, Rajasthan, Guwahati and even the Central University of Gujarat point to a trend. Modi will remain unbeatable in oratory. But recent events show that, without oratory, his opponents can attract some attention.

Image matters in public life: Richard Nixon’s camera-unfriendly “7 o’clock shadow” undid him before the fresh and friendly face of John Kennedy. Modi’s dreamlike idealism will remain unrivalled, but it can no longer be separated from the image of Amit Shah who has become his alter ego. Nor can he escape from the negative vibes produced by his Finance Minister who goes on introducing half-baked reforms, then keeps correcting them in bits and pieces, all the time claiming superior wisdom incomprehensible to ordinary mortals. Image matters — and the image of the Government today is not what it was yesterday.

Opposition forces have gained ground support in Gujarat, but Gujarat is one State the BJP simply cannot afford to lose. If they lose Gujarat, they lose India. So they will use every trick in the book and then some to win. They have already got help from squirrel parties like NCP and AAP who will field their own squirrels and thus split anti-BJP votes. BJP strategists must now protect EVMs to prevent Hardik Patel from tampering with them, and protect the Election Commission also to prevent Alpesh and Jignesh from misusing it. Got it?

For Rahul Gandhi,  a setback in Gujarat will not be the end of the road. It will be the beginning of a new journey. Everyone is looking for a New India. The BJP spoiled its chances by equating New India with patriotic lynchings.

A new Congress can seize the opportunity.

15 COMMENTS ON THIS POST To “Looking beyond a sham Election”