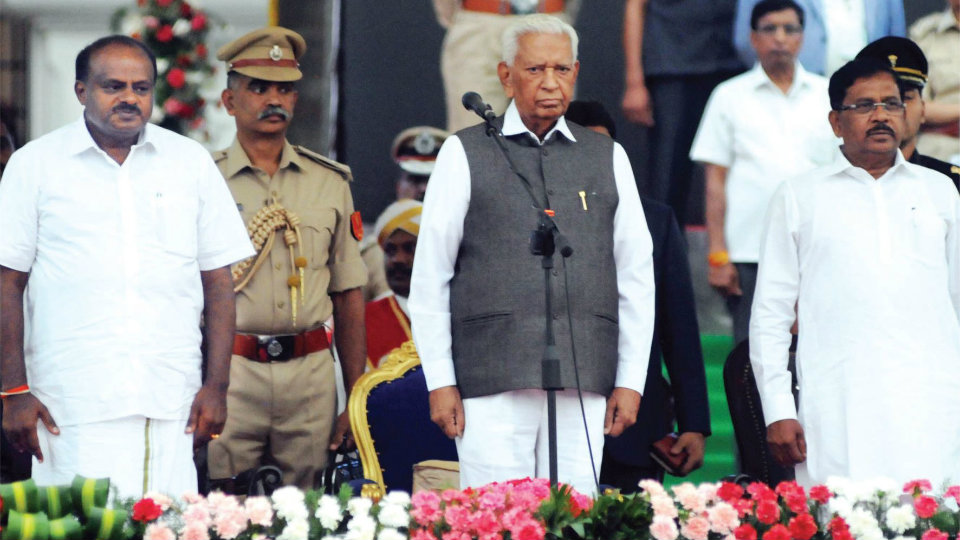 Bengaluru: Janata Dal State President H.D. Kumaraswamy (HDK) yesterday took oath as the 25th Chief Minister against the imposing backdrop of Vidhana Soudha in the presence of more than a dozen non-BJP leaders from across the country.

Kumaraswamy was administered the oath of office and secrecy at 4.30 pm by Governor Vajubhai Vala at a grand ceremony in the presence of a galaxy of national and regional leaders from across the country. This is Kumaraswamy’s second stint as Chief Minister, the first also being in a coalition set up when the JD(S) had allied with (and later deserted) the BJP in 2006.

Senior Congress leader Dr. G. Parameshwara was sworn as Kumaraswamy’s Deputy by Governor Vala. Other members of the Council of Ministers in the alliance will be inducted after Kumaraswamy proves his majority on the floor of the Assembly on May 25 (tomorrow).

Attired in the traditional white silk shirt and dhoti, Kumaraswamy took the oath in the name of God and the people of “Kannada Nadu”. Kumaraswamy, who had patched up with the Congress at the last minute last week to block the BJP, had been keen to turn the event into a springboard for opposition unity that his party would hold till next year’s Lok Sabha elections.

UPA Chairperson Sonia Gandhi and son Congress President Rahul Gandhi, who were seen to have bent backwards to give Kumaraswamy the lead role in the government, were there. So were Chief Ministers Mamata Banerjee (West Bengal), Arvind Kejriwal (Delhi) and N. Chandrababu Naidu (Andhra Pradesh) along with Samajwadi Party’s Akhilesh Yadav and Mayawati of the Bahuja Samaj Party.

The JD(S)-Congress alliance leaders had brought its legislators to the venue since they have been isolated in city hotels to ensure they are not poached before the test of strength in the Assembly. All MLAs who were confined at luxury hotels in Bengaluru were brought in three buses. Soon after the event was over, the legislators were promptly bundled back into the buses. The party has decided to keep the legislators confined until after the coalition government proves its majority.

National leaders of other parties were personally greeted by former Prime Minister and Kumaraswamy’s father H.D. Deve Gowda who is also the JD(S) supremo. Deve Gowda was seen moving briskly across the stage to greet the leaders cutting across party lines. He seemed to take a liking to former Uttar Pradesh Chief Minister Akhilesh Yadav whom he hugged and patted him on the back.

The event was high on symbolism. The swearing-in ceremony was the first joint public appearance by Uttar Pradesh’s bitter rivals-turned-allies, Akhilesh Yadav and Dalit powerhouse Mayawati shared the stage. Akhilesh Yadav warmly greeted her and later, stood next to her, waving to the cheering crowds. Mayawati, who has promised to continue her alliance for next year’s Lok Sabha elections, had a pre-poll alliance with JD(S) in Karnataka.

The many photo-ops and the bonhomie among the parties on stage, however, is no indicator that other rival non-BJP parties too will come together. West Bengal’s Mamata Banerjee and CPM’s Sitaram Yechury were there and at one awkward moment, even came face to face. They politely greeted each other, shook hands and walked away.

The entire Gowda clan was on the grand steps of the Vidhana Soudha to witness the oath-taking. The family, including Kumaraswamy’s brothers and the younger generation comprising Prajwal Revanna and Nikhil Kumaraswamy.

I am a child of circumstances, says Kumaraswamy

In his maiden press conference held soon after the swearing-in ceremony, Kumaraswamy described himself as a “child of circumstances” for having emerged as the ‘king’ once again in a coalition setup. He said that his government will be “governance oriented” and will not indulge in politics.

Kumaraswamy said that in addition to continuing with the previous welfare schemes, many new programmes would be added by the coalition government headed by him. He said that though he was not “independently” running the government, he would ensure that his administration would be “pro-people”.

The election to the post of Speaker will be held at 12.15 pm on May 25 before Kumaraswamy takes the floor test. Senior leader K.R. Ramesh Kumar of the Congress and A.T. Ramaswamy of the JD(S) are tipped to occupy the post of Speaker and Deputy Speaker respectively.

The BJP boycotted the ceremony and observed an ‘anti-people mandate’ day during which it held state-wide protests against the new coalition government, which it called “unholy”

The swearing-in Kumaraswamy may have been projected as a show of opposition unity ahead of the 2019 general elections, attended by a galaxy of non-BJP leaders. But West Bengal Chief Minister Mamata Banerjee reportedly did not seem entirely happy with the traffic arrangements made for the gala event.

Sources said Banerjee had to walk a short distance to reach the oath-taking venue as some vehicles had blocked the route. A video that captures Banerjee entering the venue shows her gesturing her displeasure to Karnataka Director General and Inspector General of Police N. Neelamani Raju, as the Trinamool Congress Chief walked on a red carpet rolled out for the visiting dignitaries.

Delhi Chief Minister Arvind Kejriwal and some leaders of Aam Aadmi Party (AAP) didn’t seem to have any reservations walking to the oath-taking ceremony. AAP spokesperson Raghav Chadha, who accompanied Kejriwal, tweeted saying they chose to walk up to a kilometre to beat the traffic.

Actor-turned-politician Kamal Haasan could not make it in time for the ceremony as he was caught in a traffic jam. Haasan, however, did make it for the high tea and interacted with leaders.

Even former Chief Minister Siddharamaiah was forced to take a backseat. Though it was a Congress-supported JD(S) government, Siddharamaiah, who led the Congress campaign, was found mostly remained seated even amid the flurry of activities.