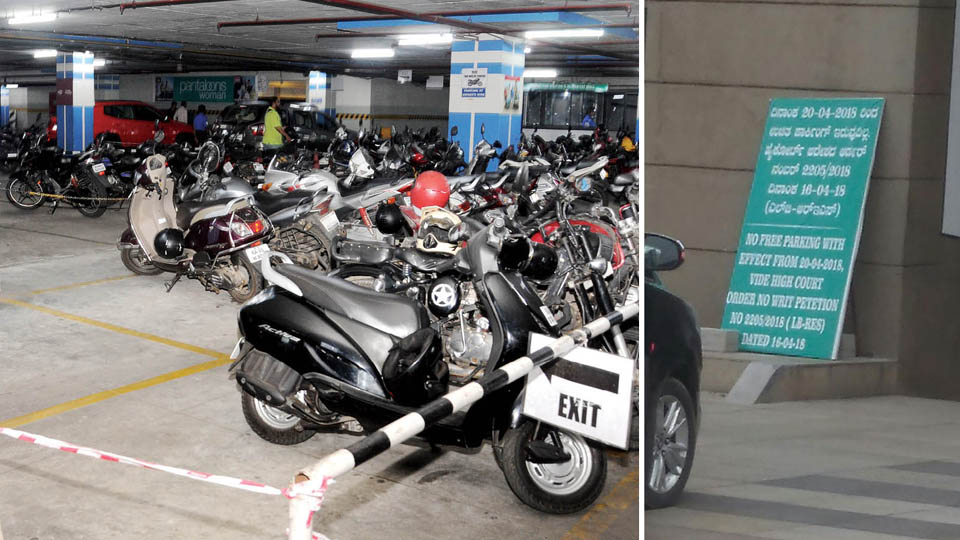 Mysuru: Has the Mysuru City Corporation (MCC) failed in implementing its ‘no parking fee’ rule that was passed less than a year ago? This is the question that is being asked by citizens who are being charged parking fee at malls and commercial complexes.

Though the MCC, on Nov. 27, 2017, had passed an order making it mandatory for business establishments such as malls to stop collecting parking fee, it is business as usual for parking attendants as they have continued to collect parking fee from motorists.

On their part, the mall authorities are saying that they had got a stay from the High Court on MCC’s rule and they are authorised to collect the parking fee. They have put up notice boards at the entry of their basements informing customers about the Court stay and the rates fixed for vehicle parking. The MCC, however, has said that parking is free and there is no Court stay.

Soon after the rule came into effect last year, when malls did not stop the practice of collecting parking fee, the MCC had issued notices to some commercial establishments, asking them to comply with the order and even warned of legal action if they violate the rules.

Just six months into the implementation of the rule, parking fee is being collected at malls. Many residents have complained to SOM that B.M. Habitat Mall and the Mall of Mysore charge parking fee despite MCC ban. Malls are charging fee anywhere between Rs. 20 for two wheelers (per hour) and Rs. 40 for four-wheelers and an additional Rs. 10 for the extra hour.

Apart from Malls, some movie theatres and hospitals too collect parking fee, violating the Mysuru City Corporation (MCC)rule that has stipulated that the space of commercial buildings should be earmarked for parking of vehicles and parking fee must not be levied. 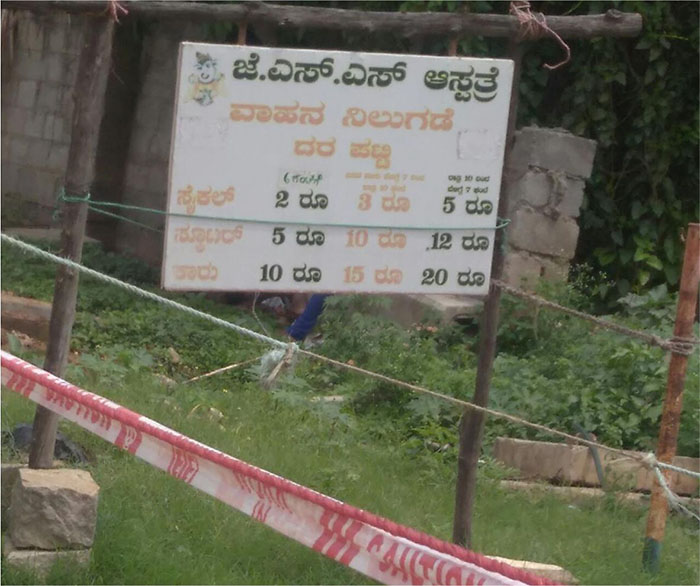 Forum City Centre Mall does not charge parking fee for the first one hour. However, it charges Rs.20 for four-wheelers and Rs.10 for two-wheelers after the stipulated time.

Clarifying on the issue, Vinay, the Manager of Habitat Mall, told SOM that they had got a stay from the Karnataka High Court and as the stay is in force, they are authorised to collect the parking fees. “We have got the stay recently and we have been charging parking fee for two and four-wheelers since then. The stay order has been handed over to the MCC Zonal Office under whose jurisdiction our Mall comes,” he said.

MCC Revenue Deputy Commissioner T.B. Kumar Nayak, however, said that the ‘no parking fee’ rule is in vogue in all commercial buildings including Malls that come under city limits. “Whichever commercial establishment has taken building licences from the MCC, they are bound to obey the rule. We will act against such establishments if they flout the order,” he said, adding that basements are not meant for trade if the purpose for which the licence was taken was for providing parking.

When asked about the Court stay on the MCC rule, he said that the Court has not issued any such stay.

“We have not got any copies of the stay order. If the Mall has brought a stay, they must inform us first and provide the copies instead of arbitrarily collecting the fee. We will check on this and will issue notices if the MCC rules are violated,” he said.