Home » Feature Articles » Audience hitched onto a state of bliss 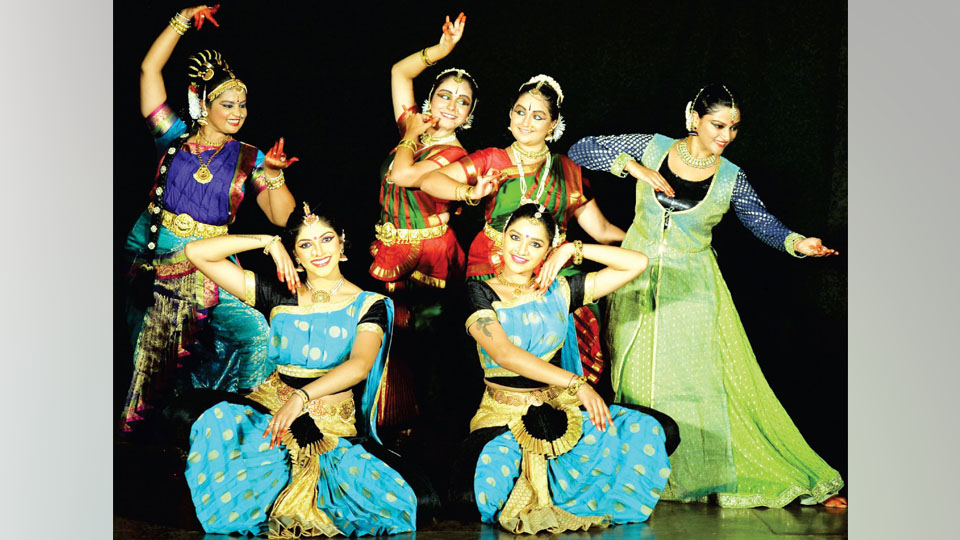 Audience hitched onto a state of bliss

On 20th May 2018, at Veene Seshanna Bhavana, Ganabharathi, Mysuru, Articulate Festival saw the 24th edition where four classical dance segments were lined up for the evening that saw two duet presentation in Bharatanatyam, solo artistes in Kathak and Kuchipudi.

Shwetha K. Purohit and Sindhu K. Purohit, disciples of Karnataka Kala Tilaka Guru Radha Sridhar, danced into the hearts of the audience through their crisp, clear and confident Bharatanatyam performance, both individually and as duet, extremely complementing each other in every dance stance.

The sisters presented two dance numbers from their Bharatanatyam repertoire, one a Kruthi of Sri Duraiswami Aiyyer and another of Sri Udumalai Pettai Narayana Kavi, while the first was in Raga Pharaz the other was in Ragamalika and both in adi tala. The chosen first was on Shiva and the second was in praise of Lord Vishnu.

In the composition “Aadenamma,” ecstatic Parvathi describes the mystifying looks of Shiva and his dance and savours the Nine rasas that awaken in her, as she is enraptured by the smiles of her Lord, the killer of Tripurasura. The mother joins her divine consort in that blissful dance.

The second composition “Paalkadal” is from the perspective of a devotee of Vishnu. The Lord Reclining on the serpent, attended by Laxmi herself and floating on the waves of the ocean of milk, Lord is sought for protection and grant of wisdom and means to reach His lotus feet. In the delineation of the poem, the dancer runs through the select ten avatars of Lord Vishnu.

Akhila Deepak, trained Under Karnataka Kalasri Guru Lakshmi Rajamani, was just amazing. She chose to present a Krishna Shabdam and a Tarangam, both based in Mohana raga and adi tala. Krishna Shabdam dominated by abhinaya, that was sassy, tarangam was acrobatically nrutta. Akhila Deepak reflected so perfectly the unabashed invitations a gopi was extending to krishna for a amorous rendezvous interspersed with nrutta that complimented the sahithya. In the second number of her Kuchipudi presentation, while perched on the rim of a brass plate, balancing a water pot on her head, dexterously making rhythmic movements, she esoterically conveyed the philosophical significance that: “We are all bound to this earth (the brass plate under the feet) and we carry heavy responsibilities on our head (signified by the water pot, from which not a drop is supposed to spill). But just as she moves joyously in rhythm, her mind in glorious contemplation of God, she says, so too should life be lived, with grace, energy and good purpose.

Amita Mathur trained in Kathak under Guru Nirupama Rajendra and furthered her art under various stalwarts of the art form, bestowed with all that is necessary for an artiste to capture the attention of the audience and linger long in their minds long after the concert closes.

Amita began with a Krishna Vandana in Teen Taal that meandered languorously between vilambit Laya and drut Laya in a highly, stylized Kathak. In the vandana, Amitha described the beautiful form of Krishna and demonstrated his leelas so subtle that the vision was dreamy and ethereal. The second of her presentation was “Rasa” celebrating kathak while exploring the space to the music, the dancer claimed this was Kathak in its inert form, but with different treatment. Her Teen Taal Tarana in raag Yaman was very very short but yet crisp.

Guru Dr. Sanjay Shantaram’s disciples Anjali Srikant Iyengar and Neethu Anand’s duet Bharatanatyam performance was a befitting finale number that the audience left the hall with these enactments playing in their delirium. While the chosen first, eulogised the virility and vibrancy of Lord Shiva, the second meditatively dweled on the serene and composed Sri Rama. Apart from statuesque poses that the Jathis were concluded or connected through, being highly exciting to watch, the enfoldment of stories was equally exhilarating. Be it the fleeting enactment of Shiva’s protection of Markandey when he was fated to be taken away by the Lord of death in the Bhatiyar-Palini raga based and Adi tala set composition “Parshwapathe Shambho”, or in the Yaman Kalyani raga, Adi tala composition “Rama Rama Endu” penned by Dr. Sanjay Shantaram himself, the pain Sri Rama endured while in search of Seeta and his interaction with Shabari, Jatayu before he faced Ravana only to vanquish him, the sancharis were executed brilliantly by both the artistes.

Festival Director Mysore B Nagaraj invited the audience to experience the same in the coming festival when he would present senior stalwarts Guru Shama Bhate, Guru Deepak Mazumdar and Padma Shri Ranjana Gouhar in Kathak, Bharatanatyam and Odissi through Satvik abhinaya on June 17. The audience fixed a cultural tryst for that date.